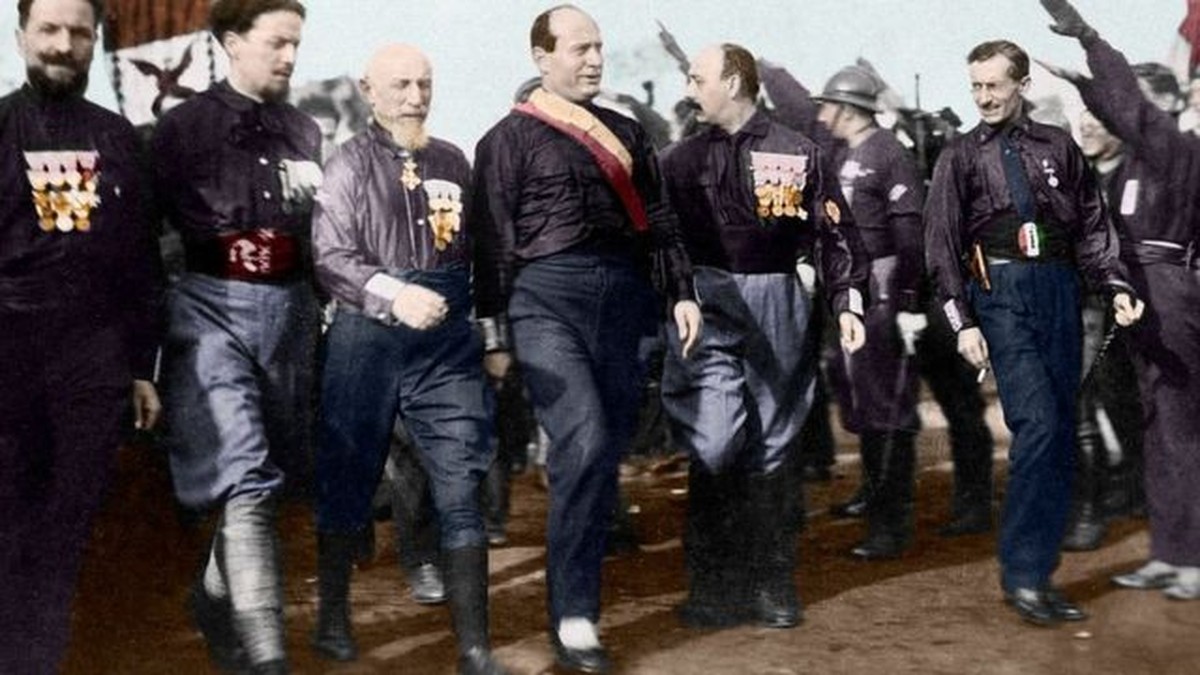 100 years of the March on Rome: how Mussolini came to power and installed the 1st fascist government | World

“Either give us the government or we will go to Rome to take it.”

With these words, on October 24, 1922, Benito Mussolini called on his followers – many of them armed – in the Plaza del Plebiscito, in Naples, to take the Italian capital to pressure King Victor Manuel III to hand over power to him.

His National Fascist Party (PNF) was, at the time, a fringe force in Parliament, with just 35 out of a total of 535 deputies. The threat was serious, but few took it seriously.

And, to the surprise of even his own followers, Mussolini, who was a journalist and former socialist revolutionary, achieved his goal and installed the first fascist regime in history.

Its success would end up having serious consequences, not only for the country, but for the rest of Europe and the world in the years that followed.

On the eve of completing 100 years of these events, BBC News Mundo, the BBC’s Spanish service, spoke with historians, analysts and political scientists to delve deeper into what happened.

The so-called March on Rome was an operation led by Mussolini to seize power with an insurrection.

The mobilization took place between October 27 and 28, 1922, when dozens of fascist militiamen, known as “black shirts” because of their uniforms, began to take over towns and villages in northern and central Italy, deposing their legitimate authorities and invading offices. military and police.

Thousands of fascists, some armed, marched into the Italian capital in 1922, bringing down the government of Prime Minister Luigi Facta, meeting almost no resistance.

After taking control of cities such as Pisa, Florence and Cremona, in some cases violently, the “Black Shirts” – some, armed with bayonets stolen from the law enforcement forces, but most with shotguns, pistols or clubs – headed for Rome. .

In the capital, then Prime Minister Luigi Facta ordered the army and police to stop Mussolini’s hordes from entering “by any means”. And on October 28, he presented the king with a decree declaring a state of siege, which would allow him to stop the insurgents.

But the monarch did not sign the document. And, in response to the negative, Facta resigned.

A day later, Vítor Manuel 3° handed over the government to the leader of the rebels, who at first refused due to the conditions imposed by the king to share power with more moderate sectors. The king then withdrew from the conditions and Mussolini, who was in Milan, traveled to Rome to accept the “offer”.

Even achieving their objective, the fascists ended up invading the Eternal City and, on the 31st, they paraded through the Quirinal Palace, which was then the royal residence.

“One of the central myths of fascism was its assault on power in October 1922. In fact, power was handed to them on a platter,” explains historian Álvaro Lozano, author of the book Mussolini y el Fascismo Italiano (“Mussolini and Italian Fascism”, in free translation).

Lozano says that the march was far from the epic presented by his followers.

“After days of torrential rain on Rome, its members were nothing like Caesar’s legions, as Mussolini dreamed,” he says.

Mussolini’s fascism ended up serving as an inspiration and guide for other authoritarian regimes, such as Nazism — Photo: GETTY IMAGES/via BBC

“From a military point of view, the march was a poorly planned operation”, explains the historian. “The 12,000 men of the Army’s 16th Infantry Division could have wiped out the fascists without much difficulty. The march was produced amid chaos and disorganization. (…) It was a poker game in which Mussolini did well. ”

One factor that favored the insurgents was the lack of coordination by the authorities. Except for a few exceptions, the security forces did not act against the rebels.

In 1919, Mussolini founded the group Fasci Italiani di Combattimento, an organization formed by veterans of the First World War.

The movement originally defended republicanism, the participation of workers in industrial management or the expropriation of religious organizations, but the bad results obtained at the polls caused them to change their position.

They adopted nationalism and began to exercise radical opposition to socialism, which made them gain supporters among business people, the army and the more conservative sectors of Italian society.

“Until mid-1922, Italy was on the brink of collapse as a result of the melting economy,” according to Lozano.

“In late July 1922, the socialist unions called a general strike to force the government to act against the fascists. Mussolini took the opportunity to demonstrate that the left posed a serious threat and that only fascism was capable of fighting it.” , adds the historian.

Mussolini achieved his goal of coming to power, but the fascists did not withdraw from Rome and ended up parading through the Italian capital to celebrate – Photo: GETTY IMAGES/via BBC

“Fascists took control of public transport and ensured that postal services continued to function,” according to Lozano. “If the strikers protested, they were brutally attacked. (…) Mussolini managed to present himself as the guarantor of law and order.”

“Italy was on the side of the victors, but it did not receive the additional territories expected from the allies and this made large sectors of society feel part of the defeated”, explains Larralde.

Fear, resignation or both?

As if that weren’t enough, Mussolini, upon taking over the government, also reneged on the democratic system in force in Italy.

“Fascism is not a meeting of politicians, but of warriors. (…) We are a combat formation that is consolidated through shooting, fire and destruction”, warned Mussolini in September 1922. Soon he would be known as ” Il Duce” (leader or warlord).

King Victor Manuel III’s refusal to declare a state of siege to stop Mussolini and the fascists ended up opening the door to the destruction of democracy and the Italian monarchy itself — Photo: GETTY IMAGES/via BBC

But, in this context, why didn’t the king declare a state of siege and turn to the army to stop Mussolini?

For Lozano, there may have been several reasons. “As the main politicians seemed to accept Mussolini entering the government, the king thought that resistance did not make much sense,” he explains.

The historian recalls that there were many fascism sympathizers in the Italian army, “which could not be trusted in the event of a crisis.” And finally, he adds that “the king may have feared that his cousin, the Duke of Aosta (Emanuel Felisberto), a fascism sympathizer, might be considered a candidate for the throne.”

The explanation that the monarch gave to the senators in 1945 was to “avoid bloodshed”, according to the Italian historian Emilio Gentile in his book E fu Subito Regime: Il Fascismo e la marcia su Roma (“And the regime emerged: fascism and March on Rome”.

The king stated that “the authorities ensured that the armed fascists who arrived in Rome were 100,000”, according to the historian. The monarch’s decision would not only lead to the end of Italy’s fragile democracy, but also of the very monarchy he intended to protect.

‘A movement that insists on not dying’

Giorgia Meloni’s victory in the September 25, 2022 Italian general election brought fascism back into the fray. Meloni is the leader of the Brothers of Italy party, originating from the restructuring of the Italian Social Movement of the National Right (MSI), created by former supporters of Mussolini.

But experts believe there is no cause for alarm.

“Meloni’s relationship with Mussolini is governed by nostalgia. (…) Despite the prevailing rhetoric about the return of the extreme right, there are no conditions for a return to the fascist dictatorship”, as Italian analyst Alberto Alemanno explained to BBC News Mundo. , professor of community law at the HEC School of Economic Studies in Paris, France.

“There are elements that indicate a rapid erosion of democratic infrastructure, similar to those that existed a century ago, when Nazi-fascism found fertile ground in Europe,” according to the professor.

“Today, there are many more checks and balances, inside and outside government, with a technologically empowered civil society that oversees governments.”

Lozano warns that fascism is an ideology that “insists on not dying” because “it has a strong attraction as an intermediate path between communism and capitalism, attracting voters who are disenchanted with traditional politicians.”

Previous One month before the call-up for the World Cup, see what Tite’s doubts are in the Selection | Brazilian Team
Next Tom Cruise blasts Marvel star Chris Hemsworth