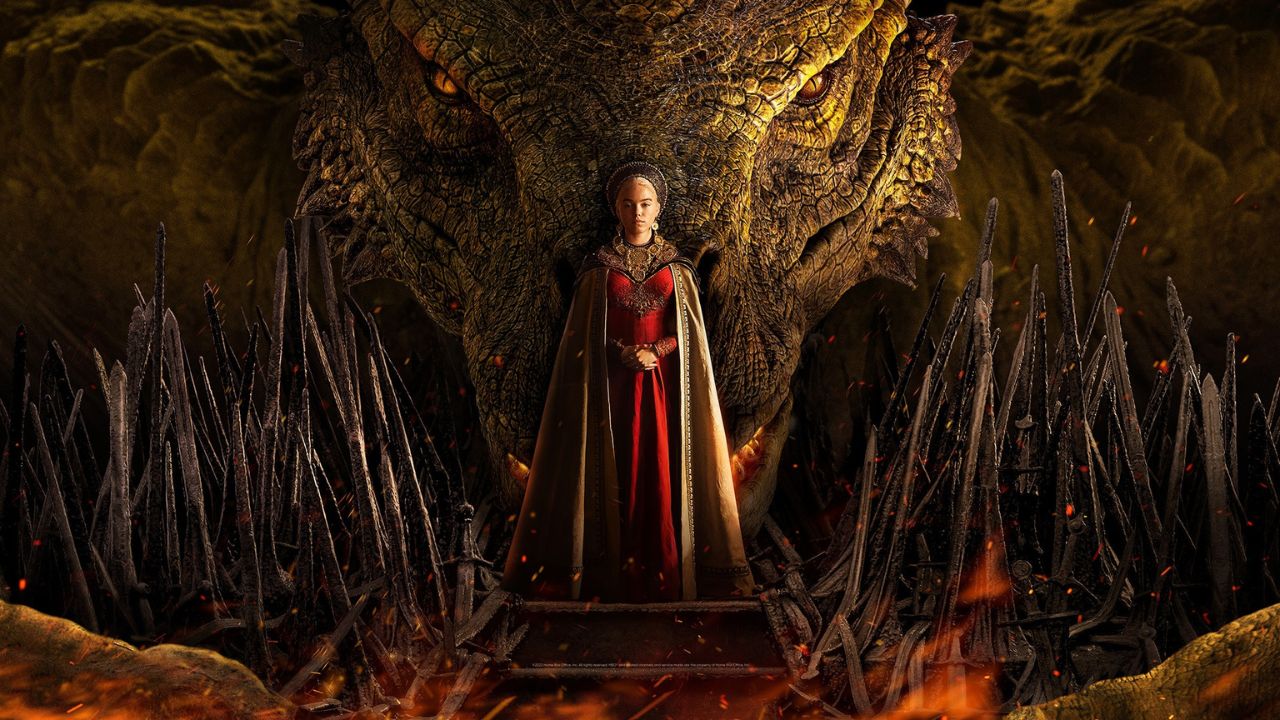 learn about the history of House Targaryen » Pop Series

based on the book Blood and Fire, the first of the collection A Song of Ice and Fire by author RR Martin, the series the house of the dragon tells the story of the ancestors of Daenerys Targaryen (played by Emilia Clarke) at the time when her ancestors were in power.

The Targaryens were an ordinary family from extinct Valyria, a faraway land where some 40 houses also held the power of dragons. The story takes a new turn when Daenys Targaryen predicts the doom of Valyria. She reports that a great catastrophe will wipe out the city due to the transgression of its people.

His father, then, decides to move with his entire family, his possessions and his 5 dragons (among them Balerion, the “dark terror”), to Dragonstone.

And it was on this island, near the Bay of Westeros, that they consolidated their power for 126 years.

The origin of House Targaryen

Aegon I always showed interest in the territory of Westeros that was dominated by the Andal kingdom. His objective was to unify them and become sovereign of these lands. Accompanied by his sisters and also wives, Rhaenys and Visenya, Aegon I arrives at Blackwater Torrent Coast, the three mounted on their dragons demonstrating all the military might they possessed.

The conquest lasted two years and extended throughout the territory. Some families, terrified of the dragons’ power, surrendered without objection and were rewarded with titles of protectors and lords of their lands. Houses that refused to surrender peacefully were fiercely defeated by the Targaryens.

After the city of Oldtown (seat of House Hightower) surrendered, the High Septon consecrated Aegon I as “king of the Andals, the Rhoynar and the First Men, Lord of the Seven Kingdoms and Protector of the realm.” This is considered Year Zero and marks the beginning of the Age of Dragons in Westeros.

Aegon I was responsible for creating the Red Keep and the much-desired Iron Throne with the swords of rival warriors killed in combat. Another important creation was the shield of house Targaryen, a three-headed dragon referencing Aegon I, Rhaenys and Visenya.

The only region that did not submit to the Targaryens was Dorne. Queen Nymeria took her house motto to heart: “Unsubdued, Not Bowed, Not Broken”. Remaining free for 100 years after the Targaryen rise.

After the reign of Aegon I, who died at age 66, fifteen other Targaryen kings succeeded him. Aenys I eldest son of the late king, faced many revolts from subjects and priests of the ancient faith, who did not accept his incestuous origin.

Only in the reign of Maegor I were revolts oppressed by violent methods. Another milestone was the completion of the construction of the Red Keep.

Maegor I’s death took place under mysterious circumstances, with his body found on the Iron Throne. A legend was created that the throne itself would have killed him to end the era of violence.

Jaeharys I (Jaeharys The Wise) replaced violence with wisdom and 50 years of peace and prosperity for the entire kingdom. The HBO series House of the Dragon begins at the end of Jaeharys I’s reign with his choice of successor.

Meet the main characters of the plot below:

Played by Paddy Considine, the grandson of Jaeharys I, ascends the throne and intends to maintain the legacy of peace and prosperity left by his grandfather.

In the book Viserys is young and becomes king at the age of 26, becoming known as The Young King, in the series he is represented at an older age when he ascends the throne. From his first marriage to Aemma (Sian Brooke), he was born Rhaenira (Milly Alcock/Emma D’arcy) her firstborn and only living child from that relationship.

The series shows that, without a male heir, King Viserys I appoints his daughter as the future Queen of Westeros, breaking a centuries-old protocol where no woman has ever been sovereign of the Seven Kingdoms.

However, in the book his love and preference for his daughter are explicit from the beginning, making it very clear his intention to name her to the throne.

Played by Milly Alcock in her youth phase and by Emma D’arcy in her adult phase. The eldest daughter of King Viserys I, she was named future queen at a very young age.

With a strong personality, the Dragon Rider Syrax doesn’t mind following social conventions. In her youth, she has a brief involvement with her uncle Daemon Targaryen (Matt Smith) and is forced to marry Laenor Velaryon (John MacMillan), son of Rhaenys Targaryen (Eve Best) and Corlys Velaryon (Steve Toussaint).

Their children – Jacaerys, Lucerys and Joffrey – are considered bastards because they lack the typical characteristics of Valyrian blood. She has two more children with her uncle and second husband: Aegon III and Viserys II.

Lived in the plot by Matt Smith, the younger brother of Viserys I believes he will be the natural heir to the Iron Throne, seeing his plans thwarted after the official appointment of Rhaenyra.

With a rebellious, vengeful and restless personality, the dragon rider caraxes will be one of the key pieces in the entire war to come. His first marriage failed and, in his second marriage to Lady Laena Velaryon, he had two daughters: Rhaena and Baela Targaryen.

After the death of the second wife, he marries Rhaenyra and has two more children.

Played in her youth by Emily Carey and as an adult by Olivia Cooke, the character is an essential piece in the war to come.

In the books, Alicent is ten years older than Rhaenyra and they don’t have the close relationship that is shown at the beginning of the series. The work also explores the rumor that Alicent had lost her virginity to Daemon Targaryen and that would be why Ser Otto Higtower hated him so much.

From her relationship with the king, Aegon II (Tom Glynn-Carney), Healena (Phia Saban) and Aemond (Ewan Mitchell) are born.

Played by Rhys Ifans, the character is an ambitious, intelligent and calculating man. He served as Hand of the King to three sovereigns, this being the second most important office in the court.

Otto Higtower always puts his personal interests first and all his decision making is partial and very well thought out.

The Dance of the Dragons

Two factions emerge in the war raging in the Targaryen family – and that’s the conflict that season one of the house of the dragon is focused.

The Greens, a reference to the Hightower Lighthouse, which glows green when it summons its vassals to war. They defend Alicent and her son’s right to the throne. Blacks, on the other hand, are followers of Rhaenyra as the rightful heir to the throne, as was her father’s wish.

Many battles and bloodshed mark the history of the Targaryen family, who will, over the years, lose their dragons and their power. Aerys II Targaryen, father of Rhaegar, Viserys, and Daenerys, will be the last ruler with Valyrian blood.

Known as the mad king, he dies at the hands of his royal guard Ser Jaime Lannister during Robert Baratheon’s rebellion.

The event is what initiates the plot of Game of Thrones.

The series is also based on A Song of Ice and Fire, book by George RR Martin, and ran for nine seasons on HBO.

In short, even with Robert Baratheon as king, after the death of the last Targaryen, other lords began to claim the right to the Iron Throne.

Brothers Viserys and Daenerys (Emilia Clarke) reappear. Initially it is Viserys who wants to regain the throne for her home, but after her death Daenerys becomes the new aspiring queen of Westeros.

In addition to the political threat with the emergence of various candidates for the post of king, an even more crucial battle looms: the living against the dead. There is an ancient prophecy that tells of the coming of the great winter and the long night, which will bring death and destruction.

The Lord of the Night, a nefarious creature whose origins are revealed at the end of the plot, sets out to destroy humanity and all it stands for.

Throughout the seasons, the Lord of the Night and his entourage of death are showing themselves to the public, increasing their army of dead and advancing towards the south of the territory.

Enemies fighting each other for the Iron Throne are forced to band together and work together because of the terrifying threat that looms. The battle is intense, with the death of dear and brave characters.

After the clash with the dead, attention turns to the struggle for dominance of Westeros, with countless losses and the total desolation of the capital and its population. The ending is surprising like the entire series and leads the audience to intense reflections on character, government and power.

Scenarios, characterization, setting, script and exquisite dialogues in all seasons. the saga of game of Thrones is even hoe one of HBO’s biggest hits.

Previous Oi opens job vacancies in Brazil
Next “She was going to have to…”; Marcos Rocha takes a wave and delivers the players’ ‘zoeira’ to Endrick for missed goals against Coritiba