Taiwan will treat China flights in airspace as ‘first strike’

Taiwan has warned it would treat any Chinese incursion into the island’s airspace as a “first strike” as Taipei seeks to prevent Beijing from increasing military pressure around the island.

Defense Minister Chiu Kuo-cheng told lawmakers in Taipei that the ministry was taking these incursions more seriously after a recent wave of closer flights by Chinese fighter jets and drones. Pressed on whether the violation of Taiwan’s airspace by any fighter jet would be seen as a first strike, Chiu said “yes”, without elaborating on what the answer would be.

“In the past, we said that we would not be the first to attack, which meant that we would not do that without them firing artillery shells or missiles, etc., first,” Chiu said on Wednesday. “But now the definition has obviously changed as China has used means like drones. Therefore, we have adjusted and will see any crossing of aircraft or vessels as a first strike.”

Taiwan is trying to reassert a buffer zone that China has eroded, particularly since House Speaker Nancy Pelosi’s visit to the island in August. Since then, an average of 10 Chinese military aircraft a day have crossed the median line dividing the Taiwan Strait or the southwest corner of the island’s largest air defense identification zone, according to data compiled by the Bloomberg. 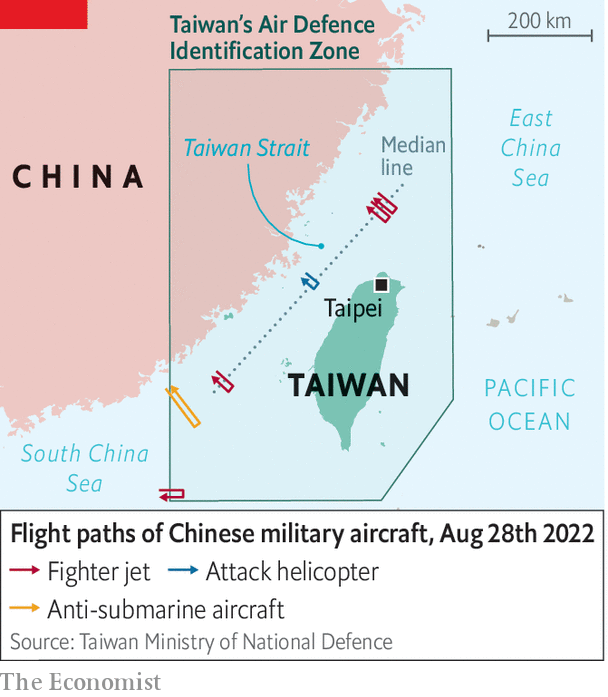 Chiu appeared to go further in response to a question from a lawmaker on Wednesday about recent drone flights over Taiwan-controlled islands off the Chinese coast. On September 1, Taiwan shot down a civilian drone near Kinmen Island after other attempts to repel it failed.

“First strike or not, as long as any Chinese aircraft or vessel crosses the line, we will destroy it,” Chiu said. “We have already made the adjustment.”

Taiwan is expected to be a central issue at the Communist Party of China’s twice-a-decade congress scheduled to begin on Oct. 16. Chinese President Xi Jinping is expected to secure a third term in power and may face increased pressure to bring Taiwan under Beijing’s rule as part of a long-term goal of national rejuvenation.

Chiu said on Wednesday that China’s activities had destroyed the concept of a median line, which the US drafted decades ago to avoid conflict between the two sides. Beijing said it did not recognize the midline and blamed Washington’s more vocal support for Taiwan for heightening tensions.

The Taiwanese military plans to continue to patrol and train east of the line, Chiu said. Still, Taiwan wanted to minimize the risk of an accident resulting in miscalculations, he added.

“We will do our best to avoid a small incident that could exacerbate the situation,” Chiu said. “But if China continues with repeated actions, we will show our will.”

Previous 5G: Anatel expands the coverage of the fifth generation internet signal in the country
Next overdose? Hideo Kojima reveals poster with actress Elle Fanning of his upcoming game