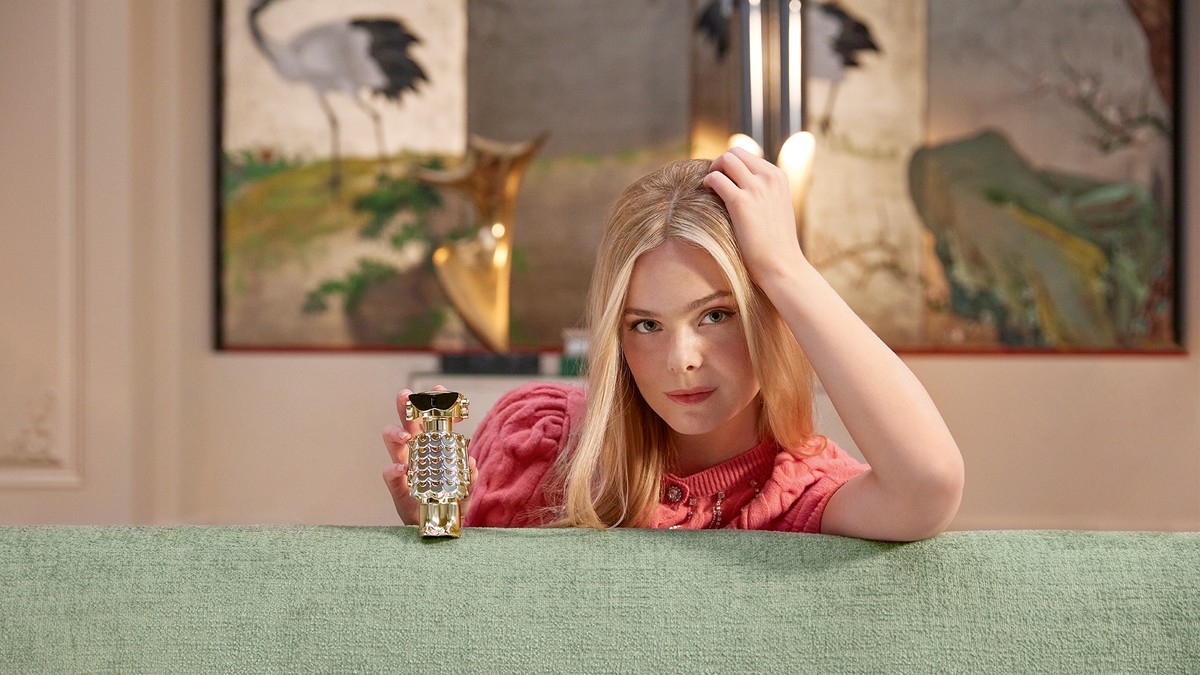 It is from this window that a kind of talisman emerges, a small toy art robot sporting a metallic dress and sunglasses, a figure that immediately attracts Elle Fanning on a Parisian night. To the sound of Fame, David Bowie’s hit, the American actress takes the bottle and takes it home to reveal its contents: Fame, a new women’s fragrance by Paco Rabanne. This is how the campaign for this launch unfolds, which marks a new chapter in the olfactory history (successful, with bestsellers such as One Million, Lady Million, Invictus and Olympéa) of the maison. ”It’s always so much fun filming in Paris! I loved being able to have my Parisian apartment for a day, where I take the robot, which starts flying around the house while I dance and try on different looks, embodying different characters”, tells us Elle Fanning, face of the perfume, during a conversation in your hotel suite in Paris. The good observer may recognize some allusions to emblematic scenes of movie muses (and Paco Rabanne), such as Jane Fonda, Barbarella, Audrey Hepburn, in “A Way for Two”, or Brigitte Bardot, in “Contempt”. Does she identify with these women? “They are true icons! And they had one thing in common: they were ahead of their time, always pushing boundaries and making themselves heard… That’s why they remain so relevant and current. Look at Jane Fonda and her activism, for example! It’s the same with Paco Rabanne, an iconic brand that has remained at the forefront, always reinventing itself without being held hostage to its old habits”, says the actress.

Despite being born almost in the 2000s (precisely in 1998), Elle Fanning drinks from the fountain of old Hollywood. “It is my great inspiration. I love looking at and collecting images of actresses from that time, and my looks, especially beauty ones, end up translating that. It’s an aesthetic that suits me!” she says, whose secret is not taking her appearance too seriously. “I follow trends, but I will never be a hostage. For me, both fashion and beauty are an expression of how you are feeling at that moment, they are a creative tool,” she adds. Accustomed to the world of perfumes, the actress confesses that her scent preferences have evolved over the years. “They’ve matured… I’ve gotten past the overly sugary, cotton candy-like perfumes, and these days I like to wear something that’s fresh and doesn’t overwhelm you. I prefer perfumes that reveal themselves and intrigue people when they approach those who take care of the place”. And what did she feel the first time she experienced Fame? “Honestly, I was super happy. It smells so good! It has this fresh, ethereal quality, with floral notes of jasmine that I love and a hint of sweetness from the mango. The eco-friendly commitment of composition is also very important to me.” The initial idea of ​​the perfumers, a strong team made up of the noses Dora Baghriche, Marie Salamagne, Alberto Morillas and Fabrice Pellegrin, was to create an incense cream, a material normally explored in niche perfumery. “We decided to take the incense out of the mystical and niche universe and turn it into something young, fun and uncomplicated”, explains Dora Baghriche.

Previous Biden warns of ‘Armageddon’ if Putin uses nuclear weapons
Next “Dispensation list”; Darling of the Nation in the era Jorge Jesus loses a lot of morale away from CRF and situation reaches Flamengo fans