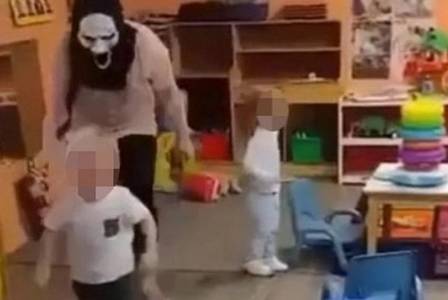 shocking images of terrified children being threatened by adults wearing “Death” masks, popular on Halloween went viral this week on social media. The scenes were recorded in Mississippi (USA).

in a video, terrified children can be seen crying while a person in the scary mask walks around the classroom, yelling at the kids. Action was a way of “punishment for misbehavior”.

At one point, she approaches one of the petrified children and asks “Are you being mean?”to which the child in tears responds “No” and shakes his head.

Telling the terrified child that “you better not be (bad)”it then moves to bully another child.

A statement posted on Lil’ Blessings Childcare and Learning Center’s official Facebook page said that four employees involved were fired and that the Mississippi State Department of Health was notified by the day care director.

Sheila Sanders, who has owned the daycare for 20 years, told the Monroe Journal that the first video was filmed last month and a second was taken last Tuesday (4/10).

Wtf is wrong with this bitch pic.twitter.com/3NxBKXicW3

However, she added, she was not aware of any of the videos until Wednesday afternoon (5/10). Sheila stated that the shocking behavior shown in the clip was completely unacceptable.

“The people who did these acts are no longer with us. They were fired. I wasn’t here and I didn’t know they were doing this. I don’t condone it and I never have.”she declared.

Although the parents described the actions of the day care workers as “horrible”most of them supported Sheila.