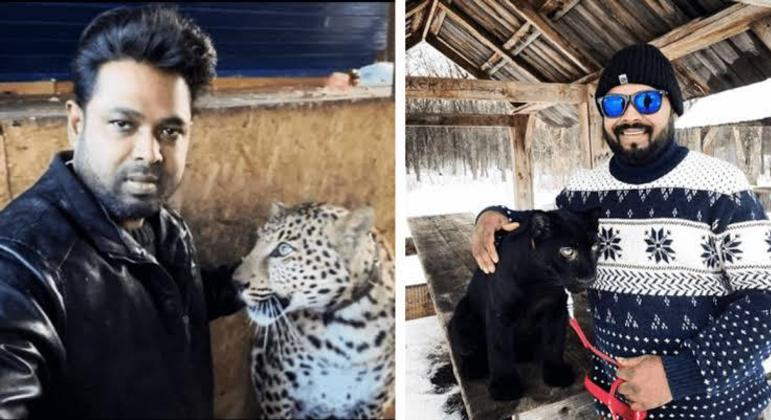 On Wednesday, 42-year-old doctor Gidikumar Patil appealed to the Indian government to try to rescue his two pets left in Ukraine: a jaguar and a panther.

Currently in Andhra Pradesh, India, the orthopedist was forced to leave the animals behind with a local farmer as he left Lugansk, a city in eastern Ukraine, the focus of the conflict between Moscow and Kiev troops.

Also known as Jaguar Kumar, a pun on the name Gidikumar, because of the unusual pets he owns, Patil says his priority is to save the lives of his “precious cats” — Yasha, a rare male pumapardo, leopard hybrid. and jaguar, and Sabrina, a female black panther.

As the Indian embassy in Kiev is unable to help with the rescue, the doctor said the message to the Indian government would be a way to try to resolve the “issue”.

“My humble message is for you to immediately consider and act quickly to resolve this issue with the best possible solution, in view of the exact current situation of cats and emphasizing their immediate safety,” Patil said, according to Indian newspaper The Hindu.

“My feeling of being away from my cats is very intense; sometimes depression, wistful memories of those good memories and apprehension about their well-being and fate in general.”

Patil acquired the two unusual pets from a zoo in the Ukrainian capital Kiev about two years ago and has been devoted to them ever since.

On his YouTube channel, with more than 62,000 subscribers, the doctor has in recent months broadcast updates on life alongside his pet big cats. He says his dream is to receive enough funding for a breeding project to help protect endangered species.

The videos also saved Patil from a Russian attack that took place when he left Lugansk, because through them it was possible to prove the orthopedist’s neutrality in the conflict.

For pet safety, Patil says he’s open to any solution any friendly country is willing to offer — whether it’s closer to the house he currently lives in, in western Ukraine, or somewhere in Europe or India.

“The main question is whether I can continue with authorized access to them, which is crucial as this is a really serious project. I’m not sure about the wildlife rules and legislation in India if they allow this kind of thing,” the doctor explained. “I am very hopeful that it will work, but first they must be moved with relative security by governments, with immediate and effective action.”

The doctor even says that the fundamental concept of creating these “remarkable cats” is to breed the “panther hybrids” through persistent breeding, until they reproduce the desired hybrid, perhaps the first of the species, which would then be bred and perpetuated in nature.

Previous an endless soap opera, check out latest news
Next Wonder Woman 3 gets an exciting update