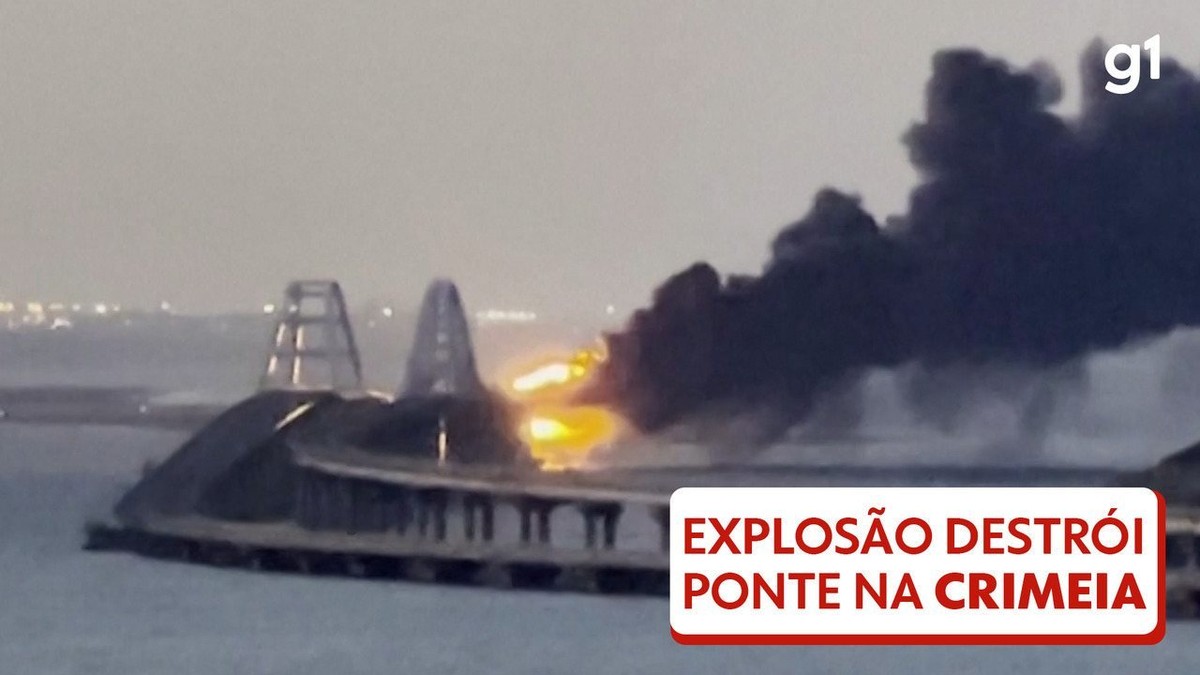 A major fire this Saturday (08) affected the only bridge that connects the Russian territory to the peninsula. Crimean Ukrainianillegally annexed by Moscow in 2014. The fire started after several violent explosions.

According to Russian authorities, a truck exploded and set fire to seven tanks on a freight train carrying fuel.

Russia’s National Anti-Terrorism Committee said the fire was caused by a bomb detonated in the truck. A section of the road part of the bridge would have collapsed. There was no damage to the arch over the navigable stretch.

On social media, Ukrainian journalist Oleksiy Soroki posted a video that would be from the moment of the explosion.

The road and rail bridge, built by order of President Vladimir Putin and opened in 2018, is the only road linking Crimea to Russia, and is currently used mainly to transport military equipment for the Russian armed forces in Russia. war against ukraine.

Ukrainian presidential adviser Mykhailo Podoliak said on Twitter that this would be “the beginning”. He made no direct connection to the Crimea bridge fire, but wrote: “Everything illegal must be destroyed, everything stolen must be returned to Ukraine, everything occupied by Russia must be expelled.”

Russia’s Foreign Ministry said on Saturday that Ukraine’s reaction to the explosion on the bridge linking Crimea to the mainland showed Kiev’s “terrorist nature”. “The reaction of the Kiev regime to the destruction of civilian infrastructure shows its terrorist nature,” ministry spokeswoman Maria Zakharova said on Telegram.

Putin ordered an official investigation into the cause of the fire.

The Kremlin had previously warned against bombing the 18-kilometer bridge and had threatened to respond to such an action with attacks on command centers in the Ukrainian capital Kiev.

A series of explosions also rocked the city of Kharkiv in eastern Ukraine on Saturday morning. The AP news agency reported huge plumes of smoke rising into the sky and a series of subsequent explosions.

According to the mayor of Kharkiv, Ihor Terekhov, missiles landed in the center of the city. The explosions sparked fires at a city medical center and a non-residential building. There is still no information on injuries.

About 200 graves and a mass grave were found in the town of Lyman in the eastern Donetsk region, which was recently recaptured by the Ukrainian army.

*With information from AFP, Reuters and AP

Previous WhatsApp: You can now use THIS new security setting; users are excited
Next Neymar is surpassed by eight Brazilians and a complete team of Englishmen in the top 100 of the most valuable in the world