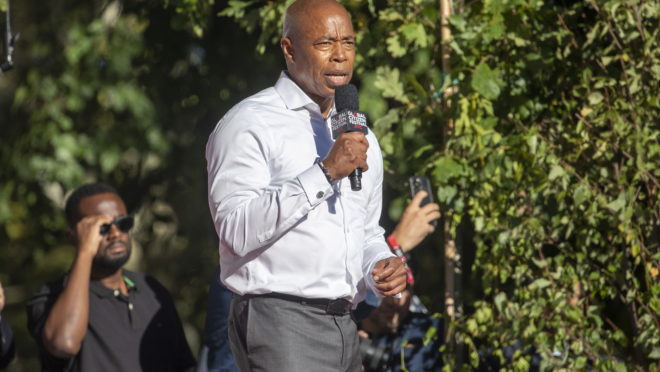 New York Mayor Eric Adams on Friday declared a state of emergency in the city to respond to the arrival of thousands of immigrants and asylum seekers in recent months, many sent on buses by Texas state officials.

Adams explained that the city expects to spend at least $1 billion this year to help these people and that the shelter system is practically full, which is why it has asked the federal and state governments for help moving immigrants to other locations.

According to the mayor, since April more than 17,000 asylum seekers, most of them South Americans, have been sent by bus to New York from the southern border of the United States.

Adams detailed that, on average, five or six buses have been seen a day since September, with nine arriving on Thursday. Four more arrived on Friday, according to the New York Post.

“Thousands of asylum seekers were transported to New York and simply abandoned here, without notice, coordination or attention, and more continue to arrive every day,” Adams accused, referring to migrant shipments organized by the governor of Texas, Gregg Abbott, and other southern officials.

“This is a humanitarian crisis that began with violence and instability in South America and is being accelerated by US political dynamics,” added the Democratic mayor.

Abbott and other Republican governors have taken to using this tactic of sending immigrants to New York, Washington and other Democratic-run cities to spread the immigration burden and protest President Joe Biden’s policies.

New York is one of the few cities in the United States that is required by law to house anyone and not leave anyone on the street, but the arrival of thousands of immigrants has put the system to the test.

According to Adams, there are currently more than 61,000 people in the city’s shelter system, of which nearly 20,000 are children and one in five is an asylum seeker.

“Our shelter system is running at close to 100% capacity, and if these trends continue, we’ll have over 100,000 people next year. That’s far more than the system was designed to handle. It’s unsustainable. city ​​will run out of resources for other priorities”, he warned.

The mayor assured that New York is committed to doing everything in its power to support these people, for example, finding hotel accommodation or permanent housing, but insisted that resources are running out.

With the declaration of a state of emergency, Adams explained that all municipal agencies will have to coordinate the construction of emergency housing and that certain land use regulations will be lifted to facilitate this process.

The city is already in the process of setting up camps to house migrants on an island opposite Manhattan and expects them to be operational in the coming weeks to receive hundreds of people, although it will only be temporary accommodation for a few days, which is why the tents are not available. solve the problem.

In addition, Adams said on Friday that a bill will soon be announced for New York homes to receive asylum seekers or homeless people because many citizens “want to help.”

Previous Virus STEALS credit card data: learn how to PROTECT YOURSELF!
Next Family will grow! Júlio Rocha announces that he will be a father for the third time