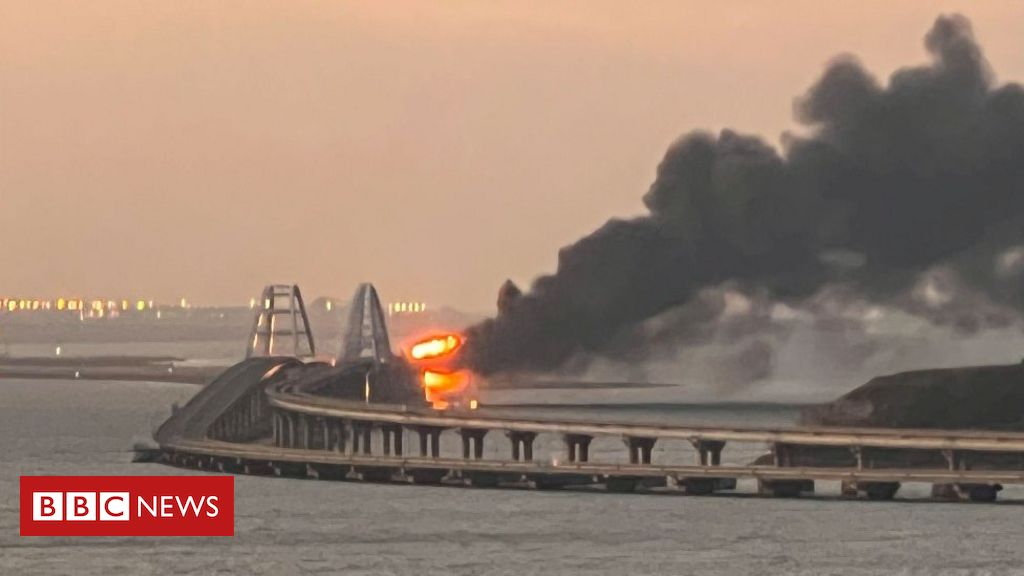 The explosion, this Saturday (8/10), of part of a bridge built by Russia to link its territory with the Crimean peninsula – illegally occupied by the international community in 2014 – further tensions the new phase of the war in Ukraine. .

It is still unclear what caused the Kerch Bridge incident, but it caused fuel tanks on the tracks to explode and led to the collapse of a section of the structure.

The bridge, built by order of Russian President Vladimir Putin, is crucial for transporting Russian military equipment to its troops in Ukraine. Putin ordered an investigation into the blast, according to a Kremlin spokesman. And pro-Russian officials in Crimea said restoration work on the bridge could begin as early as Saturday.

The dramatic images of the burning bridge are a shameful symbol for Moscow, explains BBC Russia editor Steve Rosenberg. He explains that because of this, pro-Kremlin commentators are already urging the Russian government to react strongly against Kiev.

It is still unclear how Putin will respond, but the Russian president has already been escalating the war by calling in reservists, annexing four Ukrainian territories and threatening to use his nuclear arsenal.

In the region of Zaporizhzhia, also annexed by the Russians, a missile attack caused commotion on Thursday that left at least 17 civilians dead – the local population thinks they are being punished by Russian troops because of Ukrainian advances on some fronts. And they fear that more attacks on civilians could occur in the coming days.

The Kerch Bridge is not only strategically important, but also a symbol of the annexation of Crimea – a way of showing that the two territories are permanently united, explains Steve Rosenberg.

When the bridge was inaugurated in 2018, the Russian state press hailed the work as “the construction of the century”, as it is the longest bridge in Europe, at 19 km in length.

On several occasions, Russian officials stated that the bridge was well protected from threats, whether by air, land or water.

At the same time, Russia also lost Ukrainian territory it had conquered, which could also provoke reactions from the Kremlin.

The Ukrainian government, meanwhile, celebrated the act against the bridge, although it did not directly claim the action. An adviser to Zelensky, Mykhailo Podolyak, said the episode was “just the beginning”.

“Crimea, the bridge, the beginning. Everything illegal must be destroyed, everything stolen must be returned to Ukraine, the entire Russian occupation must be expelled,” Podolyak tweeted.

The only link between Russia and Crimea, the bridge plays a vital role in Russian supplies, explains BBC Ukraine correspondent Paul Adams. Without that link, Moscow will struggle to send troops and equipment to repel the Ukrainian offensive in northern Kherson – one of the Ukrainian areas Russia annexed.

Lawrence Freedman, a retired professor of war studies at King’s College London, told the BBC that Russian troops will face major challenges while the bridge is disabled.

“The Ukrainians did not just target (Russian) territory and individuals, but attacked logistics. (…) The Kerch Bridge is an example that they (Russians) have a resupply problem. well-armed and fighting points, they won’t be able to go forward if they don’t get supplies,” Freedman told BBC Radio 4.

Hugo Bachega, the BBC’s Ukraine correspondent, explains that Kiev has seen an important momentum in the war, reconquering significant amounts of territory in its counter-offensive and forcing Russian troops to abandon positions they had held for months.

The Kerch Bridge, he explains, is particularly hated by Ukrainians because it symbolizes the occupation that has been going on for eight years.

According to the Russian Anti-Terrorism Committee, the fire on the bridge started at 6 am (local time) on Saturday, in a truck. Afterwards, the flames spread to fuel tanks and the tracks of the railway part of the bridge.

Road and rail traffic on the bridge was suspended, causing long lines in the area.

Pro-Kremlin officials in Crimea have said they will organize a ferry route between the territory and Russia and are trying to reassure local people that the peninsula is not at risk of a shortage of goods.

“We have fuel for a whole month, and there should be no increase in prices,” Sergei Aksyonov, head of the Crimean government, said in a statement. “We have two months’ worth of food. There is no risk.”

Vladimir Kontantinov, president of Crimea’s parliament, said the explosion on the bridge was the work of “Ukrainian vandals”.

“In the 23 years that they (Ukrainians) were in charge (of the peninsula), they didn’t build anything important in Crimea, but they managed to damage the Russian bridge. That is the essence of the Kiev regime and the Ukrainian state. they do,” he wrote on Telegram, adding that the damage “will be promptly restored as it is not serious”.

A former British Army expert told the BBC’s Paul Adams that the damage to the bridge appears to have been “a masterpiece of clandestine sabotage”.

On condition of anonymity, he said the action may have been carried out by Ukrainian special forces.

“A well-planned attack from below (the water) up seems to have been the cause,” he declared.

Previous yet another app that surrendered to the TikTok style; understand!
Next Hideo Kojima shows Elle Fanning behind the scenes of his next game