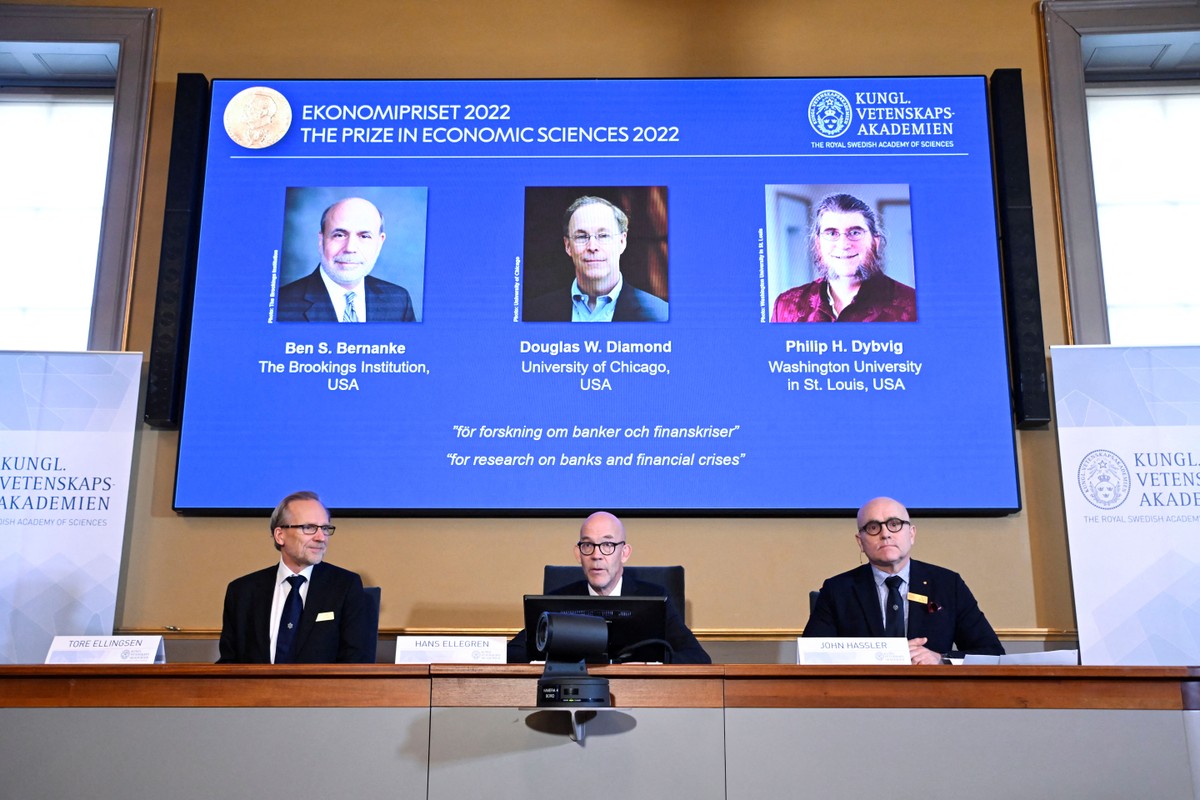 The Americans Ben S. Bernanke, Douglas W. Diamond and Philip H. Dybvig were awarded this Monday (10) with the Nobel Prize in Economics 2022.

The researchers were awarded for their studies on banks and financial crises.

They have developed theoretical models that explain why banks exist, how their role in society makes them vulnerable to rumors about their impending collapse, and how society can lessen that vulnerability.

“The work for which Ben Bernanke, Douglas Diamond and Philip Dybvig are being recognized has been crucial for subsequent research that has improved our understanding of banking, banking regulation, banking crises and how financial crises should be managed,” said the Royal Academy of Sciences at Sweden.

In addition, the award recognized the three economists for significantly improving understanding of the role of banks, particularly during financial crises, as well as how to regulate financial markets and why preventing bank failures is vital to the economy.

The researchers will receive the award of 10 million Swedish kronor, divided evenly by the three.

The winners of the 2022 Nobel Prize in Economics — Photo: Reproduction

How banks affect the economy

Using historical sources and statistical methods, Bernanke’s analysis showed which factors were important in the fall in Gross Domestic Product (GDP). He found that factors directly linked to banks that went bankrupt were responsible for most of the crisis.

Ben Bernanke also analyzed the Great Depression of the 1930s, the worst economic crisis in modern history, and showed how bank runs were a decisive factor in making the crisis so deep and prolonged.

“The research presented by this year’s laureates reduces the risk of financial crises turning into long-term depressions with serious consequences for society, which is of the greatest benefit to all of us,” the award organization said.

According to the Royal Swedish Academy of Sciences, Diamond showed how banks play a socially important role. As intermediaries between savers and borrowers, banks are best suited to assess the creditworthiness of borrowers and ensure that loans are used for good investments.

Diamond and Dybvig also presented a solution to the banking vulnerability, in the form of government deposit insurance. When depositors know that the state has guaranteed their money, they no longer have to run to the bank as soon as rumors of a bank run begin.

Findings have improved the way to deal with financial crises

The research by Ben Bernanke, Douglas Diamond and Philip Dybvig began in the early 1980s to shed light on why banks exist, how to make them less vulnerable to crises, and how bank meltdowns exacerbate those financial crises.

For the economy to function, savings must be channeled into investments. However, savers want instant access to their money in case of unexpected spending, while businesses and homeowners need to know they won’t be forced to repay their loans.

Diamond and Dybvig show how banks offer a solution to this problem. Acting as intermediaries that accept deposits from many savers, banks can allow depositors to access their money whenever they want, while offering long-term loans to borrowers.

However, the analysis also showed how this makes banks vulnerable to rumors about their impending collapse. If a large number of savers simultaneously rush to the bank to withdraw their money, the rumor can become a self-fulfilling prophecy – a bank run occurs and the bank collapses.

According to them, these dynamics can be avoided if the government provides deposit insurance and acts as a lender of last resort for banks.

Diamond demonstrated how banks perform another socially important role. As intermediaries between many savers and borrowers, banks are best suited to assess borrowers’ creditworthiness and ensure that loans are used for good investments.

Ben Bernanke analyzed the Great Depression of the 1930s, the worst economic crisis in modern history. Among other things, he showed how the bank runs were a decisive factor in making the crisis so deep and protracted.

When banks collapsed, valuable information about borrowers was lost and could not be recreated quickly. Society’s ability to channel savings into productive investments was thus severely diminished.

“The laureates’ insights have improved our ability to avert serious crises and costly bailouts,” said Tore Ellingsen, Chair of the Prize Committee in Economic Sciences.

This year’s other Nobel Prize winners were:

Older winners and only two women

So far, only two women have won the award. In 2019, the prize was awarded to a trio of researchers specializing in the fight against poverty, the Americans Abhijit Banerjee and Michael Kremer and the French-American Esther Duflo, the second woman distinguished in the discipline and the youngest laureate in the history of this award at the time. aged 46.

The first woman to win the Nobel Prize in Economics was American Ellinor Ostrom in 2009. (see list of recent winners below).

Economics has so far been the Nobel Prize where the profile of the future winner is the easiest to guess: a man over 55 years of American nationality.

In the last 20 years, three-quarters of them fit this description. The average age of the winners is also over 65, the highest among the six awards.

The economics prize, officially called the “Bank of Sweden Prize in Economic Sciences in memory of Alfred Nobel”, was created in 1968 and first awarded in 1969.

The honor was not part of the original group of five awards established by the will of Swedish industrialist Alfred Nobel, creator of dynamite. The other Nobel Prizes (Medicine, Physics, Chemistry, Literature and Peace) were first awarded in 1901.

The Nobel Prize in Economics is the last awarded this year. The Medicine, Physics, Chemistry, Literature and Peace awards have already been announced in recent days.

Although it is the most prestigious award for a researcher in economics, the award has not acquired the same status as the disciplines chosen by Alfred Nobel in his founding will (Medicine, Physics, Chemistry, Peace and Literature) – his detractors scoff at him as a ” fake Nobel” representing orthodox and liberal economists.

Previous Lisca denies pressure at Avaí, but says he is sad with a negative sequence and lack of results | Hawaii
Next “See with good eyes”; Palmeiras is taken by surprise and Scarpa’s ‘partner’ also signals to leave Verdão