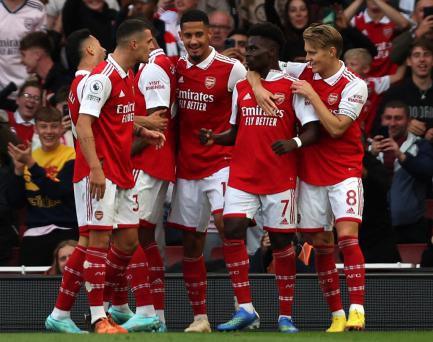 Brazilians shine, Arsenal beats Liverpool and remains in the lead of the Premier League

Arsenal won a great 3-2 victory over Liverpool and remains at the top of the Premier League. In the first half, Martinelli scored a goal with one minute of play, Darwin Núñez equalized the duel, but Saka gave the Gunners an advantage. In the second half, Firmino left everything the same again, but the author of the 2nd goal gave the victory to the London team converting a penalty suffered by Jesus.

QUICK GOAL
In the first minute of the game, Gabriel Martinelli received a deep pass from Odegaard in the area and hit first to open the scoring for Arsenal. At 25, Liverpool responded with Darwin Núñez being triggered by the right side of the area and dropping a bomb for Ramsdale’s good defense.

IT MAKES A DIFFERENCE
In the 33rd minute, Gabriel Magalhães failed to try to cut a throw from Arnold, Díaz took advantage of the ball and played for Darwin Núñez to finish and tie the match. In the last play of the first half, Martinelli took the ball from midfield to the Reds’ area, cleared the mark and crossed low for Saka to stretch his leg and score the Gunners’ 2nd.

HOT RESTART
On the second half, Arsenal almost extended the score after Martinelli found Odegaard on the edge of the area, but the midfielder finished on top of Alisson. Liverpool responded in the seventh minute with Firmino receiving a deep pass from the left side of the area and hitting a cross to tie the match.

WHAT PRESSURE
In the 27th minute, Saka took advantage of a cross from the left, cleared the mark and kicked for Alisson’s defense, who made another great save after a rebound by Gabriel Jesus. Next, the Gunners’ number nine suffered a penalty committed by Thiago and Saka converted the charge and put the London team in the lead again.

Previous Galaxy S22 Plus with water protection and amazing price at KaBum!
Next WhatsApp: 6 functions that are in testing and may soon arrive in the app | apps