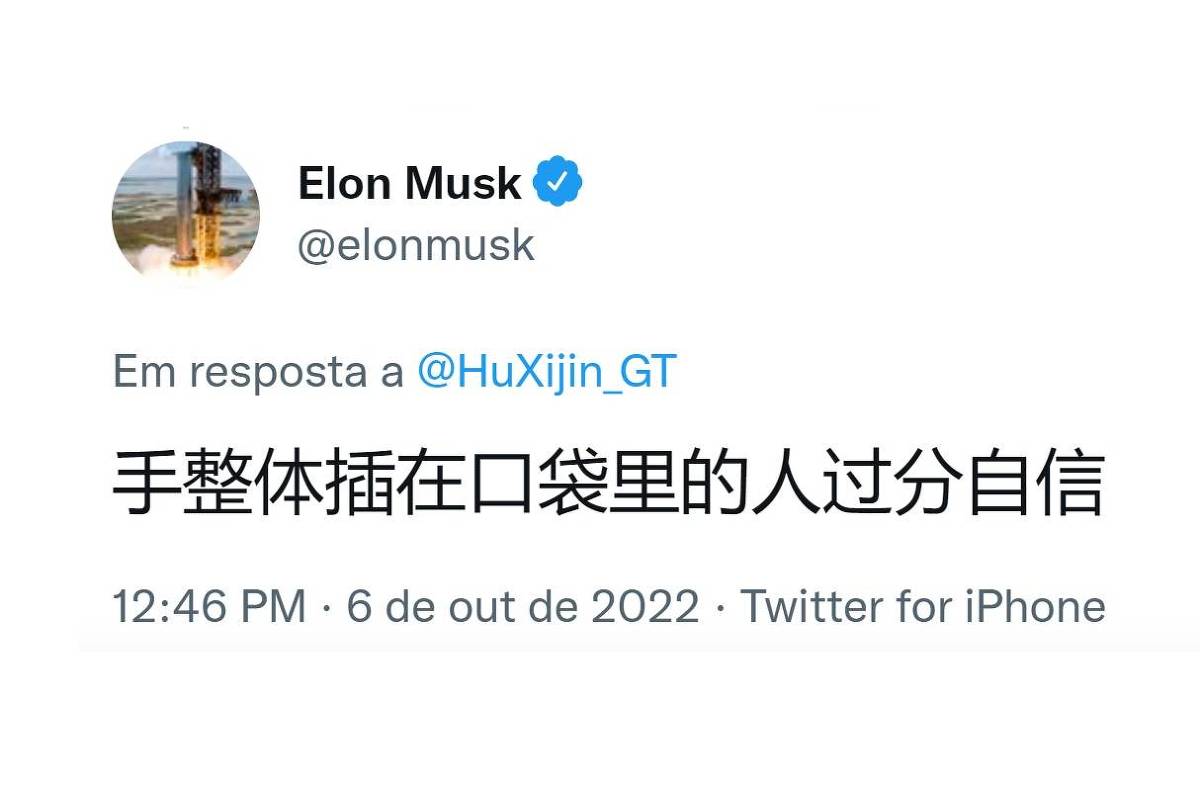 At the beginning of the week, Elon Musk tweeted a controversial peace proposal in Ukraine, including Crimea as part of Russia and a new UN plebiscite in the annexed regions. Justified by the risk of “nuclear war”.

Kiev refused with profanity, Moscow praised. AND Hu Xijina columnist and former editor of the Chinese Global Times, joked via Twitter that Musk “got too loose”, for “believing too much in US ‘free speech'”, and would “learn a lesson”.

Musk then replied in Chinese, with a saying attributed to Confucius, to question Hu for only criticizing, without acting in the face of the atomic threat: “A man with his hands in his pockets feels arrogant all day”:

And he launched a new proposal, with even greater repercussion, for Taiwan, via the Financial Times: “My recommendation would be to find a special administrative zone for Taiwan that is reasonably palatable, a milder agreement than Hong Kong.”

Justified by the projection of a 30% drop in the world economy, in case of occupation by China.

Hu this time praised, “you really are one of the few in the West who have courage to speak“, just like Global Times and Bloomberg, citing the Chinese government, “island could exercise a high degree of autonomy”.

The Taiwanese press also covered widely, with the Lianhe Bao or United Daily News more newsworthy, underlining Beijing’s new stance, and the Ziyou Shibao or Liberty Times, closer to the Taipei government, with an article in which Musk is called “arrogant ” and “crazy”.

Saturday afternoon (8), Bloomberg’s headline in the US was already that “Russia rushes to reopen the Crimea bridge”, which, in fact, happened “few hours after” the attack. The headlines in the New York Times and Washington Post then turned to the “symbolic value” of the images and the fact that train and car traffic had returned, but not truck traffic.

Some Westerners, like the British ITV, gave the images of the traffic returning to the bridge, “few hours after” the explosion scenes.

Kiev did not claim the attack on the bridge, but the NYT reported, citing an anonymous source, that “Ukraine is behind the attack” and “orchestrated the explosion, using a bomb”.

Kiev also did not accept the attack that killed Russian journalist Daria Dugina in August, but the NYT released on Thursday (6) that, according to the US government, “parts of the Ukrainian government authorized the car bomb attack near Moscow”. And “the US didn’t know.”

Via RT, the Kremlin spokesman reacted immediately, saying the leak to the newspaper appeared to be for the White House to “distance itself from future attacks” by Ukrainians in Russia.

On Bloomberg TV (above), Columbia University economist Jeffrey Sachs questioned the US role in the Nord Stream pipeline attack and American coverage of the war:

“I know it goes against our narrative, you’re not allowed to say these things in the West, but the fact is that all over the world, when I talk to people, they think the US did that. say, but it doesn’t show up.”