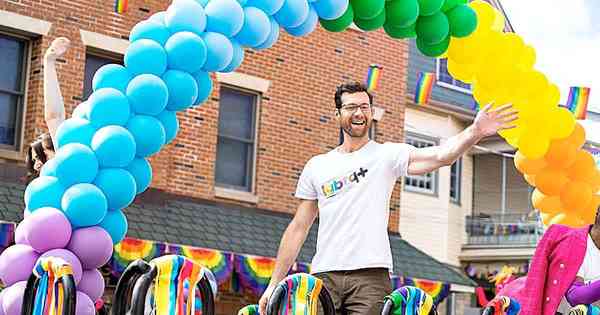 Romantic comedies are formative for many people. Statements, wedding parties, and passionate words from movies often inspire real-life couples. For those LGBTQIA+, however, the collection of references is quite scarce.

That’s why “More than friends, friends”, showing in cinemas in BH, has been treated with fanfare not only by its studio, but also by the public and the media. It even won a special screening at the Toronto Film Festival in Canada as the first major romantic comedy about two men.

“The label is important, we shouldn’t be shy about it. We’ve had a lot of heterosexual films that made us laugh and cry, true, but never anything like that,” says Billy Eichner, the film’s protagonist, screenwriter and producer.

“One thing I have in common with my character is that I’m openly gay. I was out of the closet very early in my career, but it took Hollywood a long time to celebrate it, to find it cool. Now is my opportunity to show not only how fun, but also how complicated and multidimensional LGBTQIA characters can be.”

It is not exactly true, however, that “More Than Friends” is the first major-studio homosexual romantic comedy. This year, Searchlight Pictures released “Fire Island: Pride and Seduction” and, last year, Sony’s TriStar Pictures bankrolled “Any Warning?”, a lesbian Christmas movie starring Kristen Stewart.

Marketing around the idea of ​​being first took a bad turn on social media, which Eichner has already resorted to to explain himself. “More than friends” is not a tragedy or an independent production, where the vanguard of sexual and gender diversity is – he says now. Its scale and the attention that Universal has given the film are what sustain the originality.

“Fire island” and “Somebody warns?”, in fact, did not receive the same prestige in their releases and went straight to streaming. “More than friends”, therefore, is on a mission to prove the appeal of his gay romance in the difficult post-COVID box office.

Billy Eichner plays Bobby Lieber, a podcast host who thinks he’s immune to passion. He’s torn between recording the show, writing queer children’s books and looking for men to have sex with on Grindr, a hookup app that tests his patience with constant requests for intimate photos. He eventually relents, but slashes his butt with the razor blade as he prepares her for the photo shoot.

Life begins to take on greater purpose when he is invited to coordinate what would become the first museum of LGBTQIA history in the United States, in New York. Bobby meets Aaron, an equally commitment-averse guy, with whom he feels an instant connection.

The role of Luke Macfarlane, strong that, unlike Eichner, had more difficulty coming to terms with homosexuality, having to hear from agents and colleagues that he would never star in a film of action if he came out of the closet. He didn’t mind, but he’s still waiting for the paper.

If he hadn’t come out, Macfarlane would have passed away from “More than friends”. The film decided to cast LGBTQIA actors – and not just queer roles. Here, they also give life to heterosexual characters, in a kind of subversion for which Eichner made a point of fighting.

It was a message-laden decision in the midst of endless discussions that swarm the internet whenever a straight man is chosen for a gay role, as was the case with Michael Cimino in the series “Love, Victor”, or with Harry Styles, who doesn’t want to label, in the movie “My policeman”.

Nicholas Stoller, director of “More Than Friends”, interestingly, was one of the few heterosexuals on the set. But Eichner wanted him for his experience in sitcoms like “Love Hangover” and “Five Years of Engagement”. The filmmaker says that he took it upon himself to develop the film collaboratively, listening to personal stories and opinions from those around him.

“When it comes to humor, you always need to look for something new. It is only natural, then, that the genre today moves towards new types of characters. a natural movement that excites me. I was intrigued to be a fan of romantic comedy and have never seen a gay man on the big screen,” she says.

The fact that Stoller is not gay, by the way, helps to break with the idea that “More Than Friends” is a niche plot that only homosexuals will want to see. It is true that the film is full of references that only LGBTQIA people will understand – from theater musicals to pop divas, from sex clubs, it is very present.

But the director says there are jokes for everyone and the more specific a story is, the more universal its main themes become.

“The idea of ​​a niche is in the eye of the beholder. Why are my references as a gay man niche and not those of a straight man?” asks Billy Eichner. “For me, the Super Bowl, then, is niche. That the viewer finds these specifics strange can be a good thing. It’s a different romantic comedy, but the emotions are the same.” (Leonardo Sanchez/Folhapress)

“More than friends, friends” until now considered a box office failure. Universal Pictures invested $22 million in the film, which grossed less than $5 million in US theaters in its opening weekend, despite positive reviews.

The production ranked fourth in the United States, behind Paramount’s horror “Sorria” and two other films that premiered in September.

Shown in about 3,000 theaters, straight people just didn’t show up, said protagonist and producer Billy Eichner, in explaining the failure.

“This is the world we live in, unfortunately. Even with great criticism, heterosexuals, especially in some regions of the country, did not go to see ‘Bros’, he tweeted, referring to the film’s original English title. “ disappointing but what .”

Director Nicholas Stoller hoped the film would stand out at the box office to show studios that there is a “large audience” for this type of story. “Not just an LGBTQIA audience, but a heterosexual audience as well.”

Eichner revealed that he attended an exhibition in Los Angeles, and the audience’s response was “totally magical.” However, it revealed problems, such as the chain of cinemas that threatened not to show the film “for gay content”. (AFP)