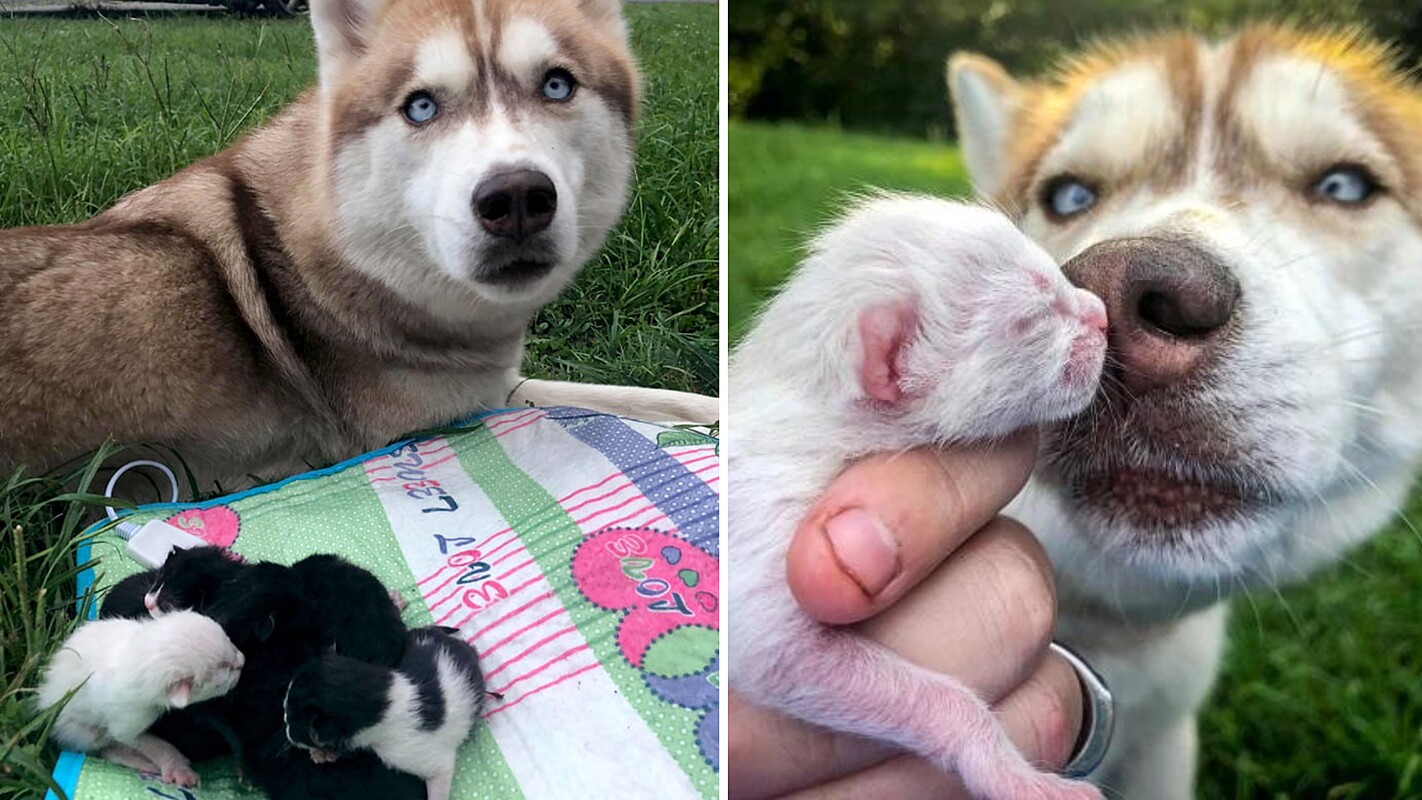 A three-year-old husky named Banner won the hearts of netizens with all her kindness by adopting seven kittens she found while walking through the woods inside a cardboard box in July 2018.

Banner lives with his guardian Whitney Braley in Georgia, United States. The two have been together since the canine was a puppy.

Trained to help her owner who suffers from anxiety in different tasks and situations, the husky has always shown a big heart to help anyone in need, including other animals.

“We do a lot of rescues and she is always attached to the kittens. Two years ago I had my first bottle-fed kitten that was found in a ditch, and Banner raised her. This particular cat still lives with us, but she has raised at least ten different litters of kittens over the years,” she adds.

Like Banner, the woman is also a great animal lover and together they often carry out some rescues on their own.

That’s how they found the seven newborn puppies inside a cardboard box, on one of their walks through the forest.

Upon finding the box, the husky immediately alerted her owner and took her to the place so she could open it, since it was closed.

Arriving there, Whitney took them out of the box one by one and luckily everyone was still alive.

“Someone must have put them in a cardboard box, closed the lid tightly and left them there to die. They probably thought no one would ever discover them. I don’t even know how Banner knew they were there. The kittens froze and didn’t meow or anything.”

Since the rescue, Banner had decided that the puppies would now be his. The dog has a personality to be extremely loving and docile, in this way, she became a great adoptive mother.

“It makes me sick that someone could do this to these innocent little animals. It’s so cruel and heartless,” she recalls.

Seeing all the love her dog had for the puppies, Whitney decided to take care of them until she found a new home for each one.

“I will find suitable homes for the kittens who will love them forever. Our local shelter usually slaughters in three days, so it’s best if I take care of them myself. That’s why I always end up taking care of babies. I don’t want them to die,” she stresses.

And of course, in this mission, Banner was by the tutor’s side to give all the love and affection necessary until the puppies knew how to take care of themselves.

On his Instagram page (@bannerthesuperdog) it is possible to learn a little more about Banner’s personality and his affection for other animals, as is the case of a video where Banner receives good licks from the family cat.

According to the Petz website, as the name implies, its origin comes from Siberia, during prehistory. The breed was commonly used for pulling sleds and hunting.

Due to sled competitions, Huskys began to expand around the world and in 1909, these dogs arrived in Canada to compete in long competitions.

In the 1990s, this was when this animal began to be seen as a form of companionship, especially in North America.

Currently, it is in the icy regions that dogs of this breed inhabit the most.

Previous It’s dangerous? See When to Be Careful When Using Your Cell Phone While Charging | Piauí
Next Jungle Cruise | Producer is confident with sequel