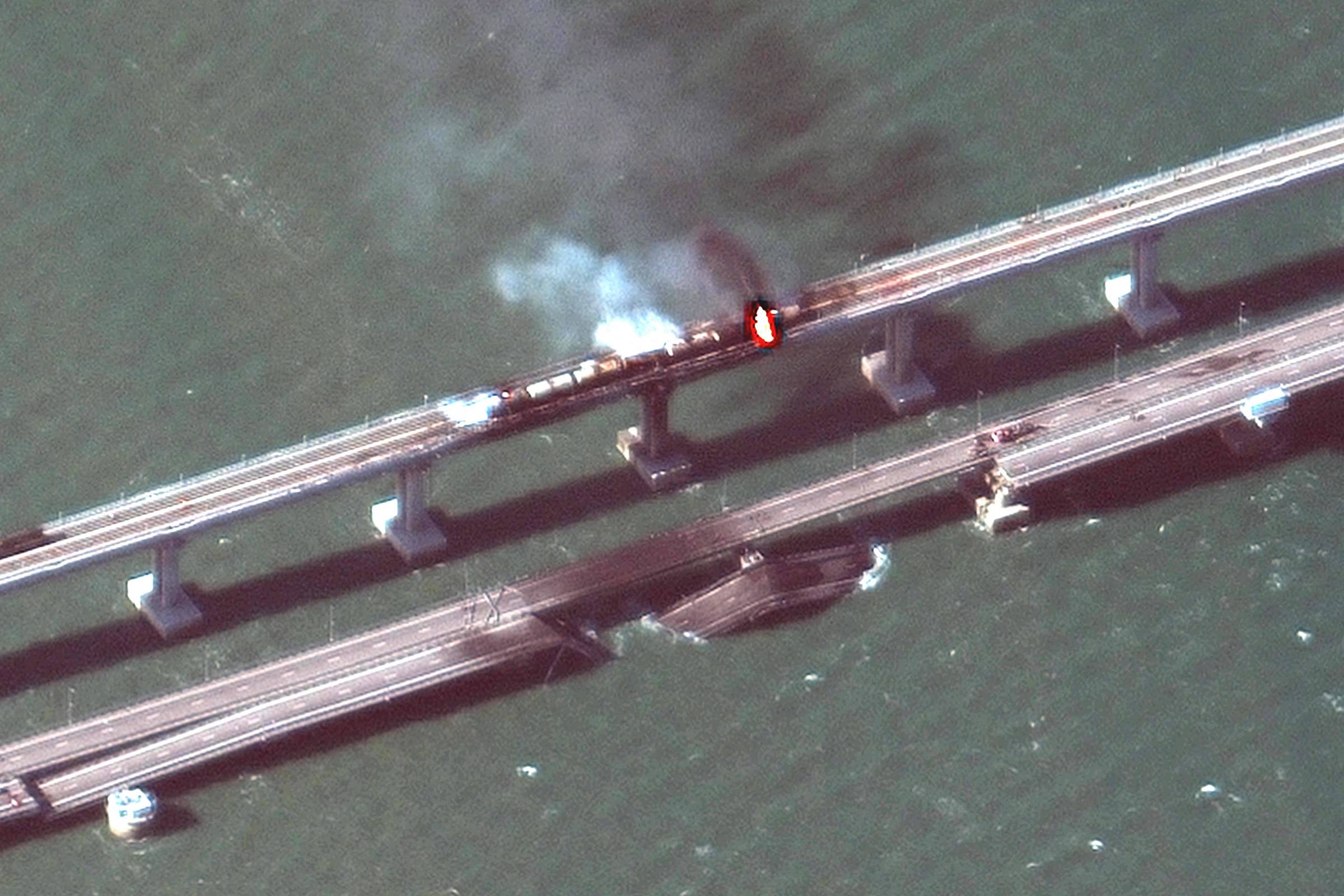 Russia’s Investigative Committee, the body that deals with serious crimes in the country, said on Sunday in a preliminary report that the explosion on the bridge over the Kerch Strait was prepared by Ukraine’s secret service. The structure links Russian territory to the Crimean peninsula, annexed in 2014.

President Vladimir Putin called the episode a terrorist act. “The authors, performers and sponsors [da ação] they are the Ukrainian secret service,” the politician said in a meeting with Alexander Bastrikin, head of the committee. “There is no doubt. This is a terrorist attack aimed at destroying critically important civilian structures in Russia.”

According to the RIA agency, the head of the investigative body announced that he will open a criminal case on the charge of terrorism. According to him, the suspects involved in the preparation of the explosion have already been identified by agents of the FSB (Federal Security Service, one of the successors of the KGB).

While there is still speculation about the origin of the explosion, with experts citing the possibility that it was the work of some sort of unmanned craft, Russia is working on the official hypothesis of a truck bomb. Bastrikin told Putin that the vehicle traveled through Bulgaria, Georgia and Armenia, in addition to the Russian territories of North Ossetia and Krasnodar – the latter was where the vehicle’s owner lived.

The case took place on Saturday morning (8) and was considered symbolic of Moscow’s negative moment in the war, after a series of setbacks – the structure is seen as a crucial supply route for Putin’s troops in the south of the neighboring country.

The explosion caused a fire on a train carrying fuel and at least three people died. On Saturday, the Russian president ordered the creation of a commission to clarify the explosion, assigning the FSB to reinforce protection measures on the bridge and on the electricity and gas structure that supplies Crimea.

On Sunday, divers assessed the damage at the site, and the Transport Ministry said freight and passenger trains were operating normally, with road traffic remaining limited – heavy vehicles must use a ferry service.

The case triggered a new version war, following the pattern of the conflict, although one party only blamed the other the next day, with Putin’s accusation.

An aide to Volodymyr Zelensky arrived shortly after the explosion to insinuate Moscow’s responsibility. “The truck was detonated entering the bridge from the Russian side, so answers must be sought in Russia,” wrote Mikhailo Podoliak. Like other Ukrainian officials who cited the bridge as a potential target, he did not hide his satisfaction, saying the action was “only the beginning”.

On the other hand, radical wings in Moscow had defined the explosion as Kiev’s declaration of war. A member of the Crimean parliament said anything less than an “extremely harsh” response would show weakness, which could be the key to tactical nuclear action – as already advocated by figures such as former president Dmitri Medvedev, who cited ” the destruction of terrorists” as a response to the current crisis.

The Moscow-appointed governor of Crimea, Sergei Aksionov, had also spoken of “a healthy desire for revenge.” On Sunday, however, Kremlin spokesman Dmitry Peskov dismissed the risk of Moscow making use of its nuclear doctrine now. “You’re asking the wrong question,” he said, according to Sputnik, when asked about the topic.

The most concrete answer, however, will come this Monday (10), at Putin’s meeting with his Security Council. Peskov declined to confirm whether the Kertch explosion will be a topic of the meeting.

According to The New York Times, a Kiev official confirmed, on condition of anonymity, that Ukraine’s intelligence service planned the blast, but could not say what happened to the truck driver or whether he was aware that it had happened. carried bombs.

The Kertch Bridge is symbolic of Russia’s 2014 annexation of the Crimean peninsula after the fall of Ukraine’s pro-Kremlin government. Four years later, the gigantic 19 km-long structure was inaugurated in a pompous fashion, with Putin present and defining the connection over the strait that separates the Black and Azov seas as a miracle.

In addition to symbolism, the bridge today represents an important supply route for Kremlin forces in the Kherson and Zaporijia areas and in the port of Sevastopol, Crimea’s main city. In seeking to ensure that the episode “will not affect too much” military supplies in the Kherson region, Russian-appointed deputy Kirill Stremousov pondered that yes, “there will be logistical problems in Crimea”.

Still in the context of the version war, on Sunday there were also accusations of terrorism by Kiev, after an attack killed at least 13 people and wounded 89 in a residential area of ​​Zaporijia, in southern Ukraine. The city integrates one of the newly annexed provinces by Russia in facade referendums.

“Zaporijia again. Merciless attacks on peaceful people again. In residential buildings, right in the middle of the night,” Zelensky wrote. “Absolute pettiness. Absolute evil. Savages and terrorists. From the one who gave this order to everyone who complied with it. They will take responsibility.”

The governor of the Ukrainian side, Oleksandr Starukh, said at least 12 missiles were fired from planes, damaging homes, apartment blocks and educational centers. Of the 89 injured, including ten children, 60 had to be hospitalized.

It was the third attack in a few days on the region considered strategic in the war. On Thursday (6), a missile destroyed a five-story residential building, killing at least three people. Earlier, Ukraine called “cynical” an attack also blamed on Russia against a convoy of civilian cars, which left at least 30 dead in late September.

This weekend’s crisis comes at a delicate moment in the war, when the successes of the Ukrainian counteroffensive have increased pressure on Putin, who last month ordered the mobilization of 300,000 reservists and waved at nuclear training. the first drop in its popularity since the neighbor’s invasion, from 83% to 77%, according to the independent institute Levada.

On the diplomatic front, the US said it would continue to supply weapons to Ukraine. “Putin started this war, and Putin can end it today, simply by withdrawing his troops from Ukraine,” said National Security Council spokesman John Kirby.

According to him, Washington has no indication that Russia has made the decision to use nuclear weapons and there is no reason to change the US stance in this regard. In a call to German Prime Minister Olaf Scholz, President Joe Biden called the Kremlin’s threats irresponsible.

Previous WhatsApp: 6 functions that are in testing and may soon arrive in the app | apps
Next ‘Frida’ opens Pontos MIS programming at MAC de Americana