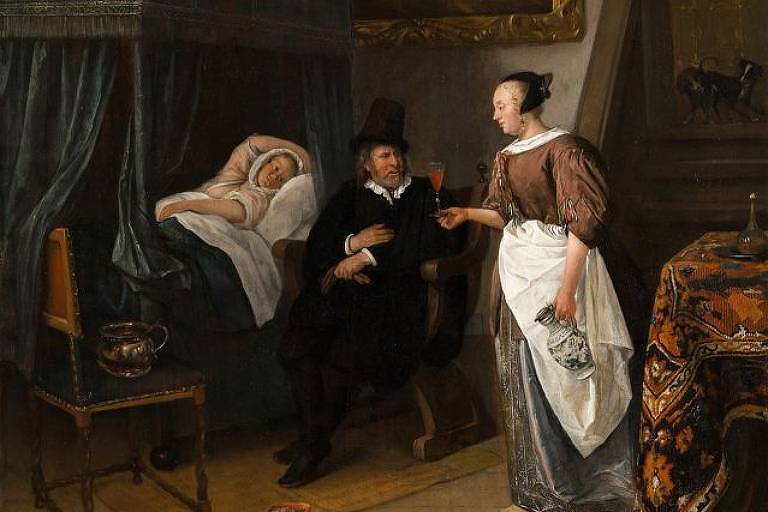 In the 17th century, Jan Steen (1626-1679) and other Dutch painters such as Gabriel Metsu and Samuel van Hoogstraten documented a curious epidemic of “love sickness” in the Netherlands.

And they weren’t the only ones.

At that time and at other times, writers, poets and playwrights also addressed the disease — even more than doctors —. The reason may be in the profile of the victims: they were mostly adolescent girls or apathetic young women.

The German physician Johannes Lange llamó classified the problem, in 1554, as “Morbo virgino” or “Virgin disease”.

The remedy, for Lange, was “to live with men and copulate. When they become pregnant, they will recover.”

The disease received other names, such as “Febris amatoria” or “love fever”, until Jean Varandal, professor of medicine at Montpellier, coined the term “chlorosis” in 1619.

Chlorosis, from the ancient Greek word “chloros”, means “greenish yellow” or “pale green”, which is reportedly what the skin of sickly young women looks like – although this is debatable, according to modern experts.

“Possibly many saw a greenery because they thought they should see it”, evaluates Irvine Loudon, from the University of Oxford, in an article published in the British Medical Journal.

The expert added in the article that the nickname “green disease” was perhaps due to the fact that women were metaphorically green, that is, without experience or maturity.

What is known is that the disease was classified as a nervous disease, and, in addition to nomenclatures, over the centuries it has been adding symptoms —in particular the absence of menstruation (amenorrhea)— and treatments, such as therapeutic bloodletting, hydrotherapy and ferrotherapy.

But the most recommended remedies were those that indicated behaviors “appropriate for a woman”: sex within marriage and conception.

And education was highly contraindicated for sick women.

Chlorosis is an enigma in the history of medicine.

It waxed and waned without a clear explanation, and drew particular attention in the early 19th century.

To give you an idea, in the historical records of the Finsbury Infirmary in London, between March 20 and April 20, 1800, the disorder “chlorosis and amenorrhea” was the second most cited, after “pulmonary problems without fever”.

In the 1890s, 16% of admissions to St. Bartholomew’s Hospital in London were for this reason.

Then, without a clear explanation, the disease records began to decline. In the early 20th century, these records disappeared, leaving questions: Could it be because the symptoms were attributed to a different diagnosis? Or because the treatment became more efficient by focusing on the patients’ diet, instead of their virginity? Or for some reason the disease was not diagnosed?

There are several hypotheses that try to explain this disappearance, generally mentioning improvements in the population’s diet and living conditions.

There were doctors who linked the disease to wealth, suggesting that the social mores of wealthier women, such as wearing tight corsets and leading a sedentary life with little exposure to sunlight and physical exercise, predisposed them to chlorosis.

Others argued that the disease was more common among overworked and malnourished girls who lived in large urban areas.

There are medical historians who maintain that it was simply a type of iron deficiency anemia. And there are also those who claim that it was a psychosocial illness, similar to anorexia nervosa.

However, as the pioneering hematologist Leslie John Witts commented in 1969, “there remains an uneasy feeling that the mystery of chlorosis, like that of Edwin Drood (a novel by Charles Dickens), remains unsolved.”

Today, the term “chlorosis” is still used, but to refer to plants that suffer from iron deficiency — the disease manifests as a loss of green color.

The term “green disease”, in turn, continues to be used in reference to hypochromic anemia, in which red blood cells have less color than normal when analyzed under a microscope. The most common cause is a lack of iron in the body, and the symptoms are similar to the disease that, for centuries, was treated as “a nervous woman’s thing”.

Previous Are Amazon Echo Buds any good? See Headset Price and Details | Headphones
Next Black Adam confirms another actress from the DC universe