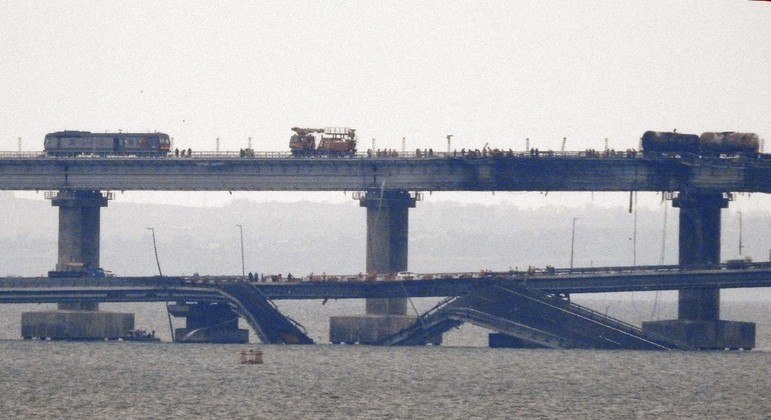 Crimean Prime Minister Serguey Aksyonov predicted on Monday that repairing the blast-damaged bridge, for which Russia blames Ukraine, will take around “a month and a half”.

“We are already working. I believe there are obstacles in the way, and we will do it in the shortest possible time,” Crimea’s prime minister told a public television station.

Aksyonov also predicted that on October 16 it will be possible to resume road traffic for trucks on the bridge, which connects the mainland to the annexed Ukrainian peninsula.

As for private cars, he estimated the wait time at a maximum of one hour due to the explosion on Saturday at the 19 km bridge. The prime minister also announced that four ships will start operating on Tuesday (11) to facilitate the transfer through the Kerch Strait, which separates the Black and Azov seas.

In turn, Russian Deputy Prime Minister Marat Khusnullin said that the damage suffered by the bridge’s pillars will be repaired by the end of this week and that, for that, the operators work 24 hours a day.

In addition, he assured that the Russian government is looking for an alternative for the transport of goods through the annexed territories of southern Ukraine, the regions of Kherson and Zaporizhzhia.

The alternative route to the bridge is about 359 km long, of which 180 km are already being repaired by the Russian Ministry of Transport.

One of the objectives of the Russian military campaign in Ukraine was precisely to create a land corridor between Russian territory and the peninsula, which depends on it for the subsistence of grain, water and electricity in southern Ukraine.

A truck that exploded early on Saturday morning (8) caused a fire in seven fuel tanks of a tank train and caused the collapse of two sections of the automobile part of the bridge, on which about 1 km of track was also damaged. iron.

The bridge, the longest in Europe and declared a military target by Kiev, was inaugurated in 2018 by Russian President Vladimir Putin himself at the wheel of a Kamaz truck.

Putin on Sunday accused Ukrainian secret services of what he called a “terrorist act”, after which he ordered massive bombings against major cities in the neighboring country, including the capital Kiev.

In addition, when meeting with the Russian Security Council, Putin threatened to carry out further bombings against Ukrainian civilian infrastructure if the attacks on the national territory by Kiev, which has neither claimed nor denied responsibility for the attack on the bridge, are repeated.

In this regard, Aksyonov on Monday expressed confidence that the massive bombings, described as an “unacceptable escalation” by the UN, will continue in the coming days.

Previous know how to choose the most suitable vacuum robot model
Next Article | ‘The Mist’, adaptation by Stephen King, is a powerful analysis of human barbarism

Skin and skull of the last known thylacine have been identified, solving a decades-long mystery. …