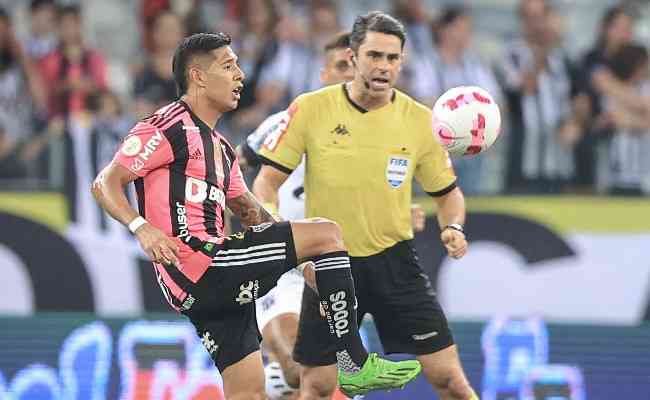 In the goalless draw against Cear, this Sunday (9/10), in Mineiro, for the 31st round of the Brazilian Championship, Atltico complained about an unmarked penalty just three minutes into the game. This Tuesday, the CBF released the audio of the analysis of the bid made between the VAR team and referee Flvio Rodrigues, who rejected the infraction.

The head referee, however, considered the move to be normal.

“He doesn’t do the extra movement. Even though his arm is slightly with his elbow open, he’s all the time throwing that arm back. He’s being careful all the time. I don’t see an intention especially because of the very short space and the speed of the ball. He has his arms behind his back and this ball catches. I will follow the game. I will not start with the penalty kick, no. I will follow the game”, he justified (see the audio transcript below).

VAR: Player has his arm behind his back, ok. He follows. Will follow. When he is about to cross, he opens his arm, t, and leaves his arm hard to have this contact with the ball, t, clearly blocking the passage to the ball.

VAR: Now I’m going to rewind this move so you can see his action before the crossover.

VAR Assistant: Opens the image. This one is closed.

referee: Come back again. Guarizo, but look at it. He doesn’t make the additional move. Although the arm is slightly open at the elbow, he is the entire time, throwing that arm back. He’s been careful all the time.

Previous Johnny Depp abandons the image of the heartthrob and appears unrecognizable in photos with fans | Series on Stage
Next Tell us: which game marked you the most?