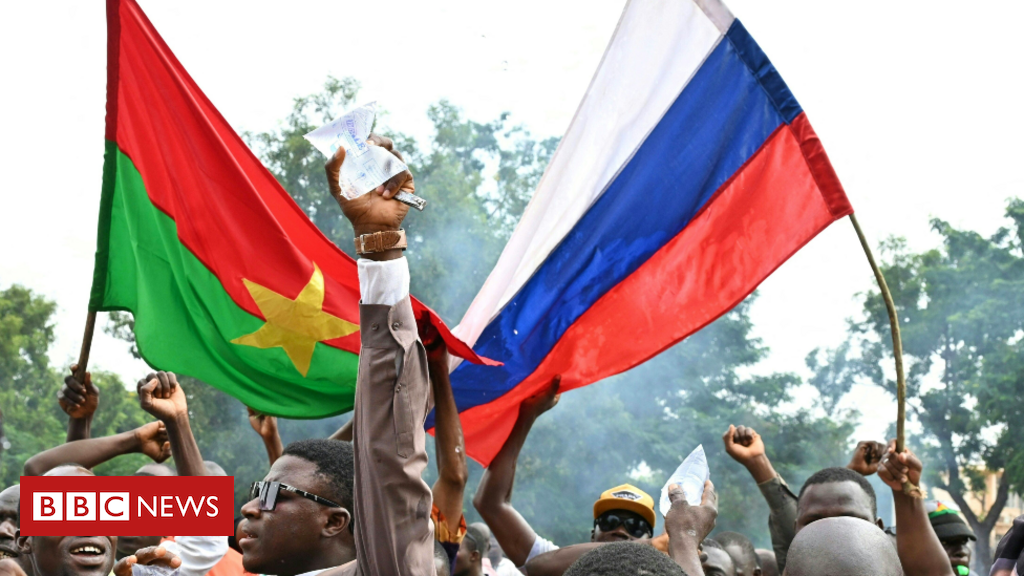 Why Russia is supporting coup in Africa

The most recent coup d’état in Burkina Faso was marred by images of young people waving Russian flags in the streets of the capital, Ouagadougou — something that must have pleased the Kremlin very much.

Although it was a very small number of flags, it sparked speculation that there may have been some Russian involvement in the events that led Captain Ibrahim Traoré to seize power in the country, beset by growing jihadist violence.

Yevgeny Prigozhin, an oligarch close to Russian President Vladimir Putin and founder of the Wagner Group — a mercenary organization active in several African countries — congratulated the young junta’s leader, describing him as “a truly worthy and courageous son of his motherland”.

“The people of Burkina Faso were under the yoke of the colonialists, who robbed the people and played their vile games, trained, supported gangs of bandits and caused a lot of suffering to the local population,” he said, referring to France, a former colonial power. .

And those who welcomed the coup in the West African nation not only waved Russian flags, they also attacked French institutions, including the embassy.

The violence has sparked unrest across the region, demonstrating once again the strength of resentment towards the French in many of the country’s former African colonies.

For nearly a decade, France has been trying to help armies in the Sahel region — a swath of semi-arid land south of the Sahara desert that includes Burkina Faso — to fight jihadist militants, some of whom are linked to al-Qaeda or the state. Islamic.

But he recently withdrew from neighboring Mali, also a former colony, after breaking ties with the local military junta, which is accused of turning increasingly to Russia for help in fighting the militants.

Sergei Markov, a former Kremlin adviser, was more direct in his remarks: “Our people helped the new leader [de Burkina Faso]. Yet another African country will move from cooperation with France to an alliance with Russia.”

For geopolitical analyst Samuel Ramani, this marks a shift from Russia’s usual reaction to political instability in the region.

“In previous coups, Russia has tried to position itself as an accidental beneficiary of regime change,” says Ramanai of the Royal United Services Institute (Rusi), a defense and security think tank.

“This time Russia is much more proactive in supporting the coup, and this has led to speculation that Russia played a coordinating role,” adds the expert, who is the author of the book. Russia in Africa.

This points to the Wagner Group, although Russia has consistently denied that the mercenaries have any connection to the state and there is no evidence of direct Russian involvement.

Shortly after taking power, Captain Traoré made it clear that he wanted to work with new international partners to fight Islamic militant groups that have been active in the country since 2015.

Many assumed he meant the Russians.

But with a focus on defeating the jihadists, he says he is also open to working with the US or any other country willing to help improve the country’s insecurity.

The US organizes a major annual counter-terrorist training exercise for West African countries — although this year both Mali and Burkina Faso did not participate in the so-called Operation Flintlock.

“I think Burkina Faso wants to avoid the trap that Mali has fallen into,” says Ramani, noting that Mali’s junta has been very hostile towards Europeans and Americans since it took power in 2020.

“They are now completely dependent and taken over by the Russian state,” he says.

“Once the Russians get in, they can’t get them out. The same thing happened in the Central African Republic.”

The Wagner Group has been active in the Central African Republic since 2018 — and its members are accused of human rights violations, including mass killings, torture, enforced disappearances and rape.

Holding groups like Wagner to account can be difficult, says Sorcha MacLeod, an associate professor at the University of Copenhagen in Denmark and chair of the UN Working Group on the Use of Mercenaries.

“When you have these mercenary representatives there, the state can get involved in an armed conflict without being an official party to the conflict.”

“And then you have plausible deniability… and of course that has huge implications when it comes to responsibility and accountability.”

Furthermore, her very presence can be counterproductive, she says.

“When these types of actors are drawn into armed conflict, the conflict is prolonged and there is a greater risk of war crimes.”

“The reality is that these organizations have no incentive to end conflict. They are financially motivated.”

The US agrees, saying Russian mercenaries are exploiting natural resources in the Central African Republic, Mali and Sudan to finance Moscow’s war in Ukraine.

In a clear warning last week, the US ambassador to the UN said it was a high price for Africa to pay.

“Rather than being a transparent partner and enhancing security, Wagner exploits client states that pay for its oppressive security services in gold, diamonds, timber and other natural resources — this is part of the Wagner Group’s business model “, Linda Thomas-Greenfield said at a UN Security Council briefing.

“We know that these ill-gotten gains are used to finance Moscow’s war machine in Africa, the Middle East and Ukraine.”

This may all explain Captain Traoré’s reluctance to put all his eggs in Russia’s basket.

“I think Traoré is trying to hedge his bets and show that he can try to balance all sides,” says Ramani.

“But of course any cooperation with Russia will almost certainly be a death sentence for France and the West. The Americans and the French are not going to coexist with the Russians.”

“That’s Traoré’s dilemma—does he side with Russia? Or do he run the risk of not having a real external supporter.”

However, the anger displayed by the Burkina Faso youth shows that dealing with the jihadist threat must be the priority of the new junta leader.

A regional leader noted this week that the country was “on the verge of collapse” because of insecurity.

However, there are doubts about how effective the Wagner Group fighters would be in Burkina Faso.

Although members of the group have been active in Mali for less than a year, early signs do not look good as jihadist attacks are on the rise, and they are being accused of human rights abuses.

The country is returning to the epicenter of the crisis in the Sahel, recording the highest number of deaths from militant attacks this year so far.

Furthermore, 2022 is set to be the deadliest year for Burkina Faso and Mali since the insurgency began.

“Wagner is good at creating chaos. But as a fighting force, he struggles, especially in new and hostile terrain,” says Ramani.

Still, he believes that the junta in the Sahel region may choose to work with Russian mercenaries given France’s failure to stop the spread of violence.

“Russia is seen as a stand-alone partner in terms of human rights and democracy,” says Ramani.

“It doesn’t even try to impose its way of life on you — and that is seen as very desirable for would-be autocrats and kleptocrats.”

Previous RICARDO FELTRIN – Record recovers system, but file remains hostage
Next Harcourt appears for the first time in new image from the film