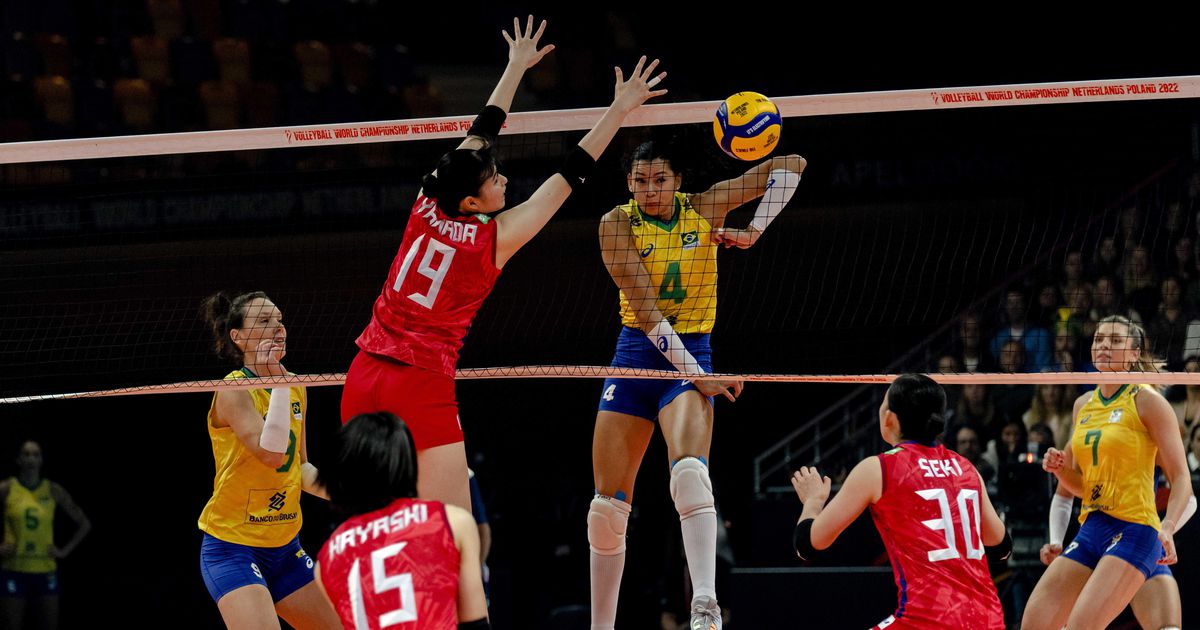 In one of the best games of this Volleyball World Cupa Brazilian women’s team sought a hard-fought victory to overthrow Japan, his tormentor in the first phase, and advance to the semifinals, in Apeldoorn, Holland. The national team was trailing by 2 sets to 0 before looking for an incredible turnaround on the scoreboard by 3 to 2with partial 25/18, 25/18, 22/25, 25/27 and 13/15.

The team led by José Roberto Guimarães abused mistakes in the first two partials and seemed easy prey for the Japanese, responsible for Brazil’s only defeat in the competition so far. Japan played impeccable until the beginning of the Brazilian reaction in the third set.

One of the leaders of the selection was, once again, Gabi, author of 25 points. Carol Gattaz, decisive in the last two partials of the match, scored 13, while Carol and Rosamaria contributed 13 each. For the Japanese team, the individual highlight was Hayashi Kotona, responsible for 21 points.

In the semifinal, Brazil will review Italy, the best team in the previous phase and one of the favorites for the title. Despite the good moment of the European rival, the Brazilian team prevailed in the direct confrontation by 3 to 2, in the second phase. The new duel between the two teams is scheduled for Thursday, again in the Dutch city of Apeldoorn.

Unsurprisingly, Zé Roberto sent to the court the climbing team with Macris, Tainara, Carol, Gattaz, Pri Daroit and Gabi, in addition to the libero Natinha. The biggest difference was Carol, who had not faced Japan in the previous match, still valid for the first phase. At the time, she had been spared due to physical problems.

Despite the momentum, after good performances in the second phase, the team started irregularly, with repeated mistakes. Concerned, the coach sent Rosamaria to the court, but the oscillations remained. The Japanese opened 10/5, Brazil reduced the disadvantage, but again lost ground due to punctual failures.

Japan scored 16/14 before imposing itself again with a resounding 21/16 on the scoreboard. More solid, the Asian team closed the first set. The second half followed a similar script, with the Japanese team leading the score practically from start to finish. Brazil fought, but could not balance the duel. The Japanese, almost flawless throughout the second set, closed another partial, opening 2 sets to 0 in the confrontation.

Under strong pressure, Brazil showed a reaction at the beginning of the third set. He started at the front and made it 8/5. At the same time that it raised its level, the selection saw the Japanese team make mistakes, something rare until then in the match. Gaining confidence, the national team closed the set and reduced the disadvantage in the game’s score.

The fourth quarter was more balanced. Japan, looking for a reaction, started in front, but without being able to take off on the scoreboard. The confrontation became point-to-point until the selection confirmed its third set point, tied the match and forced the tie-break dispute.

In the most decisive moment of the game, Brazil raised the bar even more and went on to hit all the fundamentals. Carol Gattaz and Gabi grew up on the court and led the national team in an even confrontation until 10/10, when the Brazilians opened 12/10 and led the hard-earned triumph.

Previous Xbox boss shares image of exclusive cloud gaming device
Next Which is the best choice between Google TV and Fire TV?