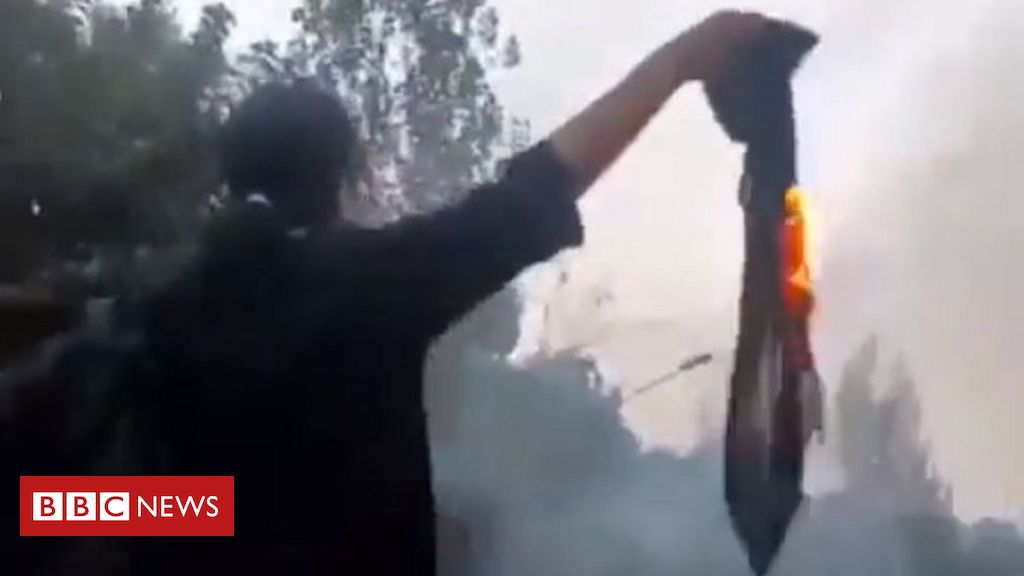 Nika Shakarami, 16, is seen standing on top of a dumpster and burning her veil in Tehran on September 20, as others chant anti-Islamic Republic slogans.

Hours later, Nika disappeared after telling a friend that she was being pursued by the police.

Iranian authorities showed another video, taken by security cameras, which showed that Nika was allegedly in another location at the time of the protests – suggesting that her death was not linked to the demonstrations.

But Nika’s mother Nasrin said the security camera footage released by authorities is not of her daughter.

Nasrin Shakarami accuses security forces of murdering his daughter. Iranian authorities said the young woman died after being thrown from a building under construction, possibly by construction workers.

Last week, Iranian state TV broadcast blurry footage showing a teenage girl or woman identified as Nika walking down an alley and entering a building through a door.

But Nasrin told the BBC on Monday that the person in this video was not his daughter. Another source close to the family also said that the way she walked was different from Nika’s.

Nasrin also claimed that his sister Atash and brother Mohsen were forced to make false statements about Nika’s death while in detention.

“They threatened to detain my brother’s four-year-old son,” she said.

In a TV report last week, Mohsen appears speaking out against the protests, while someone off-camera seems to whisper to him: “Say it, you bastard!” Meanwhile, Atash said that Nika “died falling off a building”. They were released after the statements.

Nika’s family said they located her body at the morgue 10 days after she disappeared, and that they were only allowed by authorities to see her face for a few seconds to identify her.

According to Atash, the Revolutionary Guards informed him that Nika was in custody for five days and was later handed over to prison authorities.

The mother said that Nika disappeared hours after participating in the protest portrayed in videos that circulated on social media in recent days.

In one, a girl dressed in black standing in a dumpster on the street waves a flaming veil. A crowd around her chants “death to the dictator”—a reference to the supreme leader, Ayatollah Ali Khamenei, who has the final say in all matters of state. Another video shows the same scene from a different angle.

“Like Nika, I have been against the mandatory hijab (Islamic veil) since I was a child. But my generation was not brave enough to protest,” Shakarami told the BBC.

“People my age accepted years of repression, subpoena and humiliation, but my daughter protested and she had every right to do so.”

“Generation Z” — defined as those born in 1997 and 2012 — have been at the forefront of protests sparked by the death of Mahsa Amini, a 22-year-old woman who was detained by morality police for allegedly violating the Islamic Republic’s strict hijab law.

Nika isn’t the only young protester to be killed during the riots.

The family of Hadis Najafi, 22, said she was shot dead by security forces while protesting in the city of Karaj, west of Tehran, on September 21.

Another 16-year-old girl, Sarina Esmailzadeh, reportedly died after being severely beaten on the head with batons by security forces during protests in Karaj on September 23, according to the NGO Amnesty International.

On Monday, the Iranian Society for the Protection of the Rights of the Child reported that 28 children had been killed during the protests.

Many other children were arrested and held in detention centers, according to the entity.

Previous Secret way to know if a contact is online on WhatsApp; but is it safe?
Next Rushing to go to the World Cup, Arboleda starts transition in São Paulo