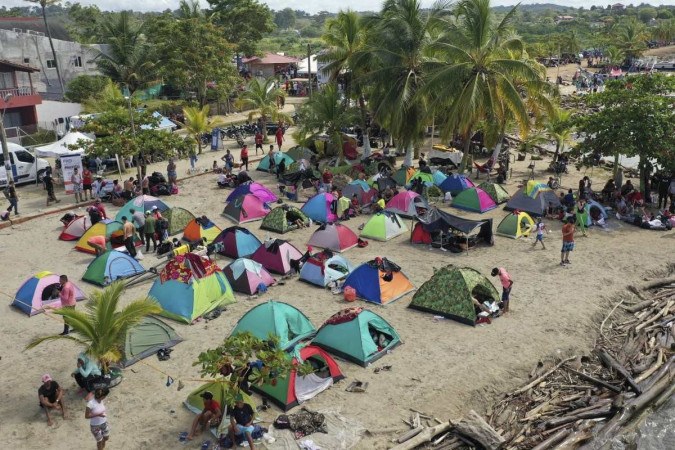 Record number of Venezuelans going to US causes crisis in Colombia

Amid a record flow of Venezuelans heading to the US, at least 10,000 are stranded in a Colombian port waiting for transport to cross the border with Panama, according to local media. Hundreds of thousands of immigrants, most of them from Venezuela, are risking crossing the dangerous jungle of Darien in order to reach the US, causing crisis in the cities where they pass.

Human rights activist from the municipality of Necoclí, Colombia, Wilfrido Menco, told the newspaper El Tiempo that migrants are waiting for boats to take them to the border with Panama, to continue their journey. “Right now, the tickets needed to go by sea to the border town of Acandí are sold out,” he said.

The number of migrants who arrived in Panama through the Strait of Darién, a dense jungle that interrupts the road that connects the Colombian border with Panama, has reached an all-time high in recent days, with more than 160,000 people risking the crossing, exposing up to armed groups and wild animals. Of these, nearly three-quarters are Venezuelans.

Menco reported an increase in foreigners in Necoclí, a village of 45,000. “Approximately 2,500 migrants arrive daily, most of them Venezuelans. We have seen that around 15 buses arrive every 4 hours and take them to the port,” he added. In addition to Venezuelans, Haitians, Cubans, Africans and Asians also cross Darién on foot, but in smaller numbers.

The arrival of Venezuelans in Colombia raises fears of a collapse in the transport system. According to Colombian authorities, more than 1,000 migrants have arrived daily at the Transport Terminal del Norte de Medellín, in the Department of Antioquia – before the flow was less than 200 people a day.

The situation also worries the authorities of Panama, where the migratory wave led to the fall of the chancellor, Erika Mouynes, who had requested international support to face the migratory wave. Fired, she will be replaced by Janaina Tewaney Mencomo, in a move considered surprising by the local press.

The increase in the migratory flow from South America to the US comes amid several economic and social changes in the region, including a worsening economy, a change in the visa policy of neighboring countries such as Costa Rica and Mexico, as well as rumors that the US government cannot deport migrants to their home countries.

In September, the US government reported that the number of migrants detained at the southwest border had surpassed a record 2 million. The movement is observed worldwide, where 1 in 78 people is considered displaced, according to the UN, with Venezuelans being the second largest group – behind Syrians.

In August, the Customs and Border Protection Service observed a change in the nationality profile of those trying to enter the US. The number of people from Cuba, Nicaragua and Venezuela equaled those from Mexico, El Salvador, Guatemala and Honduras – historically the populations that most migrated northwards. The number of illegal immigrants from the latter countries fell by 43% compared to August 2021, while the number of Cubans, Nicaraguans and Venezuelans increased by 175%.

As Washington does not have diplomatic relations with these three countries, the authorities cannot repatriate immigrants as they do with people from elsewhere.

Furthermore, experts consulted by Estadão in August explained that the new visa requirements for Venezuelans in countries such as Mexico, Costa Rica and Belize – part of a US pressure policy to contain the migratory flow – have led migrants to Darién, as they can no longer fly to the American border and cross on foot, as they used to.

The plight of Venezuelans in particular is an impasse for Biden, as the US has severed diplomatic ties with the government of President Nicolás Maduro. In most cases, US agents allow Venezuelans who turn themselves in to authorities into the country, where they can begin the asylum application process. (WITH INTERNATIONAL AGENCIES)

Previous Meta detects 400 apps that are stealing ‘Facebook’ and ‘Instagram’ logins
Next Angelina Jolie’s emotional email to Brad Pitt resurfaces amid legal battle: “You really wanted me to go away”