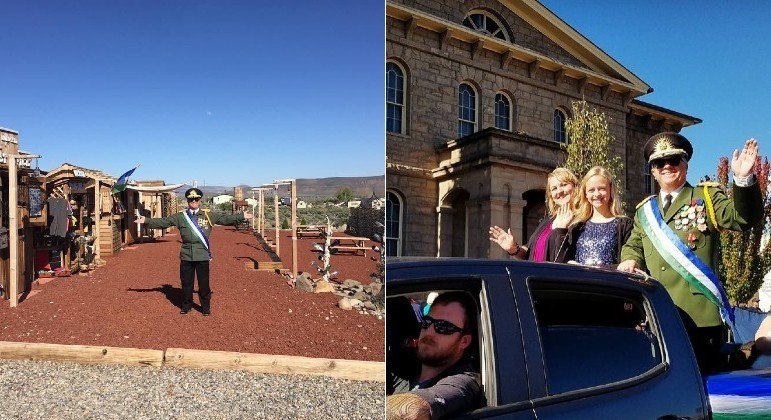 Self-proclaimed dictator creates micronation inside the US, protected by two kayaks – News

Kevin Baugh, or President Baugh, is the self-proclaimed dictator of the Republic of Molossia. A micronation nestled in the Nevada desert, USA, protected by an impressive navy of two inflatable kayaks and with an economy based on chocolate chip cookie dough.

The territory has 35 inhabitants and approximately 10 thousand square meters. However, construction on Molossia began far away, in a suburban home in Portland, Oregon.

At the time, the nation was still known as the Great Republic of Vludstein, with Baugh as prime minister and his best friend, James Spielman, king. Both were influenced by the British feature The Mouse That Roars (1959), satire about a fictional nation that declares war on the USA. “I was impressed with the imagination and creativity of it,” commented the Molossian dictator, as reported by the Daily Star tabloid.

After losing contact with Spielman, Baugh, who is also a former US Army soldier, has begun to gain ground with what was once just childish fun. “The internet came, and I could see that other people created their own countries”, he explained, “I turned Molossia from paper into a website of its own.”

About the great micronation he founded, the “benevolent dictator”, as he calls himself, explains that things work differently in Molossia: “We have our own measurement system and time zone, things like that.” Translation: The local measurement system is based on the size of Baugh’s hand and the dimensions of diet Pepsi cans.

Tourists visiting the country take about an hour to see all the attractions. On US independence, the president admitted that, in reality, there is an economic dependence “for almost everything” on the neighbors. “But within those boundaries, we take our nation very seriously and at the same time we have fun with it,” he said.

Speaking of kayaking, a humpback almost swallows two women sailing in one. Check it out below!

Previous European Parliament approves change in the nomenclature of USB cables
Next Textor wants standardization in a network of clubs, and Botafogo considers Adidas as a supplier for the uniform