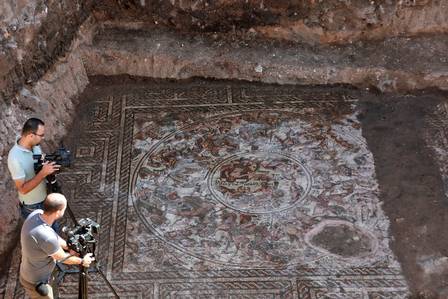 Syrian authorities on Wednesday unveiled a fourth-century Roman-era mosaic that is among “the most exceptional” and “most complete in the country”.

The 1,600-year-old mosaic was discovered in the town of Rastan in the central province of Homs.

It shows a scene in which “the details and names of the Greek kings who participated in the Trojan War appear clearly,” Hammam Saad, director of excavations and archaeological studies at the General Directorate of Antiquities and Museums, told AFP.

“There is no such mosaic,” Saad said, specifying that the work is not “the oldest” in Syria, but “the most complete and the most exceptional.” — The part discovered so far is 20 meters long and six meters wide.

This is the ninth mosaic discovered at the site. Land of millenary civilizations, from the Canaanites to the Umayyads, passing through the Greeks, Romans and Byzantines, Syria is full of archaeological treasures.

Some local sites were destroyed during the war that started in 2011. In the city of Homs, the Oum al-Zinar church was burned, the Khalid Ibn al-Walid mosque damaged and, in Rastan, mosaics were stolen.

Previous How new smart radar promises to rat out motorcyclists who get out of line – 10/13/2022
Next Libertadores Feminina: tournament starts amid record attendance and Brazilian favoritism | female liberators