The Real Madrid defender and possible call-up to defend Brazil in the World Cup Éder Militão has filed yet another lawsuit against his ex-wife, Karoline Lima. The player claimed that the influencer “surprised” him with Cecília’s pregnancy, stating that the influencer got pregnant “almost instantly”.

The information was initially disclosed by the Gossip do Dia portal. In another part of the process, the player’s defense claims that the defender would be offering about R$ 6 thousand in alimony to the couple’s daughter. He argues that a value higher than that would “harm” the livelihood of his own family, which is dependent on him.

Militão’s defense also points out that the career of a football player is unstable, and the payment of another amount would be unfeasible. In addition, it points out that the child’s mother is also responsible for raising the daughter and alimony cannot be confused with “early retirement for mothers”.

However, after the information on the page, the influencer’s defense presented evidence that the initiative for Karol to get pregnant came from the player. Prints of a conversation via WhatsApp were presented as evidence.

In another excerpt of the conversation presented by Karoline’s defense, Militão insists that the influencer withdraw the contraceptive method and get pregnant. 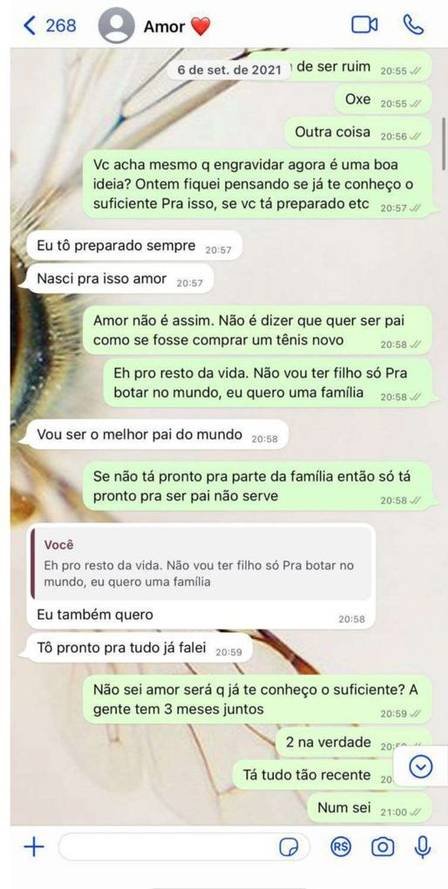 “We were once again surprised, especially because Karol was negotiating out-of-court Cecília’s pension with Éder. Karol hadn’t even involved legal counsel and didn’t want that exposure. Now we need to understand the process, study the case. We still don’t have access, nor have we received any kind of citation. We need to have access to the process and understand what he is alleging so that we can speak out”, explained the defense.

“If he is really talking about these absurdities, we have a way to counter all the points. Éder had a stable relationship with Karol and asked for his daughter. It wasn’t a surprise, it wasn’t instantaneous, nor was Karol looking to retire. No mother in the puerperium deserves to go through this. No woman deserves this humiliation. The truth will be re-established and justice will be done”, added Karoline’s lawyers.

Militão has a renewed contract with Real Madrid until 2028, with an annual salary of 7 million euros (approximately R$ 36 million).

Previous “Avatar 4” is on the way!
Next iPhone 14 Pro overshadows sales of iPhone 14 Plus, which may have reduced stock