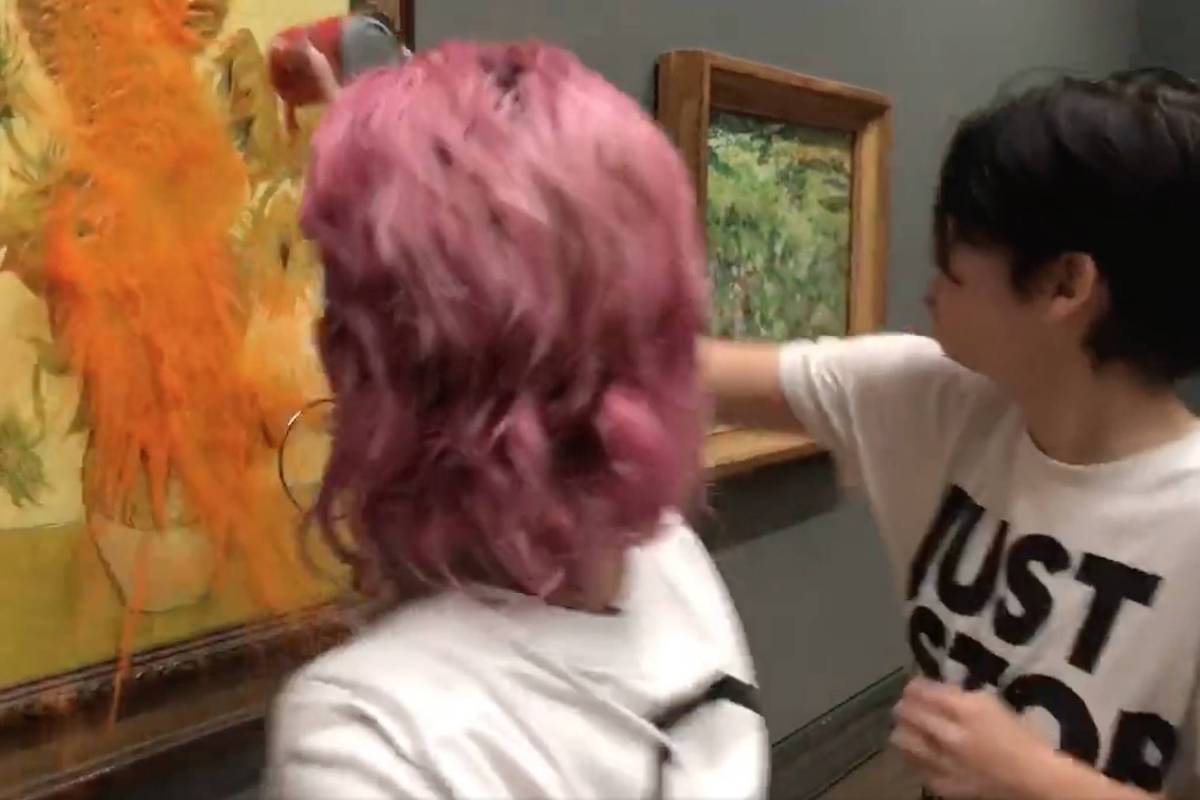 Two activists from the Just Stop Oil group threw a packet of tomato soup at “Sunflowers”, one of the main paintings by Dutch painter Vincent Van Gogh, as a means of attracting attention and putting pressure on the UK government to decree an end to the use of fuels. fossils.

In the images that circulate on the net and also released by the group, two young women throw soup on the painting and immediately apply glue to their hands and stick to the wall of the National Gallery, in London, where the painting has been on display since 1889. with the protection of a painting than with the planet and with people’s lives”, said one of the activists after questioning whether art was worth more than life.

Protected by a film of glass, the painting was undamaged, according to the gallery, and is now on display. Considered one of Van Gogh’s major works, valued at £84.2 million, “Vase with Fifteen Sunflowers” was painted in 1888 and is part of a collection of seven canvases with portraits of sunflowers. Of these, five are exhibited in galleries in countries such as England, Holland, the United States and Japan.

Also dating from 1888, the painting “Vase with Five Sunflowers” was destroyed in a fire during World War II in 1945, while “Vase with Three Sunflowers” is part of a private collection in the United States.

This is not the first action taken by the group, which seeks to raise a total of 50,000 pounds (about R$ 290,000.00) through crowdfunding to help with causes and deal with legal demands. In July, two activists glued themselves to John Constable’s painting “The Haycart”, also in the National Gallery, and a replica of Da Vinci’s “The Last Supper”, at the Royal Academy in England. Below the board, the group spray-painted the phrase “No New Oil”.

In the case of Constable’s work, the group covered the painting with what would be an updated version, showing the same angle as the original painting, only changing the setting for what they called an “apocalyptic vision of the future”, with the field destroyed. Paintings by the likes of William Turner, considered the forerunner of the English modernist movement, and Scotsman Horatio McCulloch were also attacked, as activists joined hands in protest against climate change.

Environmental activists across Europe have made works of art the main focus of their protests. In Italy, members of the Ultima Geração group glued their hands to the glass that protects “A Primavera”, a canvas by Sandro Botticelli, at the Uffizi gallery in Florence.

In France, a man in a wheelchair threw a white cream pie at Leonardo Da Vinci’s “Mona Lisa” at the Louvre Museum. The paintwork has not been damaged as it is also protected by a tough glass screen.

According to the Daily Mail, organizations such as Stop The Oil are maintained by three American millionaires, who saw their homes threatened by fires in Malibu and, since then, have injected money to pay salaries and carry out protests around the world. Aileen Getty, Rebecca Rockefeller Lambert and Peter Gill Cas are heirs to some of the world’s leading oil companies.

In an interview with the New York Times, Getty not only assumed to send money to organizations, but also minimized civil disobedience actions, which she assured were less harmful than the problems climate change caused by the use of fossil fuel.

In 2021, the government of then British Prime Minister Boris Johnson declared a target that by 2035 it would have already reduced the use of fossil oil in the UK, and that all electricity would come from clean hues of energy. At the time, experts and activists viewed the proposal with skepticism. Newly sworn in, the new Prime Minister Liz Truss has not yet positioned her government on the matter.