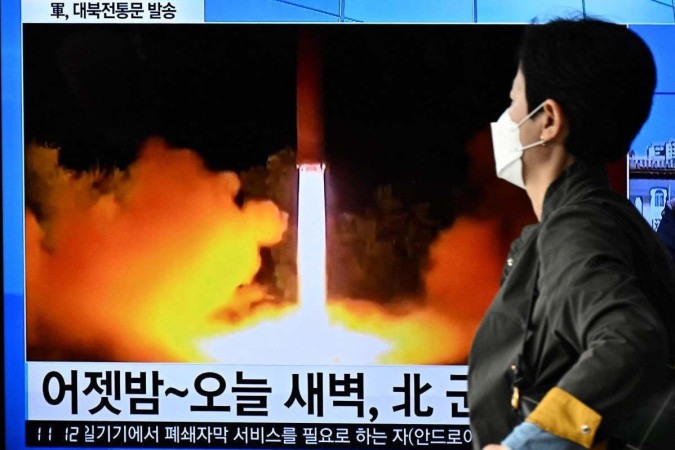 Seoul, South Korea- North Korea has carried out a ballistic missile test in recent days, fired a large artillery charge and sent fighter jets to the South Korean border, actions that have heightened tensions on the peninsula.

A North Korean army spokesman said the military exercises were ordered in response to “provocation actions” by South Korean artillery near the common border.

The Joint Chiefs of Staff of the South Korean Armed Forces reported, in turn, that ten North Korean planes were detected within 25 km of the border demarcation line at 10:30 pm on Thursday and at 12:30 am on Friday ( place).

In addition, North Korea carried out 170 artillery rounds overnight on the country’s east and west coasts, which Seoul said violated the maritime “defense zone” established in a 2018 agreement.

South Korea’s National Security Council on Friday denounced a series of “hostile actions” overnight and said “the provocations will have consequences”.

On Thursday, North Korea said it had launched two long-range strategic cruise missiles the day before. The projectiles traveled 2,000 km over the sea and hit their targets. The country’s leader expressed “great satisfaction” with the test.

The North’s recent missile launches were all “tactical nuclear” exercises, personally attended by leader Kim Jong Un, KCNA reported on Monday. “The Korean People’s Army units charged with the use of tactical nuclear weapons organized military exercises from September 25 to October 9 to verify and assess the country’s nuclear deterrent and counter-attack capability, which constitutes a stern warning to enemies. “, published.

The agency added that “Kim Jong Un, general secretary of the Workers’ Party of Korea and chairman of its Central Military Commission, guided the military exercises at the site.”

At a party congress in January 2021, Kim outlined a five-year military plan in which he outlined the development of smaller, lighter nuclear weapons for “more tactical uses”.

South Korea, Japan and the United States have stepped up joint naval exercises in recent weeks, angering the North, which sees the exercises as an invasion rehearsal and uses them to justify its missile launches.

The country revised its nuclear laws in September, contemplating a wide range of scenarios in which it could use its nuclear weapons, with Kim declaring North Korea an “irreversible” nuclear power, closing off the possibility of a dialogue on its denuclearization.

According to KCNA, the increase in recent tests was a response to maneuvers by the three countries.

Last week, Pyongyang fired an intermediate-range ballistic missile at Japan as officials and analysts say it has completed preparations for a new nuclear test.

North Korea’s claim that its missile launches are a “response” to US and South Korean exercises is part of “a well-known spiral dynamic” on the Korean peninsula, analyst Ankit Panda said.

“I am concerned that this is the beginning of a dangerous dynamic on the Korean peninsula, where we have two states in fierce rivalry and each face strong incentives to fire first in a serious crisis,” he warned.

North Korea has also released several photos of recent missile launches, tests and exercises, in which Kim is seen overseeing everything, giving orders and posing with soldiers.

Analysts also cited the fact that Pyongyang does not present the latest launches as tests of the missiles themselves, but of the launch units. “This suggests that these (launch) systems are deployed,” Jeffrey Lewis of the Middlebury Institute of International Studies wrote on Twitter.

Prior to the North Korean exercises, the United States redeployed its nuclear aircraft carrier USS Ronald Reagan to waters east of South Korea. Pyongyang criticized the carrier’s presence, saying on Monday that the United States “openly poses a military threat”, according to KCNA.