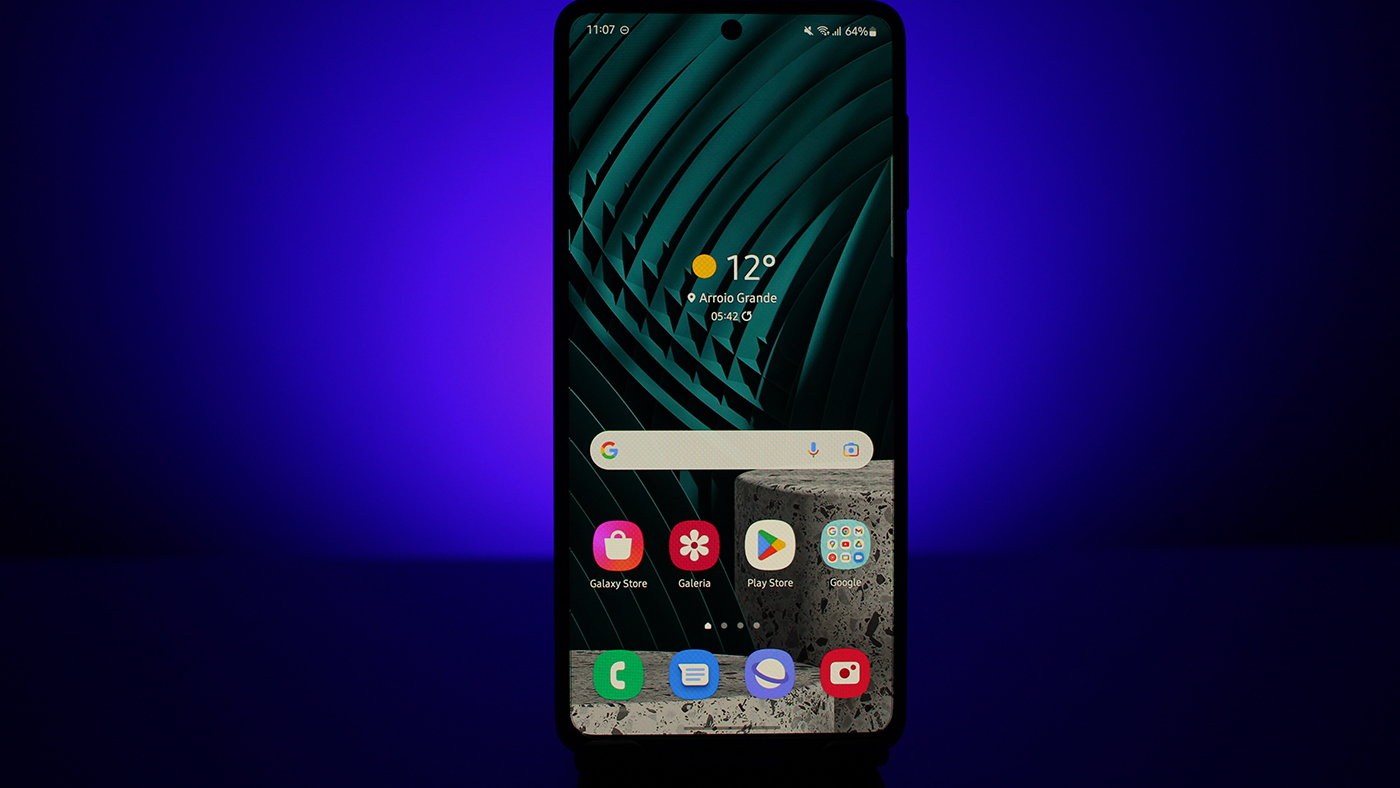 One of the most requested by the Roda Liso crowd, the Samsung Galaxy M52 5G was with us for a while and went through a series of tests involving battery usage, gaming performance, benchmarking and cameras. It is a smartphone with a competitive price and very attractive hardware, which arouses interest from conventional users – who need a companion capable of supporting all day without crashes, with good response in the cameras and battery that does not leave in hand – to the comrade who likes to skin his device in long plays in the heaviest games on the Play Store.

But come here, is it worth buying the M52 for this purpose or is it just a light-use smartphone?

Launched in 2021, the Galaxy M52 5G has a design from Samsung’s past line, despite this, the product design has its advantages. The biggest one is being thinner than the products in the current line. It’s only 7.4mm thick.

The plastic back cover has something similar to the “pin stripes” you see on men’s suits, which give the M52 a subtle elegance. If used without a protective cover, the M52 is thin and has a great grip, however, the presence of a protective cover, as the name implies, protects the cell phone from being damaged in case of falls.

It is important to say that the Galaxy M52 5G DOES NOT HAVE a P3 headphone jack, but it adds an adapter in the box for you to connect your headphones via the USB-C port (so it is impossible to listen to music and recharge the battery at the same time). Now, what comes with the M52 is the 15W charger. And the fingerprint sensor is on the side, next to the power button.

The phone is thin, as already mentioned, and the other measures follow the pattern to accommodate the large screen of 6.7″ Super AMOLED Full HD with refresh rate of 120Hz – crucial attribute for better gaming performance. The display has vivid colors that can be quickly configured by the user in vivid and natural modes.

I confess that only 15W of maximum capacity of the charger is well below what we have seen, especially in competitors. The Realme Q3s, a direct competitor to the M52, for example, has twice the capacity (30W). But this “problem” can be easily circumvented if you have a battery capable of supporting a full day with no chance of letting you down. The Galaxy M52 5G has, on paper, a 5,000mAh battery. Is it enough? People tested.

The meticulous test that cell phones are subjected to here involves browsing social networks, using a camera making video for 1 hour, watching videos on Youtube and playing casual games. The sum of the tests resulted in 7h45 of use and the Galaxy M52 5G achieved a great result, ending the stress sequence with 19% of battery remaining. After that it remained on standby for another 15 hours and burned another 8%, with 11% remaining. Great performance!

It’s the Oficina da Net Battery Ranking has a new representative of the TOP 7 best batteries tested. The M52 was ahead of the Moto G9 Power which has 6000mAh and well ahead of the competitor Realme Q3s. For charging the battery from 0-100% the Samsung device took 1h30 to complete the charge.

Leaving for the performance test, the M52, whose hardware has a Snapdragon 778G processor, 6GB of RAM, 128GB of storage, was thrown to the benchmarking lions. In the AnTuTu test it received an average score of 501,340 points – ahead of the, PASMEM, Galaxy S21 FE 5G (with at least BRL 1000.00 difference between them).

Excited about the excellent performance in benchmarking? The Galaxy M52 5G also passed the Roda Liso tests, with MEDIUM settings, considering its price range and processor. I highlight the good performance in the Genshin Impact, whose seal received was a Smooth Wheel with an average of 45 fps with 97% stability. Very good.

Despite that, in PUBG the M52 fell short of expectations, made only 40 fps with 100% stability, embittering a WHEEL seal in this game. Overall the Galaxy M52 5G did pretty well on Smooth Wheel, as long as you use Medium graphics settings. Check all tests and results at this link.

Does the Galaxy M52 5G camera array make good photos? Do you have any sensors that stand out or are they all very similar? We also tried to take pictures in all the possible scenarios that you may encounter in your daily life to see if the 64MP main sensor goes well on sunny days, night, gray days and everything in between. The main set is completed by a sensor of 12MP for ultrawide photos and 5MP for Macro. On the front are 32MP. Let’s take a closer look at each of them.

The main sensor is intelligent in observing the colors and the amount of light available in the scene, causing a result very close to what our eye is also seeing. Good to remember that you can adjust the brightness manually after touching the screen to establish the desired point of focus and thus adjust the way that is more pleasant for you.

There’s a photo of flowers, taken indoors, so you can see how beautiful they were live. The straight lines present in the architecture of a mall also generate great portraits with perspective. I like taking pictures like this. Add that to mirrors and voila, lots of cool photos.

We also took photos in portrait mode with the main sensor, the result of which you can see in the gallery. The M52 5G made a cut as fair as possible, due to the change of colors in the scenery and was messed up in some points as in the leaves of the palm tree in the background, which were simply out of focus. Getting closer, the clipping gets much better, in fact, highlighting the character in question. See the gallery:

For ultrawide photos you will have a greater angle and also the loss of final quality of the photo, since we only have 12MP. The colors stay in line with reality.

The macro sensor, in turn, makes your photos nice, up close, but it’s hard to find the right focus distance and the photos are more pixelated. In my humble opinion, it’s an unhelpful camera mode.

In this regard I will also add photographs in environments with less light, indoors, indirect light, etc. It’s simply the terror of cell phone cameras. In the case of the Galaxy M52 5G, it is possible to notice noise in the darkest corners of the photos, shaky if you take photos with the cell phone still in hand, but it does the trick.

To close, the 32MP selfie sensor does a great job, catching at times when the light is impaired. If you know how to position yourself properly, with light coming your way, satisfactory results are possible at night too. The crop offered by portrait mode is also not bad. Check out this selfie gallery:

How much is it worth paying for the Galaxy M52 5G?

The current price makes the dream of buying a Galaxy M52 5G in 2022 more distant, but if the value is below R$ 1400.00, the choice is right. The M52 is an excellent smartphone for the price range.

Important: Samsung has withdrawn the Galaxy M52 5G from its production line, so as soon as the in-person and online retail stocks run out, it will no longer be possible to purchase this new device. This fact does not invalidate how good the smartphone is, it just warns that future Android updates may not arrive for Galaxy M52 5G owners.

So my friend, the Galaxy M52 5G really delivers what we expected, doesn’t it? the smartphone proved versatile to serve users looking for a great smartphone for everyday use, taking pictures, keeping social networks active and everything in between. It also didn’t do badly in gaming performance and especially in battery consumption. In cameras the result is satisfactory without major problems.

Then check out the notes that the Galaxy M52 5G received:

Previous CBF responds Corinthians, admits that the ball did not touch Léo Pereira’s belly, but sees the referee’s hit | Corinthians
Next Protests in Iran: Basic guide to understanding the demonstrations