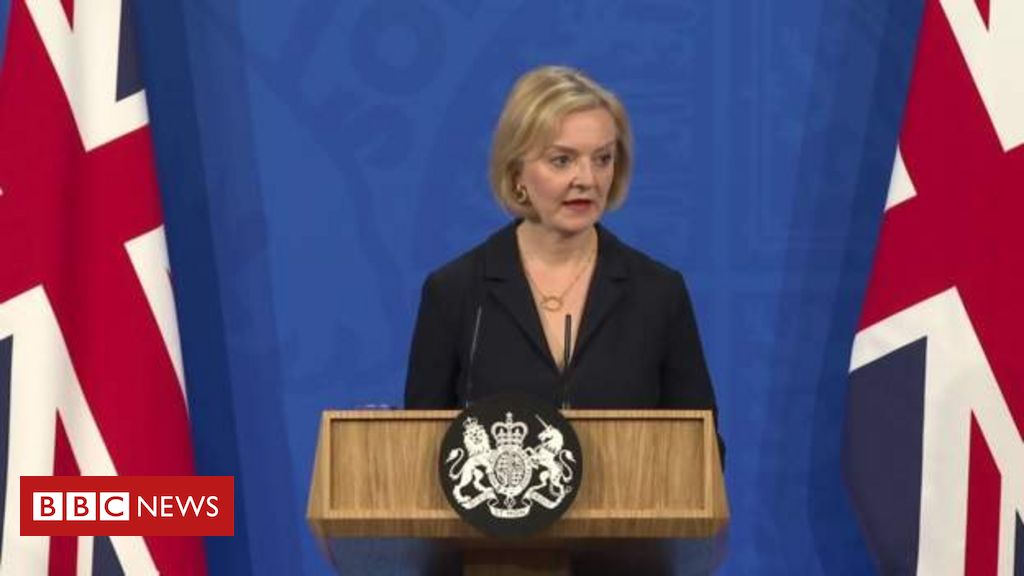 United Kingdom: 4 points to understand crisis that threatens the post of prime minister

The announcement, made three weeks ago, of a fiscal plan that provided for a series of rate and tax cuts provoked a broad negative response from the markets and led to the resignation on Friday (14/10) of Finance Minister Kwasi Kwarteng.

In a brief speech after a day of many uncertainties, during which the resignation of the prime minister herself was up for debate, Truss reaffirmed that the government would go back on implementing the plan, admitting that “parts of our mini-budget went further and faster” than the markets expected.

But she insisted she would remain prime minister to fulfill her “mission” of growing the economy.

“I am absolutely determined to deliver on what I promised – to deliver a faster growing and more prosperous UK to help us weather the storm we face,” Truss said in the Tuesday afternoon remarks.

She took over the UK government on 6 September after Boris Johnson resigned.

We list below some of the main points necessary to understand the imbroglio that threatens the Prime Minister’s government.

The calculations are that the plan would cost 45 billion pounds (R$ 266 billion) to the public coffers.

The package was a ploy to try to stimulate the economy at a time when the country is suffering from high inflation and is about to enter recession.

After the plan was announced, however, the British currency fell to an all-time low against the dollar, borrowing costs rose sharply, and the Bank of England was forced to step in, announcing a bond buyback program.

Before his resignation, Kwarteng had already backtracked on some of the points announced on September 23.

In her speech on Tuesday, Truss relented further and confirmed that the UK corporate tax will increase to 25% in April 2023.

She said the measure was expected to raise £18bn a year in tax revenue for the government and act as a “down payment” of its economic plan.

“I want to be honest: this is hard,” Truss said. “But let’s get through this storm.”

Even before Truss’s official announcement, Kwasi Kwarteng confirmed his resignation as finance minister in a letter on Tuesday.

He was in Washington for International Monetary Fund (IMF) meetings, but was recalled yesterday (10/13).

Kwarteng told BBC News that the tax cut proposals had become “a big distraction from what was a strong package”.

Asked if he owed the British an apology, the minister said he was sensitive to the reactions. “We listen to people. And yes, there’s humility and contrition in that. And I’m glad for that.”

He added that he had “the humility to say ‘look, we were wrong and we are not going to proceed with the cut'”.

Truss said the new minister shares his vision for the country and will make a statement on his economic plan by the end of this month.

Truss has been in office for less than 40 days

Liz Truss has been prime minister since September 6 and is already facing great turmoil in her government. She was chosen leader of the Conservative Party after an internal vote.

The current prime minister replaces Boris Johnson, who resigned in July after a crisis sparked by a sex scandal involving Chris Pincher, a Conservative lawmaker close to him.

Before being named prime minister, Truss was foreign minister in the Johnson administration.

In the internal vote that elected her, she even trailed her main competitor and former finance minister Rishi Sunak in several rounds of the election, but widened her advantage in the final weeks.

Truss took the helm, vowing to cut taxes and deregulate the economy in a bid to “make the UK move”.

But Truss’ economic plan spooked financial markets and sparked an outcry among Conservative lawmakers, who demanded that the prime minister abandon parts of her economic plan.

There were also those who advocated Truss’ resignation and the calling of a general election amidst the turmoil in Westminster.

Even after the announcement of Kwarteng’s resignation and the decision to back out of the tax cut, some Conservative lawmakers continue to insist that the prime minister leave office in what a veteran politician called the BBC “a mega disaster”.

Rachel Reeves, the economics chief of the opposition Labor Party, said a new government led by her party was “what this country needs”.

But the British prime minister has ruled out a general election until 2024, and with the government’s vast majority in parliament, the opposition believes it is too difficult to force one.

In her speech, the prime minister also denied any possibility of resigning and said she was “determined to deliver what I promised” before abruptly leaving the government.