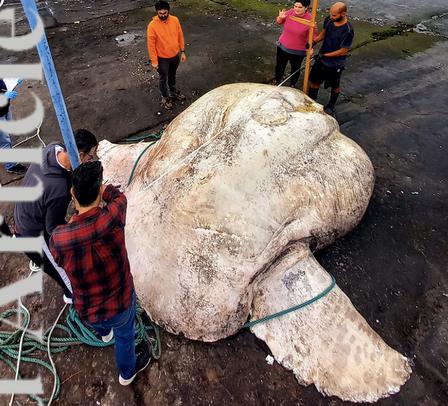 2.7-ton sunfish found in Portugal is recognized as the largest in the world

A sunfish weighing 2.7 tons that appeared off the coast of the Azores – an autonomous territory of Portugal – in December last year was recognized as the largest in the world found to date. The information was confirmed by the scientific community this Friday, with the publication of an article in the journal “Journal of Fish Biology”.

The animal measured 3.25 meters in length and 3.6 meters in height. The previous record was for a sunfish found in 1996 in Japan. This specimen weighed 2.4 tons.

— We collected the data with all scientific rigor and presented our data to a scientific journal, which validated them, including the calibration of the balance. And, given the documentary evidence that we have shown, they accepted the article for publication. As such, it is validated by researchers and the scientific journal — explained José Nuno Pereira, from the Associação Naturalistas do Atlântico, in an interview with RTP.

Researchers believe that the sunfish found in the Azores died after hitting a boat, as it had a bruise on its head, possibly caused by a blow.

Examinations carried out on the animal did not find any plastics or other harmful elements in the sunfish’s stomach.

December is known as a festive month, when cities around the world are lit up …