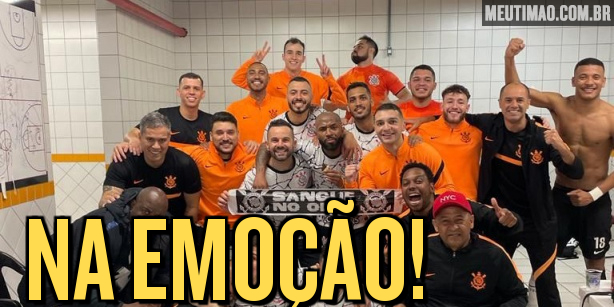 This Saturday afternoon, Corinthians futsal team played a great match against Joinville. In a valid game of the return match of the quarterfinals of the National Futsal League (LNF), the teams drew 1-1, guaranteeing the alvinegra classification by the aggregate score of 5 to 4. The match took place at the Complexo Centreventos Cau Hansen Stadium, home of the Santa Catarina team.

The Parque São Jorge club ended the match with two fewer players, as they were expelled during the match. However, Deividy’s defensive strategy was successful and Timão managed to qualify for the LNF semifinal. Now, it is enough to know if Timão will face Jaraguá or Carlos Barbosa, who will face each other tonight.

In time: the match was held with a single Joinville crowd. This was determined by the LNF aiming at the safety of the match.

Write it down, Faithful! The Corinthians futsal team returns to the court next Monday, at 7:30 pm, when it receives Guarujá, for the State Futsal Championship, at the Wlamir Marques Gym.

Besides them, Lé, Baby, Yan, Levy, Vanderson, Lucas Martins, Kauê, Bazinho and Canabarro also traveled to Santa Catarina and were present at the match.

Under boos from the crowd, Corinthians took a while to impose itself in the first stage. During the first six minutes of the match, the Corinthians defense was shot by Joinville, forcing Lucas Oliveira to make great saves and the white-and-white players to practically form a barrier in front of the goal.

With one minute left in the game, Lucas Oliveira was forced to make a great save after the rival shirt 20 kicked from outside the area. Then, at three minutes, Tatinho received a yellow card after kicking a ball that was on the side of the Santa Catarina team and delaying the restart of the match.

So, coach Deividy was forced to change the team, removing Deividy and replacing Kauê. Now with a more fixed pivot, Corinthians managed to work the ball better, reducing Joinville’s superiority.

With the teams leveled, the match became more truncated, but the Santa Catarina team remained superior. Corinthians’ first submission only took place in the tenth minute, when Canabarro shot towards Willian’s goal, who made a great save.

in the next minute, Fabinho, the opposing player, gave Kauê an unfair entry. During a lateral, the black-and-white pivot fell to the ground and the athlete from Santa Catarina stepped on his arm. Shirt 18 felt a lot and was substituted, but returned to the match moments later. Fabinho received only a yellow card.

Almost! At 12 minutes, after a good exchange of passes, Deives was face to face with the opposing goal, but Willian managed to grab the ball at the feet of shirt 10.

In sequence, the match started to heat up, with both teams making a lot of fouls and the referees having difficulty managing the game. However, around the 16th minute, the game became calmer.

In the rest of the first stage, the game was more equal, but with a slight superiority of Joinville. The people from Santa Catarina suffocated Corinthians, who were scoring in half-court, and Lucas Oliveira was more demanded than Willian.

What a defense! With just 30 seconds to go in the first half, Daniel, a Joinville player, took a hit from the middle distance, but Lucas Oliveira managed to make a great save. This was the last crucial move of the initial stage and the teams headed to the locker room.

On the way back to the final stage, Corinthians did not take a minute to open the scoring. Allan made a great individual move, leaving the opponent’s marker on the ground and swinging Joinville’s nets. Aggregate score: 5 to 3 for the People’s Team.

In the celebration of the goal, Tatinho received the second yellow card for provoking the opposing crowd and was sent off. The athlete would be substituted, but at the time of the goal he was still on the field, so Timão had to play two minutes with only four athletes on the court.

Soon after the expulsion, Joinville managed to create a goal chance, but Lucas Oliveira made an excellent save. A few seconds later, the Santa Catarina team scored again, but this time the ball hit the post.

Scraped past! With five players already on the court, Corinthians managed to put together a good move on the left side of their attack and Levy managed to finish, but Willian defended.

At six minutes, Joinville activated Pepita in the attack. The 88 shirt would be face to face with Lucas Oliveira, who left the area to move the ball away. Nonetheless, the goalkeeper fouled the opposing striker and was sent off.

Then the match got hot again. Joinville looking to tie the aggregate score, the crowd pulsing the gym and Corinthians with two fewer players made the game more stuck and missed.

The Santa Catarina team continued to pressure Timão and was superior in the match during the following minutes, but failed to convert into a goal. Even when the timer marked 17, the line goalkeeper was triggered to try to swing Vanderson’s nets.

Corinthians closed in on the defensive field and together with Vanderson formed a barrier in front of their goal. Joinville was stifling the People’s Team in search of equalizing the aggregate score and taking the match to extra time, but it was being ineffective against the goal.

With emotion until the end, with just three seconds left in the match, Joinville kicked towards the goal, but the ball passed just scraping Vanderson’s goal. Then the goalkeeper threw the ball up and the referee declared the end of the match. Corinthians is classified for the LNF semifinal!

Previous Crying heavily, Richarlison was heartbroken in the locker room after a calf injury; Brazilian is very worried about the World Cup
Next Mel Gibson called to testify against Harvey Weinstein in trial