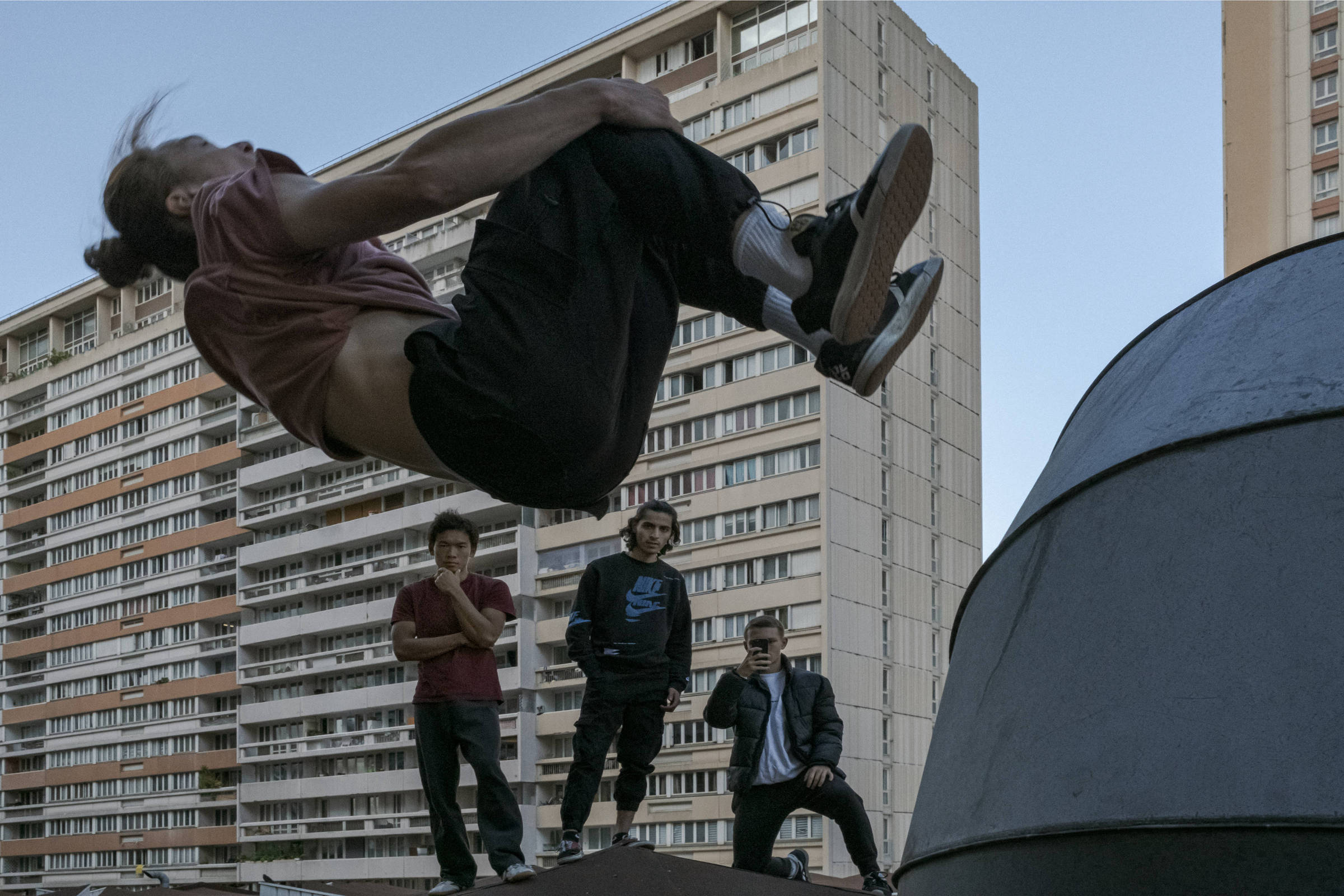 After taking a few steps back and starting to run, Hadj Benhalima dashes towards the building, pushes the wall with his foot, propels his body up and stretches his arm. At the height of the jump, he flips a switch, more than 10 feet off the ground. There’s a click, and the bright lights of a nearby barber shop go out. “Oooh,” friends of his applaud, as the slender 21-year-old lands on the sidewalk.

It was the second shop sign he’d turned off on a recent nighttime foray into Paris’ upscale neighborhoods. Many more would follow, with him jumping and somersaulting through the city.

In the last two years, groups of young parkour athletes – a sport that consists of running, climbing and jumping over urban obstacles – have circulated through large French cities, erasing store signs at night, to try to combat light pollution and save energy.

Videos of his exploits, showing Spider-Man-like acrobats clinging to stone facades and balcony edges before plunging the streets into darkness at the flick of an elevated switch, are popular on social media.

But so-called “lights off” operations have gained more attention in recent months, with France embracing energy conservation efforts to tackle Russia’s gas bottleneck in Europe. Paris, the “city of lights”, is the preferred target. While historic monuments now go dark earlier than usual, many shop signs remain lit all night.

“Everyone can contribute in their own way,” says Kevin Ha, leader of the On The Spot Parkour collective, which has about 20 members. “We put our physical abilities to good use.”

Several times a month, Ha and his companions can be found hopping around Paris, looking for advertising signs about awnings or illuminated store names. They look for the small emergency switches installed outside stores, 10 or 10 feet high, which usually only control the exterior signs — not the windows that bathe the insides of stores in blatant light.

Elegant areas like the Champs-Élysées avenue are the ideal playground. Walking down the lane, they turn off the signs of the luxury stores one by one, hitting their targets like snipers.

While scaling someone else’s property to turn off lights might seem like a form of trespass, parkour athletes — nonviolent vigilantes, to some — insist that the activity merely imposes rules that are rarely respected. More than a decade ago, the City of Paris issued orders requiring stores to turn off lights and windows from 1 am to 6 am, but the ordinance is largely ignored, with little consequence.

“For 10 years there was no monitoring, no control or no sanction,” says Anne-Marie Ducroux, head of the National Association for the Protection of the Night Sky and Environment, which has long lobbied to scale up efforts against light pollution.

That’s why the members of On The Spot took matters into their own hands. The group often heads to the so-called Golden Triangle district, the epicenter of French luxury in western Paris, where elegant Haussmann-era buildings with cream-colored facades line up.

Enforcing orders in place of authorities certainly enters a legal gray area. But the group claims that all police officers they meet on patrol approve of the initiative — as long as it doesn’t cause harm. And they have the support of the City Council.

“They are right to act,” says Dan Lert, Paris’ deputy mayor responsible for the environment. “It’s also thanks to them that we’re going to end these shocking habits.”

Dali Debabeche, another On The Spot member, claims that these nightly missions allowed him to hone his parkour skills while “sending a message” about environmental protection. “Two birds with one stone.”

Ha, 30, says that the collective was inspired by the Wizzy Gang, from the city of Rennes. The video of one of these performances on Instagram in 2020 had over 700k views. Soon similar initiatives emerged. “We are a generation that is impacted by global warming,” says Mathieu Brulard, 27, of the Wizzy Gang. “I no longer believe that the solution will come from political leaders.” To him, these patrols are just the latest example of a younger generation ready to act.

Smaller cities in France must comply with government-issued lights-out decrees similar to Paris. Rules that officials say could save enough electricity to power 750,000 homes every year.

On a recent nighttime expedition by On The Spot, the streets glistened with dazzling signs. “Great,” said Benhalima, with clear excitement. Seeing the gleaming sign of a bank where he has an account, he ran to climb a gutter and shut it down. “My favorite,” he said, with a smile.

Many of the target stores did not respond to the parkour report. The others said their signs were lit up at night due to problems with the automatic control systems. Some officials said they were unaware of the decrees and questioned the legality of the group’s activity.

The move has perhaps never been more relevant than it is today, with France moving towards what President Emmanuel Macron has called a new era of energetic “sobriety”.

Paris authorities recently began turning off ornamental lights on monuments earlier, as part of a plan to cut energy use by 10% this winter. The government also issued a decree standardizing rules for turning off lights on advertising signs across France: they must be turned off from 1 am to 6 am, and violation is punishable by a €1,500 fine.

Ducroux says the new rule lacks the ambition needed in the current crisis. But Ha claims he noticed some stores stopped leaving their lights on after his group turned them off. He hopes others will follow suit. “At least I’ll sleep better.”