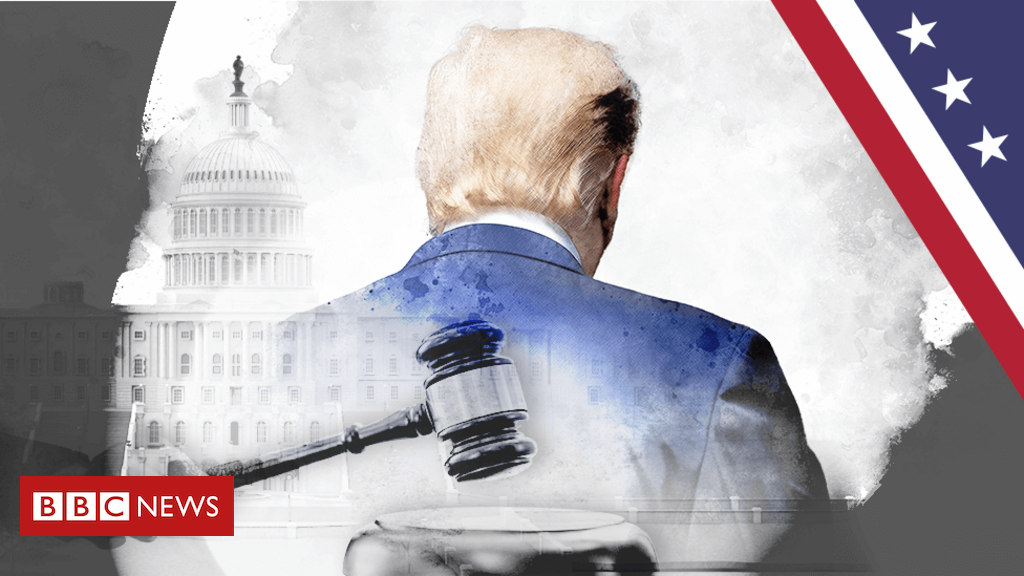 What are Donald Trump’s main problems with the law

Donald Trump, former president of the United States, must face several battle fronts in American justice. He is facing lawsuits for actions in the federal government, but also in his life as a businessman.

Trump is under investigation for his handling of top-secret documents, but also for the price placed on his New York penthouse, as well as facing several other lawsuits.

Four investigations in particular could have the biggest impact on the Republican – personally and politically.

All are ongoing and have not yet resulted in criminal charges.

The Justice Department is investigating the removal of government documents from the White House, which were taken to Donald Trump’s Florida estate, known as Mar-a-Lago, after he left office.

Investigators are evaluating how these documents were stored and who may have had access to them.

The former president’s sprawling beachfront property was searched in August by agents of the FBI, the US federal police. About 11,000 documents were seized, including about 100 marked confidential. Some of them have been labeled top secret.

There is not much information about what is in the docs. But classified material often contains information that officials think could harm national security if released.

Trump has denied wrongdoing and criticized the Justice Department’s investigation, calling the investigation “politically motivated” and a “witch hunt”.

He has offered fickle defenses that rely primarily on the argument that he stripped the material of secrecy when he was president. There is still no evidence that this is true.

The former president also argued that some of the documents are protected by “privileges” – a legal concept that would prevent them from being used in future lawsuits. An independent attorney is reviewing the seized material to determine whether that argument applies and whether the case should continue.

But Trump did not directly address the key question: why were the documents in Mar-a-Lago?

This is an active criminal investigation and may result in charges.

The Justice Department believes Trump may have violated the Espionage Act by keeping national security information that “could be used to harm the United States.”

And in addition to the charges related to the classified documents themselves, prosecutors are also looking at obstruction of justice as another potential crime.

Trump’s legal team is now focused on a legal battle with the Department of Justice over the investigation.

New York prosecutors are investigating actions by the Trump Organizations, a company owned by the former president’s family. There are two investigations in New York – one civil and one criminal.

Letitia James, New York’s attorney general, is leading the civil investigation (which cannot result in criminal charges) and has spent nearly three years analyzing whether the former president’s company committed fraud over several decades of operating in the state.

Alleged scams include exaggerating the value of real estate such as golf courses and hotels in order to get more favorable loans and better tax rates.

Meanwhile, the criminal investigation is being led by Manhattan District Attorney Alvin Bragg. He is looking at the same issue related to operations in New York City.

The former president and his lawyers insisted that the company was not operating illegally.

He accused James, a Democrat, of using the inquiry as political revenge.

Trump cites earlier remarks by the attorney, made by her before she was elected attorney general, when James vowed to sue and make Trump an “illegitimate president”.

Trump, when called for testimony in the civil investigation, declined to answer questions and only confirmed his name.

James filed a fraud suit in September that could – in theory – cause the family business to cease to exist in its current form.

James said the former chairman, his three eldest children and two company executives committed various acts of fraud between 2011 and 2021.

The suit alleges that the family inflated their net worth by billions of dollars.

The prosecutor wants to recover US$ 250 million (about R$ 1.3 billion), which was allegedly obtained by the company through fraudulent means.

It is also calling for various punishments on the family, such as banning Trump and his children from holding leadership roles in any New York business.

This criminal investigation has been smoother so far. James, however, forwarded his findings to federal prosecutors, which could lead to the opening of a new investigation.

3 – Invasion of the Capitol

On this day, a crowd of Trumpist supporters invaded the US Congress building to prevent the confirmation of the electoral victory of the current president, Joe Biden.

The case is under scrutiny by various agencies of the federal government.

Most notorious has been a congressional committee that is reviewing Trump’s actions.

Televised hearings are showing that Trump’s false allegations of election fraud led directly to the riot.

Another is the Justice Department’s criminal investigation that points to attempts to overturn the election – but this is largely shrouded in secrecy. It’s the biggest police investigation in US history, but it’s unclear how much of a target Trump is.

He denied responsibility for the riot and criticized the Congressional committee, which he described as a “pseudo-committee” and a “kangaroo court” (a term used in the US to describe an informal court, a group of people who use false arguments to allegedly incriminate somebody).

The congressional committee – made up of seven Democrats and two Republicans – has no power to prosecute the former president, but it did vote to subpoena Trump.

That means he is legally obligated to testify in Congress, but Trump is expected to defy the subpoena and not appear for the hearing, which will likely lead to a lengthy court battle.

The committee is also considering whether to make a criminal reference recommending that the Justice Department prosecute Trump. That doesn’t mean much in practice – but it can add to the pressure on investigators.

The Justice Department’s criminal investigation has already led to the prosecution of hundreds of people who stormed the Capitol.

The former president was not questioned in this inquiry, but that remains a possibility. In theory, he could also be charged if investigators believe there is sufficient evidence of wrongdoing.

Georgia state prosecutors are investigating alleged attempts to overturn the result of the 2020 presidential election.

The criminal investigation opened after the release of an hour-long phone call between the former president and the state’s top election official on January 2, 2021.

“I just want to find 11,780 votes,” Trump said during the call to Republican Secretary of State Brad Raffensperger – a reference to the number of ballots needed to guarantee the Republican victory in a decisive state in the election.

He described the investigation – like many others – as a “witch hunt”.

Trump also attacked the official leading the inquiry – Fulton County Chief Prosecutor Fani Willis. He said Willis is a “young, ambitious, radical left Democrat who is presiding over one of the most criminal and corrupt places”.

She added that a decision on the charges was not imminent, but said Trump could be called to testify soon.

It is not known if the former president is being investigated directly, but that some of his allies are part of the investigation.

One of the targets is his former personal attorney Rudy Giuliani (former mayor of New York), who led court actions to challenge the election result. Giuliani’s lawyers said he had committed no wrongdoing in the state.

For a criminal conviction, however, prosecutors must prove, beyond a reasonable doubt, that those involved knew their actions were fraudulent.