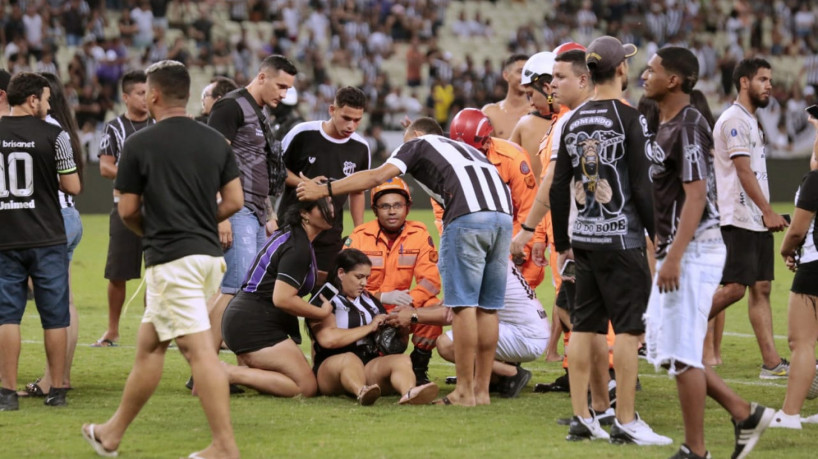 Ceará draws with Cuiabá; game is ended by fight and field invasion

In a match marked by great confusion in the stands, Ceará only tied with Cuiabá at Arena Castelão by 1 to 1, this Sunday afternoon, 16, for the 32nd round of the Brasileirão. The duel was ended after part of the Alvinegro crowd invaded the lawn and created a general fight. In addition, chairs were thrown in the direction of the field.

Because it was a duel surrounded by tension for both sides due to the fight against relegation, the beginning of the game ended up being more balanced. The two teams studied each other in the field and, as a result, created little.

The first goal opportunity came in the eighth minute, on the Ceará side, but without causing danger to Cuiabá’s goal. Nino Paraíba made a great move on the right side, went to the bottom line and crossed at the second post, where Mendoza was. The Colombian won by the top, but headed far from the goal.

After this initial chance, the scenario of little creativity of the two teams took over again. Therefore, only in the 20th minute, Ceará managed to reach the attack again with danger. Mendoza received in the back of the opposing defense and scored, but, for being offside, the referee annulled the goal of Alvinegro.

The invalidated goal made the Porangabuçu team wake up. After the bid, Lucho González’s team increased the pressure on Cuiabá and created good chances to score. The first of them was at 26, with Lima, who already inside the area tried to hit the left angle of João Carlos, but the ball went out.

Cuiabá even tried to take danger in an isolated attack, with Marcão. However, midfielder Richard was attentive to the move and managed to deflect the opponent’s submission, already inside the penalty area.

In the 44th minute, the Ceará fan was close to shouting a goal. That’s because, Lima received the ball on the right and crossed to the middle of the area. However, in the middle of the way the ball deflected on the opposing defender and almost died inside the Cuiabá goal. Goalkeeper João Carlos managed to recover and defended with an exchanged hand.

The second half started with a scare for the Ceará fans. After three minutes, Cuiabá opened the scoring with Deyverson, but the striker was in an irregular position and the goal was also disallowed by VAR.

Two minutes later, Alvinegro had one more player on the field. Left-back Igor Cariús fouled Nino Paraíba hard on the right side and the referee gave the defender a second yellow card.

After the expulsion of the left-back from Dourado, Ceará started to put even more pressure on the opposing team. In the 11th minute, Richardson created a good opportunity in individual play. The steering wheel risked from a long distance and the ball passed over João Carlos’ post.

To launch the team further into the attack, Lucho González promoted the entries of Vina and Cléber in the 15th minute. The two athletes gave more volume to Alvinegro’s offensive sector and goal opportunities began to appear more frequently.

In two attacks, around the 20th minute, Cléber and Richard, both from Ceará, were tackled inside the area during the finishing move, but the referee did not score. VAR still analyzed the bid, but confirmed the field decision.

Striker Cléber had another great opportunity to open the scoring in the 30th minute. After a hit inside the area, the ball was left at the feet of the striker, who kicked with the tip of his boot. Goalkeeper João Carlos did a miracle and saved the ball in the corner.

Ceará’s pressure remained strong in the second half. At 32, it was Mendoza’s turn to get close to scoring. The Colombian made a good move, left the marker behind, and finished strong. The ball exploded on the crossbar. On the rebound, Cléber lost with an open goal.

After the countless missed chances, Ceará was punished at Arena Castelão. After Richardson failed, forward Deyverson dominated the ball alone in the middle, dribbled the goalkeeper João Ricardo, and left the ball in the back of the net. The goal was scored in the 38th minute of the second half.

Ceará was brave and managed to get the tie already in the extra time, with Jô, at 47. After a great dispute inside the area, the center forward pushed the ball to the back of the net and left everything the same.

However, after the tie, the game could not be continued due to a great confusion in the stands. Part of the alvinegra crowd invaded the lawn and ran towards the players, who needed to protect themselves inside the locker rooms. In addition, numerous chairs were broken and thrown onto the field.

See the updated classification of the Brazilian Championship

Previous The perfect movie for a Sunday night at home just arrived on Netflix
Next Galaxy Watch: Which Samsung Watches Have Drop Detection and SOS?