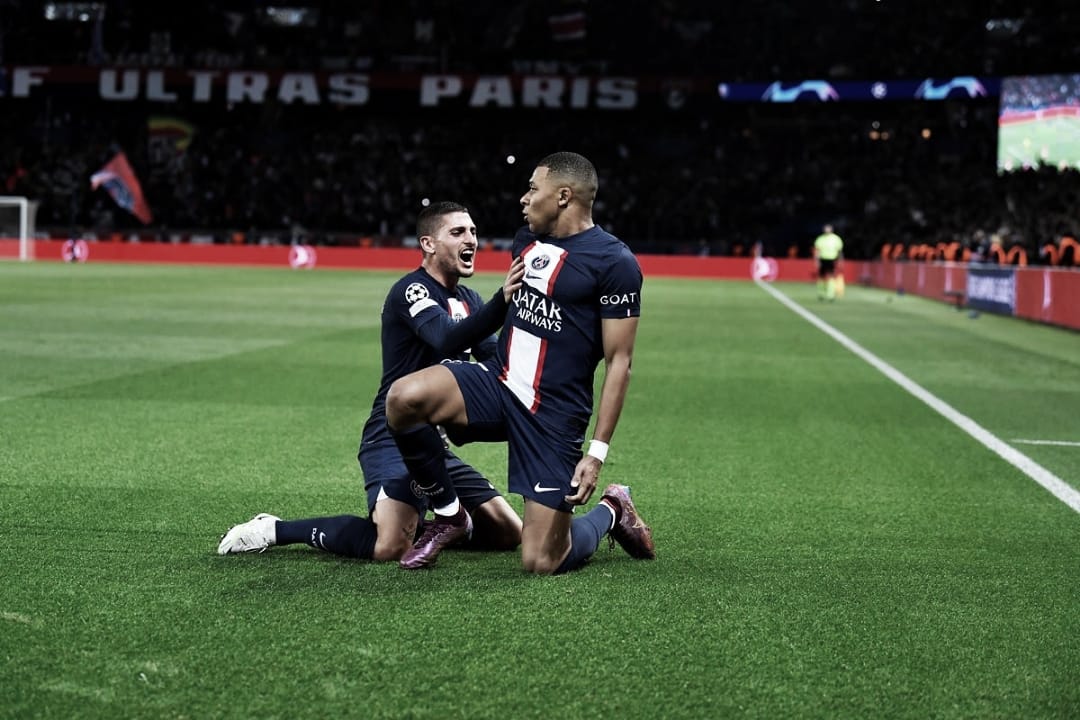 Mbappe received a pass inside the area and finished, but without danger.

Mbappe found Verratti and the Italian hit the goal. Pau Lopez held on without problems.

Mbemba tried the bicycle inside the area, but without danger to PSG’s goal.

Alexis Sánchez received a pass and hit. Donnarumma made a good save.

Vitinha stole the ball in midfield and Mbappe kept it. The Frenchman dominated, faced the marking and found Neymar in the middle, who finished with the first shot in the left corner of goalkeeper Pau Lopez. The ball still hit the post before dying in the back of the goal.

Messi pulled the counterattack through the middle and activated Mbappe on the left, who finished with the first shot looking for the angle. The ball went too high.

Veretour finished from afar, but the ball went too high.

Messi took a free-kick from the edge of the area and the ball exploded on the crossbar.

Nuno Tavares released a rocket with his right foot. Donnarumma sent it to a corner.

Nuno Tavares made a good play on the left, entered the area and hit a cross, but without danger.

In a counterattack with speed, Harit received in the middle and finished, but without strength for the defense of Donnarumma.

Neymar took a free-kick in the area and the defense cleared it.

In a counterattack with speed, Messi found Neymar, who sent it to Mbappe inside the area on the left. The Frenchman finished first in the right corner and Pau Lopez performed a miracle.

Clauss advanced on the right, entered the area and crossed low. Alexis Sánchez arrived late on the ball.

Rongier crossed on the right and Guendouzi finished with the first shot, without danger to PSG’s goal.

Marseille starts to leave more of the defensive field.

PSG started the game on pressure.

Neymar launched Mbappe down the left, who dominated and found Hakimi alone inside the area. The side fixed it and finished on top of Pau Lopez. What a chance PSG missed.

Bailly fumbled and Messi got the ball. The Argentine took it inside the area and finished in the left corner, but Pau Lopez made a good save.

When is the PSG vs Olympique de Marseille match and how to follow LIVE?

How and where to watch PSG vs Olympique de Marseille live

In addition to real time here at VAVEL Brasil, the match between PSG vs Olympique de Marseille will be broadcast live on Star+.

How does PSG arrive?

PSG remain undefeated this season. In the last game, they drew in Paris with Benfica for the Champions League and missed the chance to take the isolated leadership of the group. Neymar and co.’s team has been unbeaten for 28 games, a mark that has generated excitement among the club’s fans.

In the last 20 games in the derby, PSG have a wide advantage. The Paris team won 16 matches, while Olympique de Marseille only won one, while there were three draws.

How does Olympique de Marseille arrive?

Olympique de Marseille beat Sporting in the last game, in a clash valid for the Champions League. But, the team lost to Ajaccio in the last game of Ligue 1 and dropped to fourth place, where they played point-to-point with the leaders PSG.

Previous Belarus awaits the arrival of 9,000 Russian troops in the country – News
Next Find out who is actress Elle Fanning