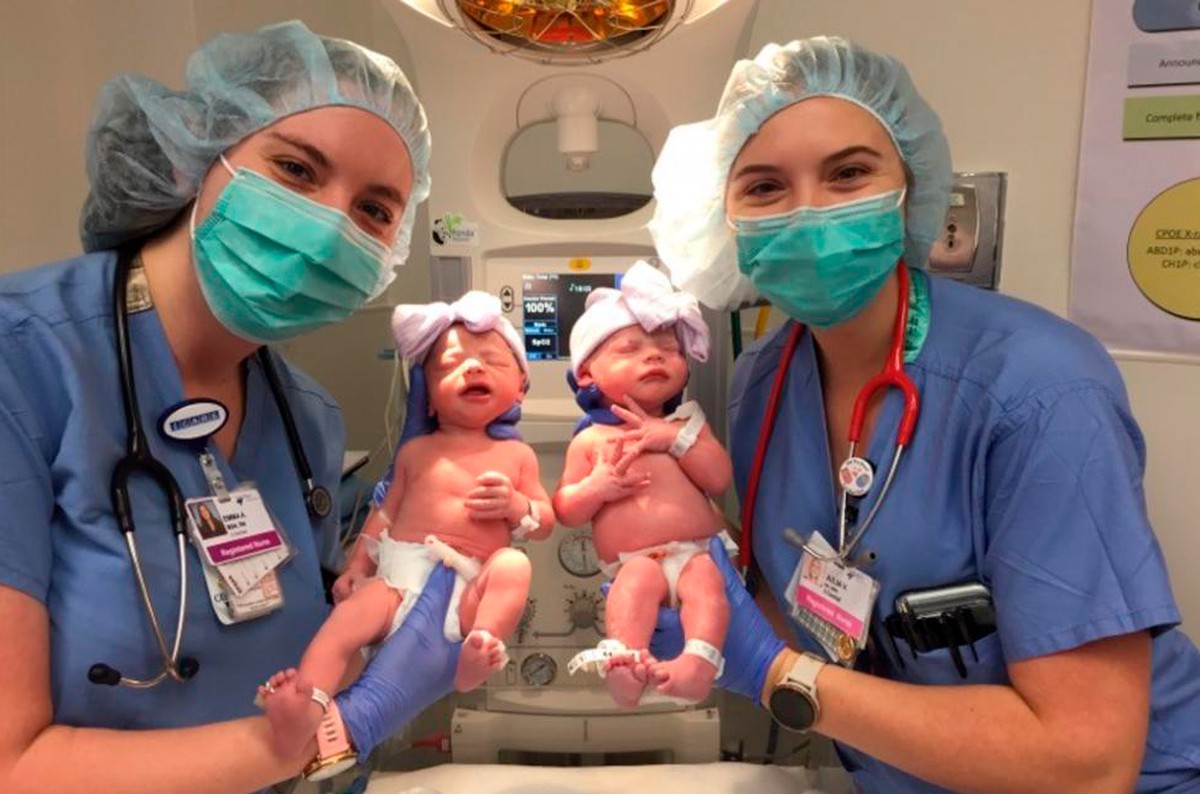 When giving birth to twins, mother discovers that nurses have the same name as her babies | baby names

A mother from Denver, Colorado, USA, discovered a sweet coincidence giving birth to twins in early October. As with many cases of twins, the little ones decided to come into the world earlier than expected and Lauren Meehan, who was already a mother of a child, rushed to Rose Medical Center in the middle of the night.

Nurses Emma and Julia, with twins who were given the same names — Photo: Reproduction/Rose Medical Center

Arriving there, Lauren was taken to an operating room and, due to the risk related to the twin birth, she was attended by a large team, made up of doctors and nurses. “Although I knew why everyone had to move quickly, I always had a nurse by my side explaining everything and holding my hand,” the mother told the website. Today Parents.

At one point in the delivery, when the specialists were about to bring the two girls into the world, one of the medical staff asked what names Lauren had in mind for her daughters. “We told the room that we loved the names Emma and Julia,” the mother said. At the answer, everyone burst into laughter. That’s because the two nurses who were assigned to take care of the babies were exactly named Emma and Julia – one of them even made a record with the newborn, proving the amusing coincidence.

“Even with all the chaos, we were able to stop for a second and enjoy this moment, knowing these names were meant to be,” Lauren revealed. “These two nurses will always be special to us and the whole team that took care of us that day will have a special place in our hearts. It will be a funny story to tell our girls!”, concluded the mother.

Twins Emma and Julia, who were born in early October, in the United States — Photo: Reproduction/Rose Medical Center

Emma: very popular in the USA, it comes from the Germanic Emma, ​​Imma, and means “whole”, “universal”. In Brazil, it is a name that is rarely used — only 810 people are registered in this way, according to the 2010 IBGE Census. Some famous are actresses Emma Watson, Emma Stone and Emma Roberts.

Julia: feminine of Julius. It comes from the Latin Julius, the name of an important family in Ancient Rome, which claimed to be a descendant of Jupiter, the supreme god in Roman mythology. It is one of the most popular names in Brazilian lands, with the highest number of registrations since the 2000s. Altogether, there are more than 430,000 Brazilian women with this name.

Want to know more about baby names? Access our tool!