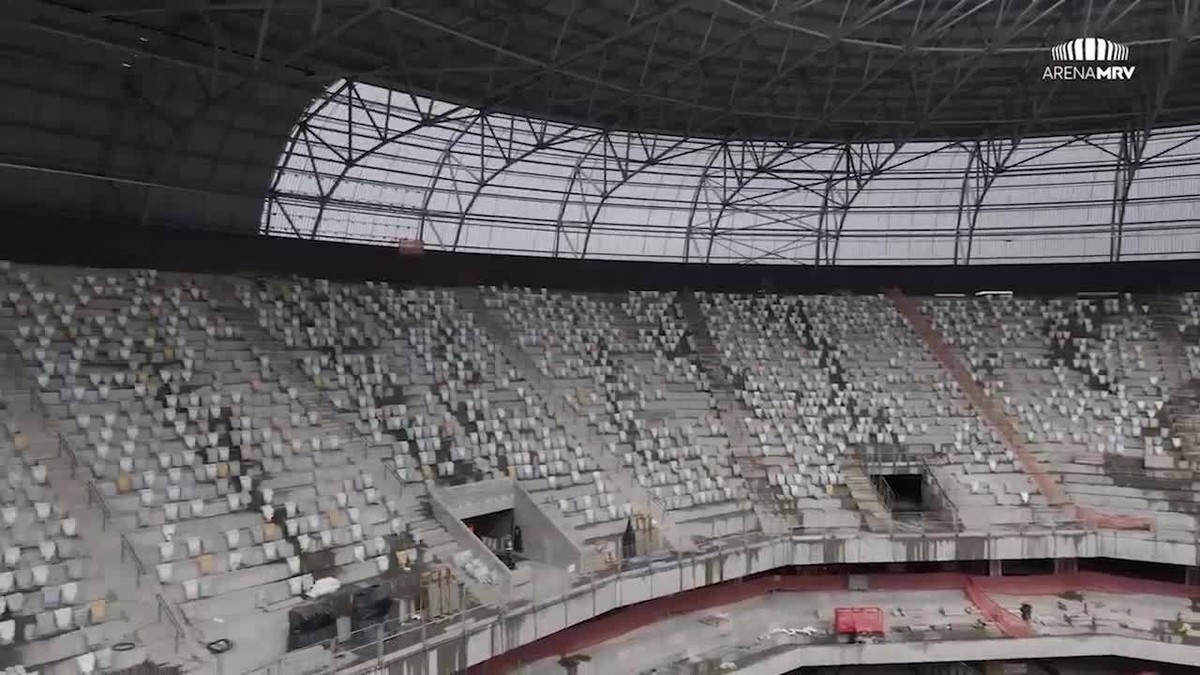 Atlético-MG Stadium reaches 30% of the field installation and 90% of the coverage; see images of the work | athletic-mg

At one end of the MRV Arena, two groups of nine workers hang from ropes to install the gray/white roof of the future Atlético-MG stadium. A journey of up to six hours defying gravity and under the scorching sun. Casa do Galo is in the final stretch of construction. The coverage is 90% complete, and the lawn has already had 30% of the planting process carried out. 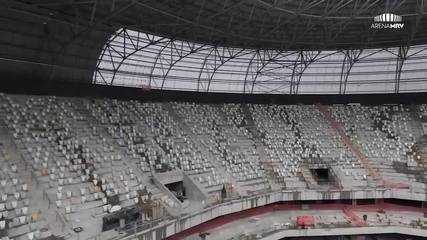 The ge made a “tour” of the future home of Galo last Friday and went around the stadium from end to end.

In an initial forecast, October 2022 would be the month of completion of the internal part of the work. She is at almost 86% completion. Arena MRV will arrive in January 2023 100% complete. Of course, the adjacent works will be lacking, mainly the road, which will provide access for 46,000 fans to the venue, on a full day.

– We are exceeding 85% of the physical progress of the work with some important milestones in the last few days. We already have the covering 90% completed and the work on the lawn has advanced. Each stage we win is to be celebrated, because there are many challenges in each one of them – says Carlos Antônio Pinheiro, engineering director of Arena MRV and Galo.

Whoever arrives at the construction site in the California neighborhood is first faced with the stadium’s “marquise” scratching the sky of Belo Horizonte. And, later, with one of the lanes of the Via Expressa that connects BH to Contagem, with trucks, tractors and steam road works.

There are 1,100 workers daily at the MRV Arena works. There were already 3 thousand involved in the construction. Currently, masonry work, painting the walls, electrical and hydraulic installations, fire fighting and finishing work are carried out.

The works started in April 2020. And the official opening of the arena will be in March 2023. Almost three years of works of a giant. There are 46,000 capacity, 2,300 parking spaces and a total of nine floors.

The “tour” begins at one of the entrances to the esplanade, on Rua Cristina Maria de Assis, 202, right next to a bar owned by actor and athletican Daniel de Oliveira. A few meters (and several work points) to the entrance to the MRV Arena, on level 1, where most of the captive chairs will be. The distance from the first stretch of bleachers to the field is only 8.5 meters.

There are great chances that one of the sectors behind the goal, destined for the organized teams of Galo, will run out of chairs. But everything depends on the approval of the Fire Department and Military Police.

On the intermediate level (2) are the cabins, which will practically surround the entire second floor, with two “lounges” areas at the ends of the goal facing the Expressway. The report was in a central box, which, it seems, will be used by the Galo board.

At level 3, the highest, there are already the divisions for the visiting fans (4,600 seats), and the beginning of the construction of the press stand. There will be 104 positions in the press stand, for newspapers, radios, websites and other professionals, in addition to eight radio booths and 3 TV booths.

The screens at both ends (back rows) will still be housed, but space is reserved. Impressive dimensions: 144 square meters. It is just a technology point of Arena MRV, which invested R$ 100 million in this aspect. The idea, for example, is to create a large Wi-Fi network for fans to access, and simply be a stadium where cash will not circulate. Everything will be purchased through its own app.

The MRV Arena’s lawn, which will have official FIFA measures – 105 x 68m -, has already had the drainage part installed. Now it is in the irrigation system phase. The mat has a slight slope shape for almost imperceptible water flow. It will be 100% natural grass.

The first official event of the stadium, on March 25, 2023, will be precisely the official marking of the field, installation of the goalposts, the first shot on goal and a Show with Orquestra Ouro Preto. The events known as “BH Festival” will be attended gradually, from 10 thousand people, in the process of testing the equipment.

17,000 chairs have already been installed. The idea was for the seats to be black, but to avoid causing excessive heat to the fan, the color was changed. The MRV Arena chairs will be gray (two tone), white and yellow, with a few units in black.

The “holes” of the benches at the MRV Arena — Photo: Fred Ribeiro

But the idea of ​​ultra connectivity is not just in the virtual part. The future home of Atlético also thought about the accessibility of fans. Those with limited mobility will be able to access all levels of bleachers, and be able to watch the games without a barrier. There are three large ramps that connect level 1 with levels 2 and 3.

The “floors” of the arena even had the naming rights sold to ArcelorMittal, Brahma and Banco Inter. Rafael Menin, president of MRV Engenharia, and member of the collegiate body, even informed that the expectation is to raise R$ 17 million from this commercialization of names – including MRV itself. It fits more. The parking lot – operated by Estapar – is already in an advanced process, with marking of spaces and painting of the pilasters. There are four levels in basements, which will have direct connection with the road part.

One of the access ramps to the three levels of the MRV Arena — Photo: Fred Ribeiro

One of the concerns in the Arena MRV budget is the counterparts. The work has a maximum price guaranteed with Racional Engenharia, responsible for the construction – at R$ 620 million. Another R$ 100 million worth of technology. The cost closes at around R$ 950 million. The counterparts are in the region of R$ 150 million.

The counterparts, demands from the government to release the Installation License (beginning of the works), and the Operation License (for the stadium to open its doors), are divided into two types: the roads, which promise to finish in March, and the social.

The social ones are the facilities of an Integrated Language Center, Health and Family Assistance Center and a City Academy. These rooms will be on the Esplanade, where the ticket office for Atlético’s fans will be, in addition to the headquarters of Instituto Galo (which is a counterpart).

Place where social rooms for the public authorities will be built at the MRV Arena — Photo: Fred Ribeiro

On top of the building under construction, to be delivered entirely to the City Hall of Belo Horizonte, will be what is called “TV Compound“, where the trucks for broadcasting games by television stations will be parked. The idea is to make the same location the parking lot for the press in general, and, naturally, access to accreditation.

Also in terms of social contributions, Arena MRV will be responsible for creating a linear park (access conditions) in Mata dos Morcegos, and maintaining it for 30 years. There is also the creation of a community center for the residents of Cabana do Pai Tomás, and the renovation of the Basic Health Unit in the California neighborhood. There is also land tenure regularization in a conservation area in the Serra da Gandarela National Park.

The land where the MRV Arena was built was a Permanent Preservation Area. The project managed to obtain “public utility” status from the State Government, and suppress part of the local vegetation. There is a preserved and untouched area, attached to the stadium, called RPE (Reserva Particular Ecológica), whose forest does not yet have a symbolic name.

Ecological Reserve next to the MRV Arena — Photo: Fred Ribeiro

Finally, Arena MRV committed to the PBH environmental department to plant 46,000 tree seedlings in points in Belo Horizonte. It will represent a tree for each seat of the future stadium. Planting will be completed in 10 years.

In a robust project, which began on the horizon of Atlético at the end of 2014, there are still undefined points. The idea is to move Galo’s administrative headquarters to the future house, in the entrance hall, and vacate the Lourdes building to be explored.

Atlético also has in mind the installation of the museum in the arena, and there is a room with 1,600 m² in the area of ​​the box designed for such a space. There is no shortage of history for the club, which will celebrate its 115th anniversary with the official opening of the MRV Arena.

Street on which the Atlético bus will arrive — Photo: Fred Ribeiro

Previous Check out information about the release of the movie ‘Snow White’
Next Russia attacks Kiev with kamikaze drones; hundreds of cities are without electricity – 10/17/2022