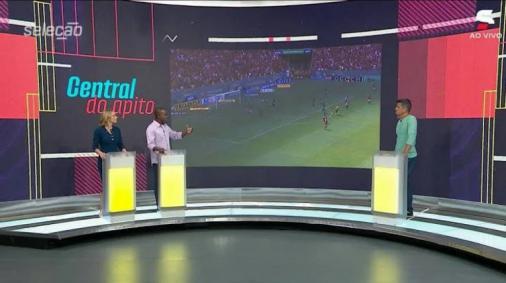 On his Instagram profile, Mazzeo directed numerous criticisms to PC Oliveira, who was present in the broadcast of the duel between Sport and Vasco, for Série Bwhich was marked by general confusion at the end of the match.

– He was a bad referee, always with bad intentions. One day he was a monkey in São Januário and from then on he started to hate Vasco (who he used to only harm). Today he is a commentator for Globo and continues to hate Vasco. But now he can no longer harm, so he just talks shit-wrote the artist on Instagram.

Following the stories, Mazzeo contextualized his criticism of PC Oliveira and also commented on the lines said by the broadcaster’s commentators during the confusion on Ilha do Retiro.

– Globo commentators are outraged at Vasco’s player because of the celebration of a goal. They are not at all outraged by the invasion of the field and the attempted aggression. Right, Paulo Cesar de Oliveira and Roger Flores? This (Roger) then, a super disciplined ex-player. Values ​​- mocked.

+ André Rizek criticizes scenes of violence on Ilha do Retiro and demands punishments: ‘Jail for the aggressors’

Vasco managed to pull off a heroic draw this Sunday, against Sport, in Ilha do Retiro, for Serie B. Raniel converted the penalty in the last minutes and went to celebrate the goal in front of the home crowd, starting a general confusion.

The red-black crowd even invaded the field and tried to attack the athletes of the Rio de Janeiro team. The police arrived in time and contained the invaders. Despite that, regrettably, a firefighter was attacked while she was helping fans.

The Vasco residents felt cornered and ran into the locker room. In addition, they decided not to return to the field. However, they would return if they had guarantees that they would have 100% security for the ball to roll again.

The game was stopped for almost an hour. After a lot of conversation between the managers, referees and the local military police, the referee Raphael Claus called responsibility and ordered the end of the match, due to lack of security. With that, Claus confirmed Vasco’s decision.