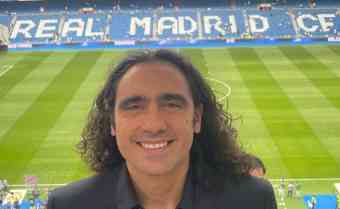 Cruzeiro idol, Sorn thanks Ronaldo for taking back elite club

Cruzeiro’s idol, former full-back Juan Pablo Sorn thanked Ronaldo Fenmeno for bringing the heavenly club back to the elite of Brazilian football. The dialogue took place before the broadcast of the Spanish classic between Real Madrid and Barcelona, ​​played this Sunday (10/16), at the Santiago Bernabu Stadium, in Madrid.

Today commentator of DAZN, Sorn interviewed Fox’s manager before departure. “Hello, Ronaldo Fenmeno. First of all, thank you as a player and supporter of Cruzeiro for taking Cruzeiro back to the elite. A giant that returns. I want to thank you and give you a hug”, he emphasized.

Ronaldo thanked Sorn. The majority partner of SAF do Cruzeiro spoke about some of what he has been doing at the celestial club and highlighted: “We still have a lot of work to do.”

“Thank you, Juampi. It’s a pleasure to talk to you, friend. You know Cruzeiro and its fans very well and you must understand what happened in the last three years. In December of last year, I had the opportunity to take the risk of buying Cruzeiro – and the truth that I did not doubt. And he was very clear about things as they should be”, he recalled.

“The sporting part turned out phenomenally. But we still have a lot of work to do. We’re moving forward, but we’ve already taken a very important step that is moving up to the first division,” he added.

In turn, Sorn defended Fox in three spells (between 2000 and 2009), with 18 goals in 121 official games. Today, the former player is a declared supporter of Cruzeiro and continues to accompany the celestial club.