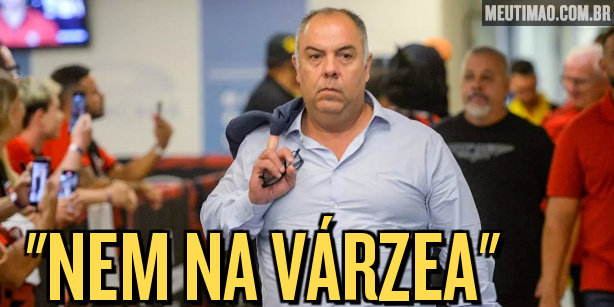 Corinthians had the game against Goiás postponed this Saturday after the Corinthians fans vetoed the visiting sector of the stadium. Opponent of the final of the Copa do Brasil, the vice president of football at Flamengo, Marcos Braz, complained about the situation and also contested “pressure” made in the arbitration.

“Again I’m going to be boring about this. Not in the floodplain. In the floodplain you know whether or not there will be the game four or three hours before. Simply, in a league as important as ours, the game didn’t happen overnight. Who took the game today was the STJD. I think it’s not plausible. I didn’t quite understand why. It’s a shame”, said the vice president of football in an interview in the mixed zone of Maracanã after the game against Atlético-MG.

Corinthians ended up without playing between the two games of the Copa do Brasil final after the match was postponed. The cast returned to the CT for training this Sunday and normal programming starting Monday.

This week, the club sent a letter to CBF to complain about the refereeing of the first game, after controversy over the unmarked penalty committed by Léo Pereira, from Flamengo. The federation recognized a VAR error and the director of the Rio de Janeiro club did not approve of the situation.

“The pressure that Corinthians makes is not on Flamengo, it is on the bodies that make the competition. There is no problem between one board and another. It is a specific situation, which is still serious due to the importance of game. We are playing for a national title. There is concern that the refereeing trio will come here highly pressured and fearful. I trust the CBF and, much more, the president of arbitration“, he finished.

Corinthians and Flamengo enter the field this Wednesday, in a duel scheduled for 21:45, in a game that is worth the title of the Copa do Brasil. Any tie in the score sends the game to penalties, while any win gives the trophy to the winner.

See more at: Corinthians x Flamengo and Copa do Brasil.