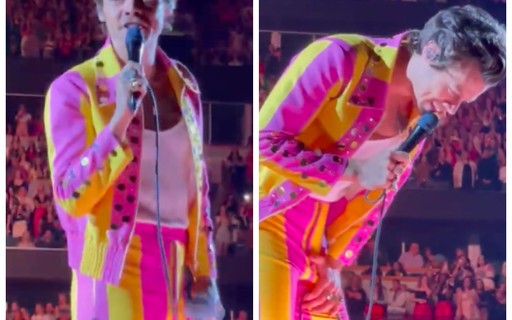 Musician Harry Styles had to bend over and catch his breath after being hit in his private parts by a bottle during a concert in the city of Chicago. The video of the incident went viral on social media (watch at the end of the text).

“Now, that was a shame,” Styles said, hunched over, as he faced the pain of the “attack.”

The show in which the incident took place was at Chicago’s United Center arena. Styles was talking to the audience at the show about the weather in the city when he was hit by the bottle. “Never mind,” Styles said, amid laughter, after swinging his legs and returning to the center of the stage.

Afterwards, the singer joked about what happened, tuning his voice, as a possible “side effect” of the accident involving his private parts.

Styles is currently in a relationship with actress Olivia Wilde. He was directed by her in the period drama, ‘Don’t Worry Honey’ (2022).

Accidents involving musicians and bottles are not uncommon. The Brazilian Carlinhos Brown was bottled during his performance at Rock in Rio 2001, before the Guns N’ Roses show. He later called the attack an act of racism.

Watch below what happened involving Harry Styles at the show in Chicago: