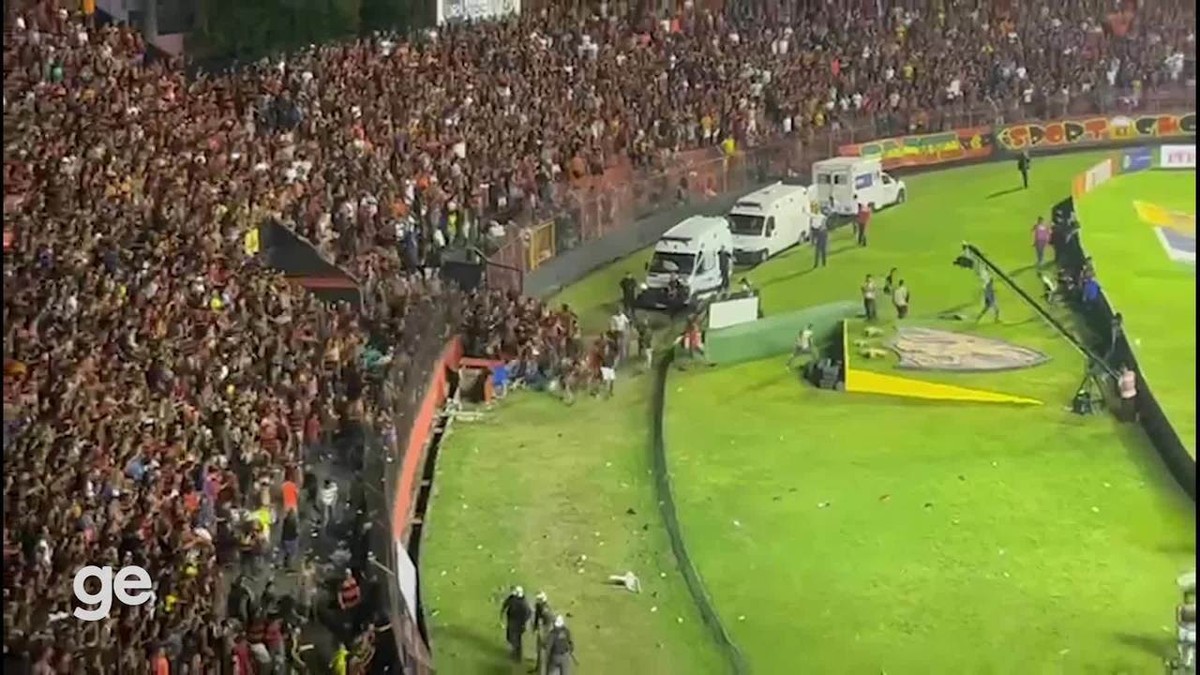 Referee Raphael Claus released the summary of the duel between Sport x Vasco, which ended early after invasion of the field by the red-black crowd. The game at Ilha do Retiro took place until the 48th minute of the second half, when Raniel scored, but ended up ending – in a 1-1 draw – after more than 50 minutes of stoppage. The referee reported the confusion and confirmed the expulsion of Vasco Raniel and Luiz Henrique players.

– During the celebration of the goal of the Vasco da Gama team, close to the Sport fans, many objects were thrown onto the field of play towards the players, including stones, flip-flops, sneakers, lighters and glasses with liquid. At that moment, Sport fans burst the gate behind the goal where the Sport team was defending, and an invasion of many fans begins, not only through the gate, but also at other points in the stands. I inform you that they assaulted visiting players, who immediately ran to their locker room, a gentleman and a lady civil firefighters who were working near the gate, and they continued to be assaulted after the lady was already down and you were trying to protect her. After observing all these occurrences, seeing many fans being attended to inside the field of play and because we felt a lack of security, we headed to the referee’s locker room, where I met with the managers, Augusto Carreras, from Sport, and Paulo Bracks, from Vasco, coaches Claudinei Oliveira, from Sport, and Jorge de Amorim Campos, from Vasco, and military police lieutenant colonel Washington Souza, announcing the end of the match for not feeling safe regarding my physical integrity and that of the other professionals involved in the game, in addition to the totally impossible environment for the practice of the sport of soccer, the match was ended. I also inform you that the announcement took place approximately 45 minutes after the game was stopped – reported Raphael Claus.

The referee reported that Raniel received two yellow cards, and the consequent red, after the penalty goal that tied the game. The first card for having taken off his shirt in celebration, and the second warning for “provoking the opposing fans in the celebration of a goal”. The reserve midfielder Luiz Henrique, in turn, took the direct red card for violent conduct of “throwing a tennis towards the home team’s fans in an aggressive way”.

Sport beat Vasco 1-0 at Ilha do Retiro until a penalty was awarded to Cruz-Maltino, after VAR intervention, successfully converted by Raniel to tie the score at 1-1, in the 49th minute of the second half. The player celebrated in front of the grandstand of the headquarters, sector where members of organized Sport usually stay.

After the provocation, objects were thrown towards the players of the Rio team, who quickly ran to the changing rooms when part of the crowd managed to break down one of the access gates of the stands to the field.

+ Vasco’s football director reports tension on Ilha do Retiro: “We are stuck in the locker room”

Juliana Martins, a firefighter who was providing services in the game, was even kicked by a red-black fan. A fellow employee, Diego Correia was also at the scene, he tried to contain the invaders, but received a punch in the face. Both provided a report to the Civil Police.

A mess – far from over, let’s say – full of pinpricks. Mainly by Claudinei Oliveira, coach of Sport. The red-black commander mocked the statement by Jorginho, Vasco’s coach, by claiming lack of security on Ilha do Retiro to finish the remaining eight minutes of the game.

“He said it’s not worth playing because he’s a grandfather, what’s worth is life. Of course, the result matters to him”, he said.

Raniel’s stance, in addition to the penalty scored in favor of Vasco, did not go unnoticed by Claudinei. The leonine coach treated the provocative celebration of the striker Cruzmaltino as the trigger for the invasion of Ilha do Retiro, and fired: “Crime pays”.

– No one is sure what the crowd did, now what caused it was a Vasco athlete who is being benefited to play 4 minutes less and take the tie. So crime pays. If, hypothetically, I win the game that will give me access, I make a mess, provoke the opposing crowd, they invade the field and the game is over. It makes no sense,” he said.