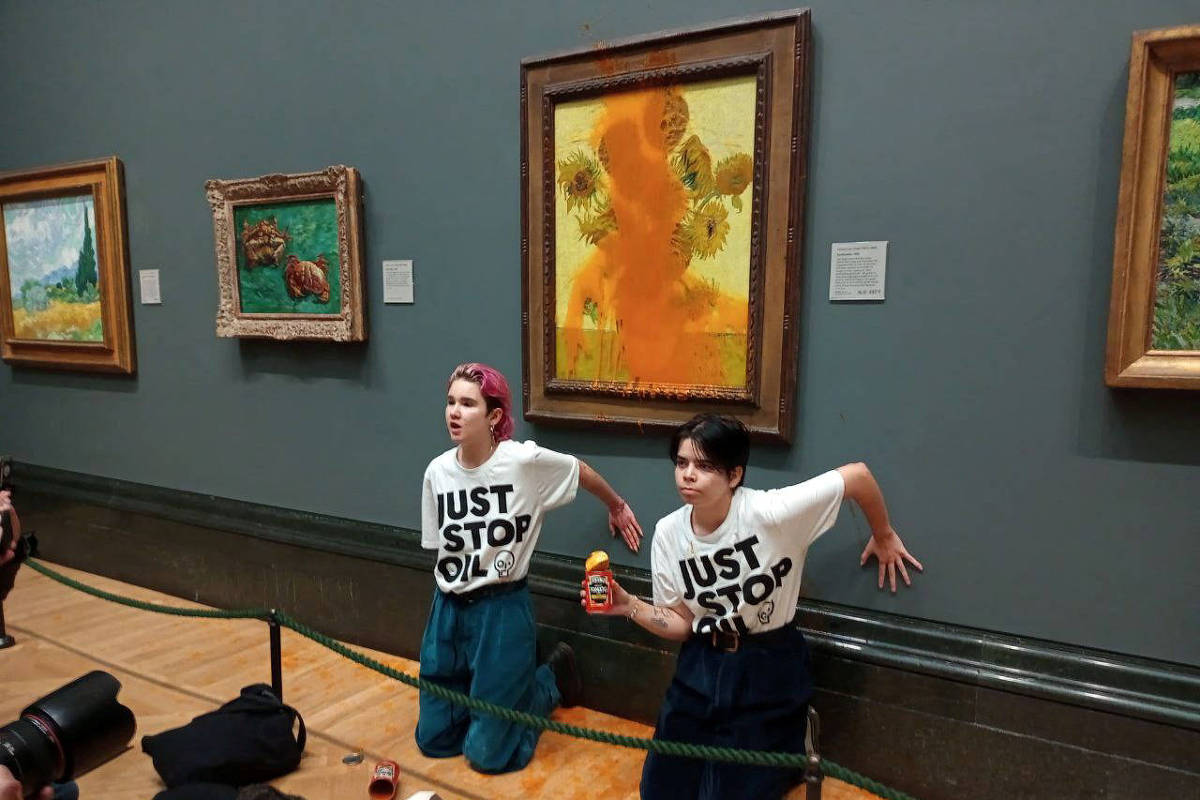 The UK government will this week introduce a bill that seeks to extend penalties for activists who cause unrest in the population. The information comes from the British Home Secretary, Suella Braverman, and follows a series of protests by environmental defenders in the country.

The most recent demonstration took place last Friday (14), when two activists from the Just Stop Oil group threw a can of tomato soup at the Sunflowers painting, one of the main works of the Dutch painter Vincent Van Gogh. The protest took place at the National Gallery, in London, and sought to pressure the British government to decree an end to the use of fossil fuels.

“Are you more concerned with protecting a painting or protecting our planet?” shouted one of the women at the time.

The plan, however, may have backfired. That’s because, on Saturday (15), Braverman signed an article in the Daily Mail, accusing the activists of “thugs and vandals” who use “guerrilla tactics”. “Who do you think you are?” he asked. In the text, she also announced that she would send a bill to Parliament that gives more powers to police officers to stop protests that cause disturbance to the local community.

According to Braverman, if passed, the new legislation would allow law enforcement officers to stop and search suspected organizers of protests like Friday’s. British media reported that more than 350 Just Stop Oil protesters were arrested in October.

Also in the last week activists have spilled gallons of milk on the floors of several major London supermarkets such as Harrods, Wholes Foods and Waitrose. They condemned the dairy industry and urged chains and customers to stock only plant-based foods and beverages.

In the article, the minister also cited the example of activists who glue themselves –literally– to traffic lanes to draw attention to environmental causes. “A small number of people can cause traffic jams,” Braverman said, describing the actions of protesters blocking roads as “monstrously selfish.”

Some such protests, by the way, were criticized by part of the British population. Last week, for example, a man was trying to take his sick wife to hospital, while around 30 activists blocked a major London thoroughfare. The same thing happened when a woman took her disabled child to school.

Also on Saturday, Braverman published a series of tweets condemning such protests and arguing that the demonstrations do not advance activists’ causes or influence public debate. “Their disruptive behaviors prevent decent people from continuing their daily lives,” he wrote.

According to the minister, just two police operations to deal with protests by the Extinction Rebellion, a major environmental organization, cost British coffers 37 million pounds (R$ 221 million), double what would be allocated annually to the task force to fight crimes. violent. At the same time, she pointed out that such demonstrations have already caused the loss of 146 million pounds in a UK infrastructure project – Braverman did not detail the values.

However, popular support for the bill is uncertain. In March last year, for example, thousands of people protested in Bristol against legislation that would allow the government to impose start and end times for demonstrations and set noise limits at events. If the rules were not met, protest organizers could be fined up to 2,500 pounds (almost R$15,000).

Critics of the new bill say it has no place in a democratic society. More than 50,000 people have signed a petition calling for it to be taken down, according to The Washington Post.

Despite protests, the project was approved this year. In Saturday’s article, however, Braverman wrote that the legislation was not enough.