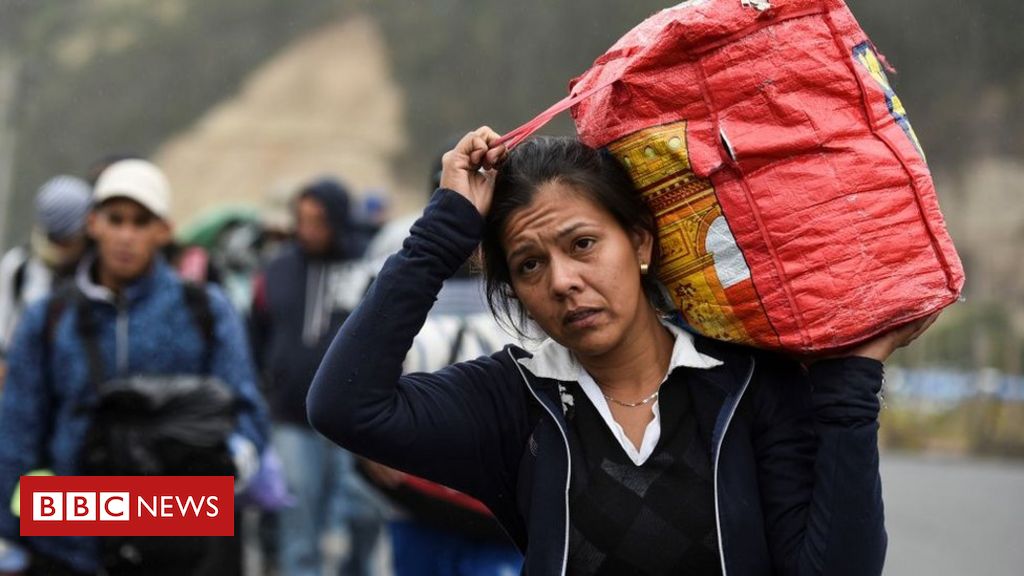 Why Venezuelans are migrating en masse to the US via Mexico

“Right boats” is an expression that became popular a few decades ago to describe Venezuelans who emigrated to the United States after Hugo Chávez took power in 1999.

That phrase no longer describes how Venezuelans enter the US, which lately is more like the so-called “wetbacks”, a term coined in the 1920s — and often used derogatorily — for refer to those who crossed the border by swimming through the Rio Grande de Mexico.

In August of this year, more Venezuelans tried to cross the border from Mexico to the United States than Guatemalans and Hondurans. Only the Mexicans themselves made more crossings.

The number of Brazilians trying to cross the Mexican border with the US dropped in the same period – there were 5,750 arrests against 9,100 a year earlier. In December of last year, under pressure from the US government, Mexico began to charge tourist visas for Brazilians.

In September, according to the US Department of Homeland Security (DHS), the number of Venezuelans detained at the southern border increased even further: 33,000.

But perhaps the data that most clearly shows how things have changed in the last two years are the following: between fiscal years 2014 and 2019, the average monthly detention of Venezuelans was 127.

In total, between fiscal year 2021 and fiscal year 2022 (which ended September 30), detentions of Venezuelans at the border increased by 293%, according to the DHS.

Faced with this situation, the government of US President Joe Biden announced this Wednesday (10/12) a new policy that provides for the expulsion to Mexico of all Venezuelans who enter the US without authorization across the border, but who, at the same time, , will grant humanitarian permission to around 24,000 of them, meeting a series of requirements.

But why are so many Venezuelans entering the United States through the southern border?

A country in crisis

Historically, Venezuelans had no tradition of emigrating.

In the 20th century, Venezuela served for decades as a place of reception for people coming, above all, from other countries in Latin America and southern Europe.

The deep crisis that Venezuela has experienced over the past seven years has completely changed this dynamic and the country has become a major emitter of migrants.

About 7.1 million Venezuelans (about 20% of the population) are currently living as migrants or refugees in different parts of the world, according to UN data from September 2022.

According to Juan Navarrete, deputy director for the refugee crisis at Amnesty International Venezuela based in Bogotá (Colombia), this figure shows that the Venezuelan migration crisis has shown no signs of abating — in August the number of refugees was 6.8 million. of people.

“The flow of people out of Venezuela continues, although perhaps not at the same rate as in the 2015-2017 period,” Navarrete tells BBC News Mundo, the BBC’s Spanish-language news service.

Julia Gellat, a senior analyst at the Migration Policy Institute, a think tank based in Washington (United States), believes that a combination of difficult economic and political conditions is forcing Venezuelans to leave the country.

In his view, some people who decided to stay in Venezuela until now were waiting for the fall of the government of Nicolás Maduro, and since that did not happen, they now believe that it is time to leave.

Venezuela emerged from a long period of hyperinflation in December 2021, but remains one of the countries with the highest inflation in the world.

Since the beginning of the migration crisis, the majority of Venezuelans who have decided to leave the country have migrated to other Latin American and Caribbean nations: around 5.96 million.

However, Navarrete explains that conditions for Venezuelans to enter and stay in the region have become more difficult in recent years.

This led to a change in the migratory trend. So now, instead of looking for routes south, Venezuelans looking for a better life abroad are looking further north.

“Just as in the north there is the Strait of Darién [uma selva muito perigosa que os migrantes que vão da Colômbia ao Panamá devem atravessar]in the south, since the coronavirus pandemic, countries in the region have started demanding visas and other documents that are difficult to obtain from Venezuelans,” he says.

The expert points out that to these difficulties are added some episodes of xenophobia that occurred in some countries such as Chile and Peru, which migrants also take into account when thinking about possible destinations.

Added to all this is the fact that, since the coronavirus pandemic, the economic situation in Latin American countries has deteriorated both for the local population and for immigrants, who have been left in an even more precarious situation.

“I think a change that has taken place recently is that economic conditions in other countries have led Venezuelans to come to the United States,” says Julia Gelatt.

US Attractiveness and ‘Migration Intelligence’

Navarrete explains that, given the deterioration of economic conditions and the increasing difficulties of going to other Latin American countries, the US may appear as a more attractive place in the minds of Venezuelan migrants.

“A Venezuelan migrant who lives begging for money on the streets of Colombia might think he can get a lot more money in the United States, where livelihoods are better. So, in their imagination, they prefer to go north rather than east, without thinking that the risks of the northern route are much greater”, he argues.

Added to this is the fact that the United States had a benevolent policy towards Venezuelan migrants, whom authorities in that country consider victims of the Maduro government, described as a “dictator” by both Biden and his predecessor, Republican Donald Trump. .

In a US Customs and Border Protection (CBP) press release released in September, it is noted that “the large number of people fleeing failed communist regimes in Venezuela, Nicaragua and Cuba is contributing to more migrants trying to cross the border.”

Around those same days, questioned by the press, President Biden himself said that it was not “rational” to return migrants to these three countries.

Until now, in practice, this position has meant that for months, when Venezuelans crossed the border into the US from Mexico, they “surrendered” to the border patrol, because they thought they would not be deported, but would simply be detained by a few days and then released pending the processing of their asylum application before an immigration judge.

This was a fundamental difference from the treatment given to migrants from many other countries expelled from the US to Mexico or deported to their countries of origin.

“Some immigrants felt that until now the United States was letting Venezuelans in and not expelling them based on Title 42 (a Trump-era rule that allows them to be returned to Mexico with the excuse of the coronavirus pandemic), as opposed to the what happens to migrants from other countries. I think this information has spread among migrant networks”, says Gellat.

Navarrete refers to this phenomenon as “migratory intelligence”: the exchange of information between migrants that, as he explains, in the case of Venezuelans, occurs a lot through social networks such as TikTok and Facebook.

According to the expert, the sum of all these elements has made the idea of ​​emigrating to the US attractive in the minds of Venezuelan migrants.

But can we expect any changes after the Biden administration announces that it will expel Venezuelans who try to enter the southern border without a visa to Mexico?

Navarrete believes that, in part, this will depend on what happens with this information and how it is treated in migrant networks, and points out that many of those who are emigrating are young people, from lower classes, who do not know the legal norms on migration.

He adds that migrant smuggling groups have found a business opportunity in Venezuelans.

Julia Gelatt, in turn, considers it possible that, although some decide to stay in Venezuela or go to other countries, there are those who insist on going to the United States.

“If people are fleeing hunger, poverty and political repression in Venezuela, it is very likely that they will make the trip anyway and can try to cross the border, even if they are no longer looking for border patrol agents to get them. allow them to enter and stay. People may still be trying to enter, but clandestinely”, he says.

“When conditions are so difficult, there will be people who have to emigrate to survive and they may still try to come to the US,” he concludes.

Previous 1.1 million satellite dishes will be distributed; see the list of cities
Next Hailey Bieber and Selena Gomez appear together in photos and remove rumors of rivalry