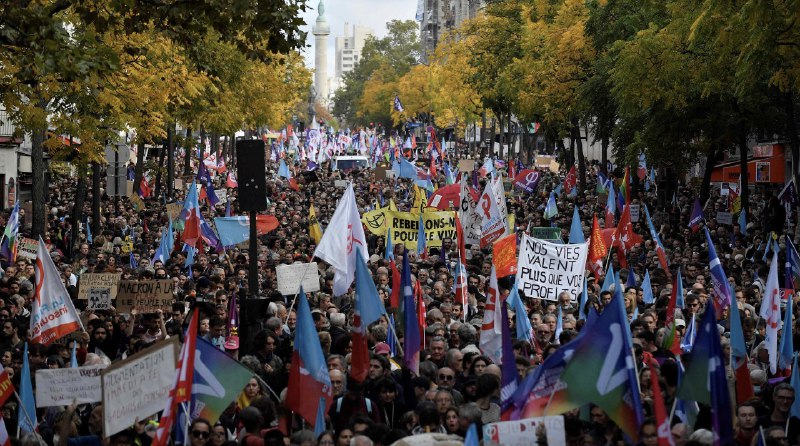 Europe plots the Winter of Revolt

140,000 people take to the streets of Paris and a major strike is expected this 3rd. Protests and strikes erupt in other countries. The struggle for the redistribution of wealth and political change resurfaces – under the leadership, in France, of a renewed left

“I want a 52% increase, as the CEO [executivo-chefe] from Total”, demanded a poster. “Stop tax evasion,” harangued another. “Even vegans want to taste the rich,” scoffed a third. On the cold afternoon of yesterday (10/16), in Paris, 140,000 people summoned by the leftist Nupes coalition toured the French capital on a march “against expensive living and climate inaction”. Jean-Luc Mélenchon, leader of the coalition and former presidential candidate, addressed those present. Faced with rising inflation and the government’s resistance to fixing prices or taxing the exorbitant profits of oil corporations, he predicted a “convergence of struggles” in the coming weeks – starting with a “multiprofessional strike” tomorrow.

The march was not a solitary action. For three weeks, a strike in the fuel sector has been progressively spreading in France. In a third of the stations, the pumps are already dry. This Tuesday, the movement can receive support from transport workers, teachers and the entire energy sector. Signs of outrage have already reached Britain, the Czech Republic, Germany and Spain. Something is moving among the European majorities, at the exact moment when the governments of the “old continent” seem more accommodated to the “orders” of the markets, submissive to the USA and incapable of imagining alternatives.

Receive by email, daily, all the publications of the site

You are already subscribed and will start receiving newsletters soon. Good reading!

The movement that could riot in France began at the end of September, in the form of an oil union struggle. Total (French) and Exxon (US) refinery workers refused to continue working without pay increases. They pointed to the erosion of purchasing power by inflation (which is close to 7% per year). But they went further: they also claimed to receive part of the extraordinary profits earned by corporations in the first half of this year. Benefited from the soaring oil prices, they profited between 10 billion euros (Total) and 18 billion euros (Exxon), in the period. However, they earmarked the gains only for their shareholders and executives.

Gradually, the strikes spread. Over the weekend, half of the eight French refineries were shut down. Pickets sprang up at the entrance to the plants, and in some cases burning tires blocked roads. Fuel began to run out of gas stations. The government has hinted that it will resort to laws that oblige people to maintain activities considered “essential”. The threat ricocheted. It was also in solidarity with the oil workers that tomorrow’s interprofessional strike was set up.

But the strikes also touched an exposed wound in French society – which explains yesterday’s irreverent posters. By questioning the superprofits of oil companies, the movement “has shown many people how unfair the system is”, analyzed sociologist Bruno Cautrès, from the Center for Policy Research at the Sciences Po University. The political world is conniving with the rise in prices, the concentration of wealth and, now, the return to the use, by Europe, of the most polluting fuels, such as coal. European media became monothematic. Almost every headline highlights NATO’s (supposedly “fair”) war against Russia. The consequences of this conflict are treated as “inevitable collateral damage”.

The demonstration called by Nupes yesterday exposes the possibilities that open up to the left, when it dares to occupy the space of the alternative to the system. In doing so, Jean-Luc Mélenchon was 1.2 percentage points away from the second round in the presidential elections in April this year. Shortly thereafter, in June, he led his coalition to form the second largest bench in Parliament. Now, by proposing clear alternatives in the face of the crisis, he puts both the neoliberal government of Emmanuel Macron and the far-right of Marine Le Pen on the defensive.

For yesterday’s demonstration, Nupes formulated a contemporary agenda of demands, which clearly identifies with the needs of the majority and reaches the logic of capital in its weakest points. Rise in wages and social benefits. Freezing of energy prices, basic necessities and rents. Immediate taxation of super profits. Massive investments in ecological transition, in public transport and in agroecology – with the creation of local jobs. Lowering the minimum retirement age to 60 (the government wants to raise it from the current 62 to 65).

Some of these proposals will soon cause tension in Parliament. The vote on the Budget for 2023 is underway. Macron’s neoliberals are the largest caucus – but they don’t have a majority. They resist, for obvious reasons, passing the supplementary wealth tax. But they are afraid to put the proposal to a vote and may resort to a shameful provision (Article 49.3 of the Constitution) that allows it to be approved by decree. The far right, which throughout the world tries to present itself as anti-establishment makes facade criticisms of Macron. But, faced with a left that called the people to the streets, he refused to join – because his ties to the plutocracy would be in jeopardy.

Hopeful, Mélenchon said yesterday that he believed in a great wave of mobilizations. The next few weeks will tell if it will succeed – and tomorrow could be a decisive day. In any case, signs of discontent are spreading in Europe. In recent months there has been a wave of strikes in the UK, massive protests in the Czech Republic (against the war and famine), shutdowns in the airline industry in Spain and Germany.

Most analyzes see, in the current political landscape of the West, only two movements. The United States and Washington-allied governments attempt to militarily humiliate Russia and, in doing so, seek to frame China. At the same time, the far right grows in many countries – which takes advantage of the resentment caused by the increase in inequalities and the emptying of politics. France shows that there is ample room for the left when it dares to propose a new political horizon.

Did you like the text? Contribute to maintaining and expanding our in-depth journalism:
OthersFive hundred