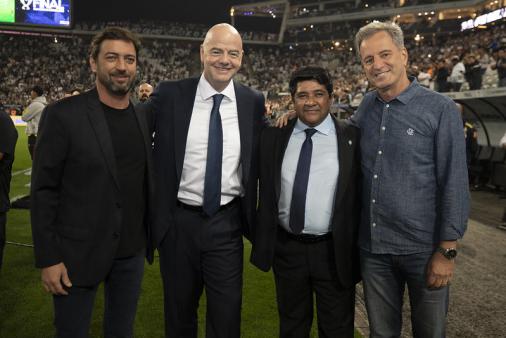 Flamengo x Corinthians: backstage heat up before the final of the Copa do Brasil and intensify rivalry

After a “peaceful confrontation” at Libertadores, the backstage of Flamengo and Corinthians got hot with the final of the Copa do Brasil. Off-field factors and topics such as refereeing entered the agenda and intensified the mood for this Wednesday’s final, at 21:45. The teams of Dorival Júnior and Vitor Pereira face each other at Maracanã.

VALUE OF TICKETS ON THE AGENDA

In the final scenario, the discrepancy in the price of tickets was the first among the boards. The definition, by Flamengo, of the value of R$ 400 for the visiting sector in the return game did not please Corinthians, which tried to dialogue without success.

+ Traditional Brazilian football stadium is in a state of abandonment; THROW! show pictures

In this way, the São Paulo club adopted the same price for the Flamengo fans on the first leg, at Neo Química Arena, and, with the revenue, “banked” tickets for Corinthians fans in Maracanãpaying R$ 310 of the R$ 400. The strategy, in turn, bothered the Rio club.

Value aside, all tickets for the visiting fans were sold for the finals. At Neo Química Arena, there were 2,803 red-blacks. At Maracanã, there will be around 3,800 Corinthians fans.

ARBITRATION IN ITAQUERA DISGUSTING BOTH

The goalless draw in the first leg, at Neo Química Arena, left the decision open, but the performance of the refereeing team displeased the two finalists. Corinthians, home team, complained of an unmarked penalty in a hand touch in a bid involving defender Léo Pereira. Flamengo, on the other hand, revolted with the yellow card given to the steering wheel João Gomes – who will serve suspension and is out of the return.

João Gomes and Dorival Júnior commented on the move and were firm in their criticism of referee Braulio da Silva Machado (Fifa/SC) – remember here and here. already the Corinthians sent official letter to CBF – who responded to the club evaluating how correct the decision of the refereeing team.

O postponement of the match between Goiás and Corinthians, for the Brasileirão, was the last fight between the finalists of the Copa do Brasil. At Maracanã, after Flamengo beat Atlético-MG, Flamengo’s vice president of football Marcos Braz spoke about the decision of the STJD: “Not even in the floodplain.”

Corinthians’ response came with Hérói Vicente, who expressed himself on social media. The club’s legal director published: “In the floodplain, arm is arm (except if Flamengo plays there)”, accompanied by a photo of referee Wilton Pereira Sampaio on the VAR monitor, with the phrase ‘post canceled by VAR’.