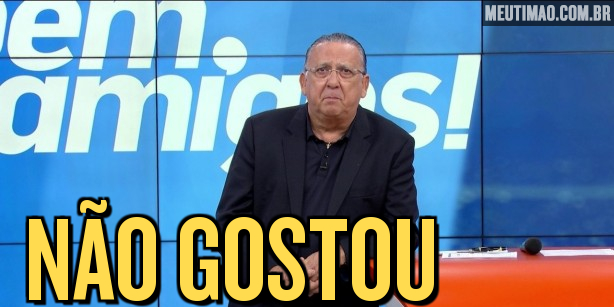 Corinthians was not allowed to have visiting fans in the duel against Goiás and saw the STJD accept the request to postpone the match last Saturday. The decision did not please the flamenguistas and was also disapproved by the narrator Galvão Bueno, who spoke of “shame on football”.

“Corinthians have one less game (in the Brazilian Championship) and that cannot happen. It is a disgrace for Brazilian football, for the CBF, for those who take care of the championship“, began the narrator and presenter on the program Well Friendsof SportTV.

Corinthians traveled to Goiás for the match of the 32nd round of the Brazilian Championship this Saturday, but did not enter the field after seeing its fans prevented from accessing the stadium in a decision issued on the same day. Members of the organized crowd who were in a caravan to the place returned to São Paulo with the news.

“‘Ah, but the holders had not traveled’. But a game is not made with 11. Perhaps, five who were playing could have to enter the game on Wednesday. It was absurd”, pondered the narrator.

The match was seen by Vítor Pereira and his commission as a possibility to give minutes to players recently recovered from injury, such as midfielder Maycon. The holders of the first game of the final stayed in São Paulo to continue the preparation.

“It couldn’t have happened under any circumstances. Sometimes I say it’s our fault because we’re too benevolent. (…) What happened cannot happen in Brazilian football. For the final on Wednesday (of the Copa do Brasil) which is very important, for the money it is worth, for the direct spot in Libertadores and for the Brazilian Championship in the fight for 4th place. Can not happen. The CBF could not have allowed that”, concluded Galvão Bueno.

The Public Ministry of Goiás defined this Tuesday that the game will have special security measures to take place with the presence of visiting fans. The date has not yet been set, but will be released by the CBF.

Corinthians and Flamengo face each other at Maracanã, this Wednesday, with a match scheduled for 21:45. With a first-leg tie, any equal score takes the match to penalties, while a win for either side guarantees the trophy.

See more at: Corinthians x Flamengo and Copa do Brasil.