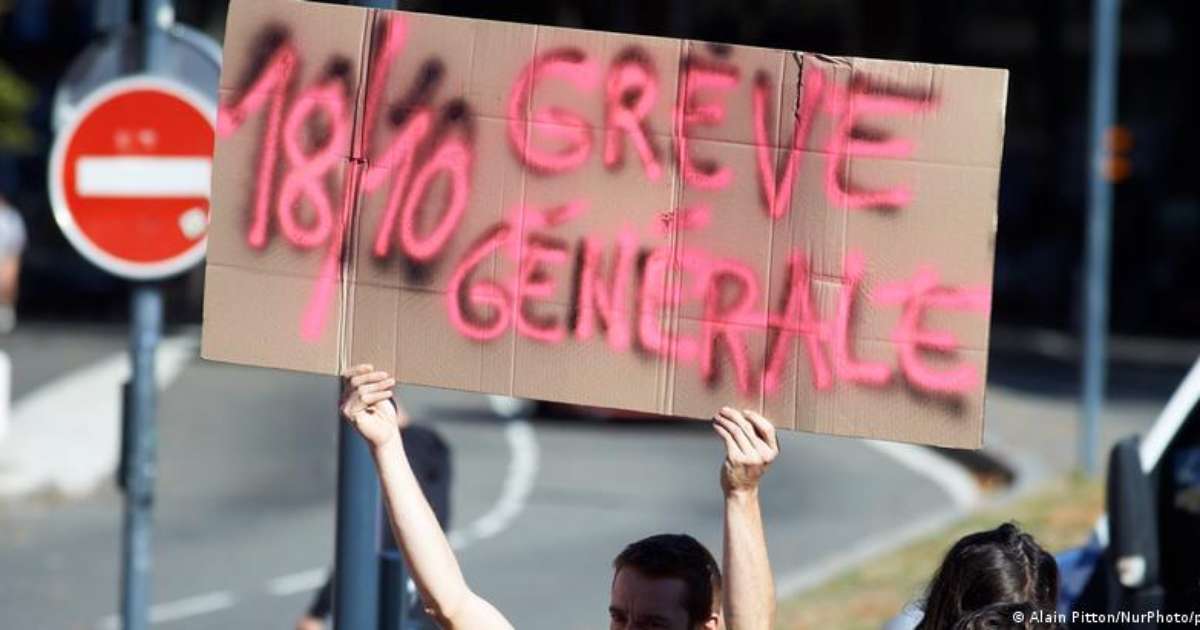 General strike in France for transport and other services

and protest against government intervention in strikes at refineries. A national strike called by several unions in France this Tuesday (10/18) caused stoppages in transport, suspension of classes and also affected public hospitals.

Railroad and other transport workers, some high school teachers and public hospital workers heeded a call from a union of oil workers for French industry to press for wage increases and protest government intervention in strikes in refineries.

Regional train traffic was cut in half, and about 10% of high school teachers did not attend classes.

For weeks, the strike at refineries has caused fuel shortages across the country. Impatient and worried, the government of French President Emmanuel Macron decided to force workers to return to work at distributors – a decision that drew criticism in the country.

The strikers won the support of the government’s left-wing political rivals.

The leaders of France’s four main unions – CGT, FO, FSU and Solidaires – decided to capitalize on the discontent and stagnation for a solution in the oil sector and called for a national strike.

A challenge for Macron

Tuesday’s protests were called after the leftist union CGT rejected a deal on a pay increase that oil giant TotalEnergies agreed with two other unions on Friday.

The CFDT and CFE-CGC unions, which together represent the majority of French workers in the group, agreed to a 7% salary increase and a financial bonus. The CGT wanted a 10% salary increase.

The shutdown of workers at refineries has become one of President Macron’s biggest challenges since his re-election in May. And as tensions mount in the euro zone’s second-largest economy, strikes have spread to other areas of the energy sector, including nuclear giant EDF, where crucial maintenance work for Europe’s energy supply will be postponed.

Amid the crisis, the government must approve the 2023 budget only through the use of special constitutional powers that would allow it to bypass a vote in parliament, Prime Minister Elisabeth Borne said on Sunday.

Thousands of people had already taken to the streets on Sunday to march against rising prices. Among those in attendance on the streets of Paris were the leader of the far-left La France Insoumise (Unsubmissive France), Jean-Luc Mélenchon, and this year’s Nobel Prize winner for Literature, Annie Ernaux.

Similar demonstrations have taken place across Europe in recent months – the main target being the impact of inflation. Thousands protested in Prague twice last month, especially against rising prices.

Airline workers have gone on strike in countries such as Germany and Sweden, as have railway workers in the UK, who have demanded that their wages keep pace with the rising cost of living.

Inflation surged around the world as economies rebounded from the Covid-19 pandemic and experienced exponential growth as the Russian invasion of Ukraine drove up food and fuel prices.

French inflation reached 6.2% and is the lowest among the 19 countries that use the euro community currency, according to Eurostats, the statistics agency of the European Union (EU). By comparison, Estonia last month saw a 24% increase in consumer prices from a year ago. The eurozone as a whole saw an increase of around 10%.