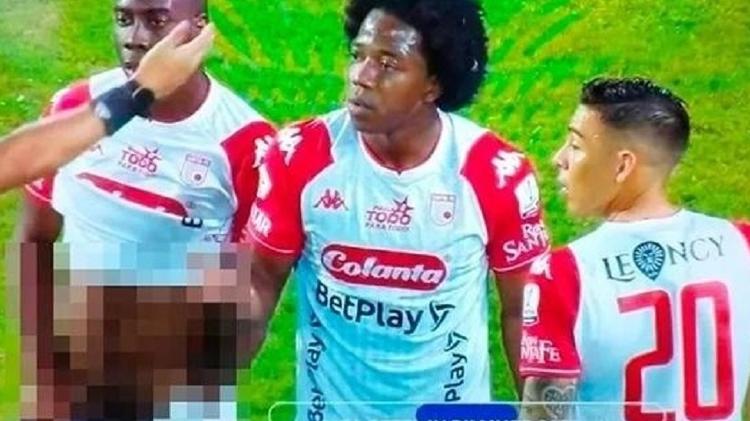 The Colombian Championship is coming to the final stretch and for the 18th round of the Clausura Tournament, Independiente Santa Fe visited Jaguares de Córdoba last Sunday (16), and was defeated 2-1, with two goals by attacking midfielder Pablo Cardales. But what drew attention was not the result of the match, nor the game itself, but a very unusual scene after 3 minutes of play: when signaling a foul near the Santa Fé area, referee Jhon Alexander Ospina Londoño, started to organize the barrier for the free kick to be taken, and defender Geisson Perea lowered his shoes and showed his private parts to the referee of the match.

Despite being very close to Perea, the referee did not notice the action and continued the game, but the web quickly reacted to the defender’s attitude. Fans who were following the match and journalists expressed themselves: “What a disrespect to Geisson Perea, a Santa Fe player, pulling down his pants when the players know that the TV camera can capture them at any moment”, wrote journalist Francisco Vélez in his social networks. In addition to the red card, the player could have been taken to a police station for indecent exposure.

Perea found himself in yet another controversy, after being seen smiling after Santa Fe was thrashed by Alianza Petrolera 4-0, at the time, Cardeais shirt 5 was asked after the game about nervousness in central defense and his answer was not of the best; in the midst of laughter he said “The question makes me laugh. If we lived in a sea of ​​nerves, we wouldn’t be where we are standing today. I have nothing more to say.” So far, neither the Colombian Football Federation nor Dimayor, the league that manages the country’s first division, have commented on the case.

How disrespectful Geisson Perea jugador de @SantaFe lowering the pantalonera when the players know that the TV camera can capture them at any moment.

Previous CRETL holds a Film Festival today (18) and Thursday (20). See which movies will be shown for free
Next Nokia Streaming Stick 800 released with Android TV, backlit controller and more