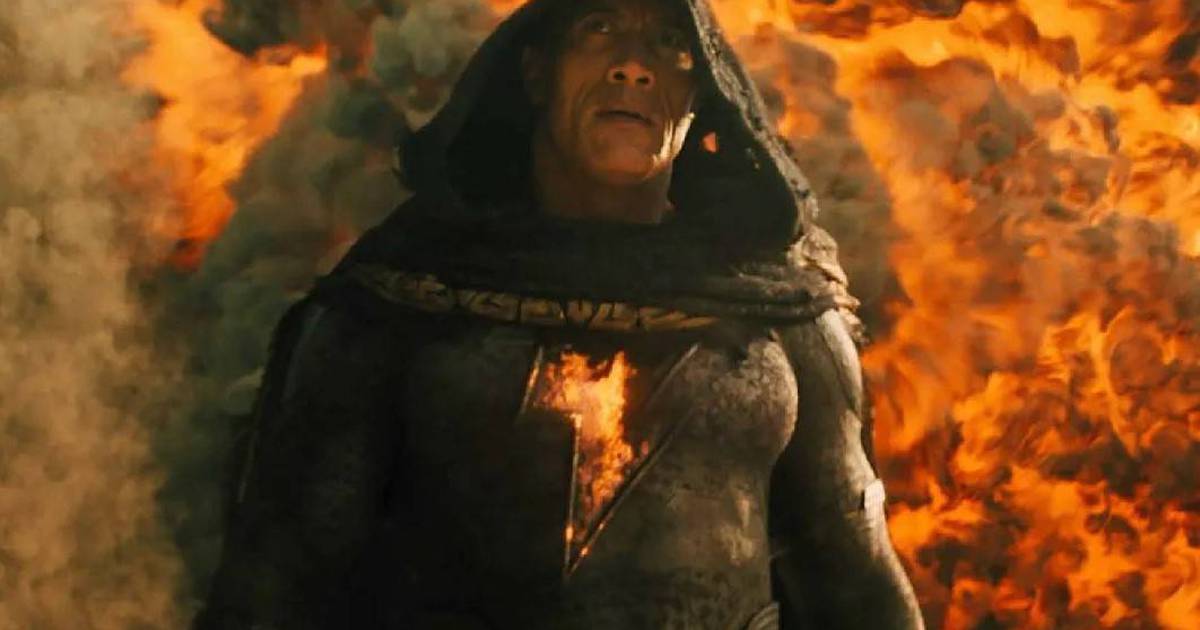 Read the review of Black Adam, DC movie with The Rock

Dwayne Johnson spent years trying to get a movie out of black adam of paper, and in that period the DC Universe of cinema saw the emergence and then the collapse of the whole project of interconnecting their stories from the mythology created by Zack Snyder to the Justice League. black adam opens in 2022 with the task of reanimating the fan base of this project, which tends to generate a disproportionate expectation for what the film has to offer.

Because after all, the feature film directed by Jaume Collet-Serra is still a typical vehicle of The Rock, like the adventures in the jungle in which the actor repeats the beige shirt and only changes the threat and his supporting cast. Few actors in Hollywood today achieve this feat of creating self-sufficient subgenres around themselves, shaped to immediately evoke in the viewer a sense of comfort and familiarity. By placing himself in environments of narrative formulas where everything is derivative, it’s as if The Rock said and proved that the only thing particular in these films is the actor’s own immutable figure.

And that tends to generate friction here, as the superhero movie genre itself is understood today as an end in itself, with its post-credits scenes that lead to the circular promise of bigger and better stories, of mythologies. increasingly intricate. The Rock’s vocation for lean, decontextualized and timeless attraction films – a vocation that he systematically puts into practice in the position of producer of his own features – creates in black adam two movies in one.

The first, the film that intends to insert itself in the mythology of the UDC, is frankly the most precarious. A champion of Kahndaq who fought slavery to free his people in antiquity, Teth-Adam is awakened in the 21st century by relic hunters in the Middle East. With SHAZAM’s powers inherited from the mages who saved him, Teth-Adam is soon registered as a threat by Amanda Waller, who places the Justice Society to nullify the target. The discomfort of seeing Waller manage in DC films both a group of outcasts like the Suicide Squad and the virtuous members of the Society is evident in the disinterested acting of Viola Davis (who seems to have participated in the filming via video call) and otherwise this discomfort is treated in Adão Negro as a non-fact.

The composition of the Justice Society itself seems to have the derivation, as a rule, from the most successful models of the Avengers with the family public. Doctor Fate plays Doctor Strange, the wizard who foresees and analyzes possible futures; Hawkman presents himself as an Afrofuturist figure, a mixture of Batman and Black Panther, piloting his version of the X-Men’s Blackbird; while Cyclone conjures up Storm right away, it’s Atom Smasher’s comic relief who most blatantly emulates his MCU counterpart, the also-comic Ant-Man. Black Adam remains visually a compilation of reminiscences from the Snyderverse, with his slow-motion powers and poses reminiscent of the Flash and Superman.

To understand these choices as neglect or offense would be understandable from the point of view of the fan who wants a consistent mythology film by film and also emancipated from the influence of Marvel. But perhaps it is more satisfying (or at least less frustrating) to look at the other movie that black adam carries within itself: the one that functions less as an offshoot of the UDC and more as a vehicle for The Rock, and which as such enters the superhero genre for the first time, filtering lessons and clichés from competing films, making a tabula rasa of expectations and groping for the potentialities that this worn-out genre still has within itself – even if only the potentialities of pastiche are left. A film that will only take advantage of Marvel and DC’s prescriptions in what matters to a pop power plant like The Rock, comfort, immediacy and familiarity.

This film takes a while to reveal itself to the viewer, but it tends to be much more rewarding, thanks to Collet-Serra’s talent for thinking the narrative around set pieces key, and to incorporate the entire CG concept into his directing process. When The Rock and the Spanish director signed a partnership from Jungle Cruise (2021), seemed like the perfect match, because Collet-Serra has the ideal profile for these “pure”, well-blocked action movies that value The Rock’s penchant for uncomplicated derivative entertainment. Jungle Cruise came, however, with the burden of making The Rock a watered-down version of Jack Sparrow, while the tabula rasa proposed by black adam extends to the character of the anti-hero himself, whose most identifiable trait of his past history in comics is the fan service of the pose on the throne, delivered at the end of the film.

Ie, black adam can be understood in a way as a regression and a debugging of the genre itself. Before being that grumpy movie that The Rock has been taking to his publicity interviews, which “will change DC’s power hierarchy”, black adam is a film that returns to an almost embryonic and immaculate state of current superhero movies, before all the ties of mythology and the endless crises of personality and guilt. Its most immediate kinship is with the first The Avengers (2012), in the sense that the primary concern of black adam it’s putting your action figures to fight, and trusting that the rest of the narrative will build around that, with the license of the occasional autoironic commentary on the genre itself.

Believe in black adam it’s believing that a film like this can go from the canatrice pose to the catharsis of the brawl in a second, and go back and forth on that axis over and over again. The only dramatic ballast necessary is to elect a teenager as the spectator’s representative within the film, because it is the vaccinated look of this character – which textually tells us how Black Adam should behave as a product and brand – that will disarm our expectations for a film of “elevated” superheroes. black adam knows he can’t leave too much breath in the action, at the risk of falling apart if we take too much notice of his poverty, so in the scene where the heroes plan a way to get into the climax scenario it’s obvious that Teth-Adam is going to force an ellipse in the exposure, at the base of the beating.

The moral argument about what it means to be a superhero, which puts Teth-Adam before the Justice Society in the plot, doesn’t lend itself to much other than justifying the beating. Collet-Serra knows that underlining this dilemma has become a compulsory thing at this late stage, after 20 years of relentless hegemony of Hollywood films of the genre, and he gives the question the false importance it demands. It is not in the adolescent’s metalinguistic dialogues that black adam proves to be more self-aware: it is in its own shameless way that the film adheres to the tired rules of the genre and embraces pastiche and derivation.

I wake up then to what fits or not to do within what is given to you, black adam he can finally free himself to perform a competent sensory show, which does not require prior knowledge or even much investment of attention. What’s left to show and tell in a superhero movie in 2022, anyway? Collet-Serra goes through the debugging that the project required and then does his best: elaborating situations that combine computer graphics and live-action in a harmonious way, imagining spatially zealous scenarios that are capable of transporting, in the action, the spectator into a believable fantasy. One hundred and eighty million dollars in the Spaniard’s hand becomes a suggestion of 250 million, due to his ability to convincingly situate us in the action.

Even if black adam continue to be staged in imitation of an Arab metropolis with two streets and a square, with characters whose countenances sometimes seem deepfakes of themselves ($180 million doesn’t pay much in blockbusters these days), the director makes the budget work. There’s plenty of smoke and mirrors to cover up the obvious shortcomings, which Collet-Serra makes up for with impressionistic CGI; the rubbery texture of the actors’ faces dissolves in this impressionism, when the fights are transmuted into an abstract pyrotechnics of flashes and trails of color and light. In slow motion, this aestheticization perhaps resembles Zack Snyder’s style, but the difference here is that Collet-Serra does not intend to formulate a serious judgment about the world; his film is only concerned with the primacy of effect.

The results of this are punctual but very consistent: the first clash of Teth-Adam and the JSA in the crater of the square; the fight scene that looks like a painting of Teth-Adam and Hawkman in the bedroom; all the ups and downs of the camera on the steps of the teenager’s building. Recognizing these values ​​may be difficult because we are used to noticing more about script than about spatial conception (even more in a film like black adamwhose aim is to make all this simply fluid and “invisible”), but just look at the series of scenic opportunities that a prosaic location like the floors and corridors of the building acquires in the hands of a director like Collet-Serra: entrances and exits to chases, fights and suspense from different angles, which involve us in this fantasy universe (it should not be forgotten that the Middle East of the film is the same as the oral fables of Arabia) with one or another well thought-out camera solution.

This kind of plasticity whose purpose is above all narrative seems to have been lost in a Hollywood that is only concerned with aestheticization when it is embedded in a new project of vanity by fashion filmmakers. the pastiche of black adam It wouldn’t be considered sophisticated by any of the current metrics in the industry today, but there’s no denying that it’s a great eye balm to come across a superhero movie whose portion of CGI appears to have been done by the same team that made the live-action. action. This fluency is so rare these days that it becomes a merit above all others (and above defects). There is a harmony and continuity here from live-action to CGI that is not, for example, in black Panther – a film that is otherwise considered more respectable than Black Adam from any other angle you look at.

of vain, black adam there is only the figure of Dwayne Johnson, who directs an old-fashioned producer-film for himself, executed by a most competent director-for-hire. Overshadowed by the brilliance of the duels and visual effects, The Rock even takes time to fit a record into his performance that turns Teth-Adam’s seriousness and few words into a channel for his well-known charisma, which finally happens when the plot begins. to hook one climax to the other. One would even expect an actor raised in WWE fights to come out calmly in a wrestling movie. None of this communicates with people’s expectations of integrated superhero universes, and that’s precisely why black adam perhaps it came as a refreshment for the senses.